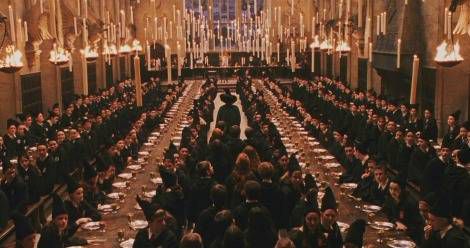 In mid-December, there was a really amazing event that various Barnes & Nobles around the country put on, which was the  Harry Potter Yule Ball. I’ll go to any Harry Potter event that Barnes & Noble cares to put on, and I’m clearly not the only one, because the place was absolutely packed. While wandering through the place, having fun, it reminded me of a train of thought I had been having some time earlier, when I was there for the Harry Potter and the Cursed Child midnight release party. 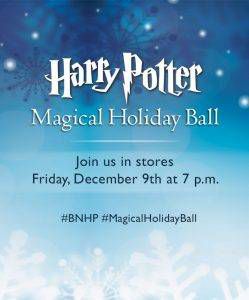 They called it a “Magical Holiday Ball” presumably worried that no one knew what a “yule” was.

But before I get into that, let me pause for a minute to unabashedly gush over the event I attended. It was a packed Barnes & Noble, so full that the party spilled out into the attached mall where nonplussed smaller stores and baffled passing shoppers looked on and wondered why there were all these hyper people of all ages in fancy dress costumes. The event was wonderful, with activities like making snitches out of Christmas ornaments and feathers – and here let me praise the hoards of people in line who, when they found out supplies were running low, vacated the line en masse, so the kids in line would make sure to get a chance. You are good folk. There were tarot readings (Divination, natch), and stamps, word searches, and a stupendously talented local band who turned the entrance of Barnes & Noble and part of the mall into a small dance party. And what makes all of this particularly astonishing is that, from what I’ve heard from multiple Barnes & Noble workers and managers now, it was done without any budget whatsoever. If you went to an event, everything you saw was done on a small, store level. And you might never have known. So well done.

Anyway, I got to thinking about this Harry Potter party, and all the midnight releases I’ve been to for the books over the years. When it was the midnight party for Harry Potter and the Cursed Child, I had looked around the bookstore and thought “I really missed this. It’s been so long.” And then I thought why has it been so long?

As much as it is a tremendous joy to me to attend these Harry Potter parties, it’s also a bummer to me that they’re the only ones I get to go to. Why don’t I have more midnight release parties to plan around, in the book world? Or just more events? After all, this Yule Ball party wasn’t in support of any release at all, it was just there for its own glory.

Why don’t we have these for other authors?

One could debate that they aren’t popular enough, and I suppose that might be true. Harry Potter engenders a particularly focused and rabid fan base (of which I am a full-fledged frothy member). But that doesn’t mean it would be impossible to do for others.

Let’s play with a couple examples. And no, I’m not fussing about the logistics, cost, or realism of doing these because I’m not a bookstore manager, and also I’m terrible at all of that. Pie in the sky dreaming is so much more my wheelhouse.

At first I was trying to put together a Stephen King party in my head, but that proved really tricky. What happens with the cosplay? Some poor shopper comes in and finds Barnes & Noble with 300 Gunslingers and 400 Pennywise the Clowns and that poor shopper is never well again. And what activities do you do? Chop the ankle off Paul Sheldon, but blindfolded? So the better idea here is to remove the party off-site to a movie theater, I think, where we show either one or more Stephen King films (show all of The Stand, or everyone can laugh at the supreme dorkiness of IT) while people are in full King geek-out mode. Do raffles and drawings, just like at a Harry Potter party. Cart over a truckload of Stephen King books. And related books. Bring over a wealth of horror novels that would appeal to Stephen King fans. This would be a great time to heap up some Peter Straub, some Poppy Z. Brite, some Lauren Beukes, and so forth.

Then what I basically realized is that aside from Harry Potter, what we should have are genre parties. That broadens things out wonderfully. Not Stephen King, per se, but horror. A big horror party, ranging form the schlock to the actually scary. And we can go from there. Imagine a high fantasy genre party (I mean epic fantasy, not “fantasy party while stoned”). Come dressed as your favorite character from Shannara, from Lord of the Rings, Game of Thrones, whatever. A steampunk/urban fantasy party! That would be dorky as hell, but it would be fun and I would buy some goggles and be there straight away. Do a serious literature genre party where everyone turns up in Buddy Holly glasses and sweater vests and everyone cosplays as a serious middle aged white male, and everyone is issued a copy of Infinite Jest at the door and – okay, I’ve gone a bit silly just now. Infinite Jest is too big and heavy. They’ll be issued Atlas Shrugged instead.

The point I’m making is that the parties are awesome, and I wish they didn’t need a Harry Potter release as an excuse to happen. These genre parties I’m talking about could still be structured around book releases, using someone as an excuse. A new Neil Gaiman title makes a good fantasy party excuse. A new Stephen King, whoever else you can think of. Take a popular author, heap up their books, declare a party, and I bet people will flow in. Particularly if its a regular event. Hell, I bet you can even get volunteers and supplies.

Please, Barnes & Noble, if you’re listening, make this happen for me. This sounds very much like the kind of thing that indie bookstores can (and do, to some extent) jump all over, and there’s no reason they should get to have all the fun on this front too.

One final thought, though. If you do do this…come on, give your stores a small budget, please. It doesn’t even have to be much. They do spectacular things already with no budget at all.