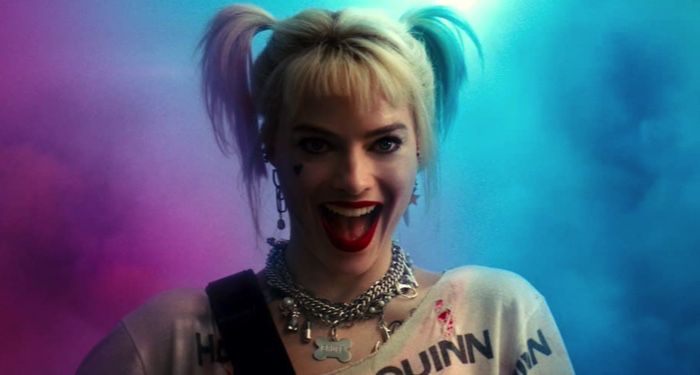 Superheroes have been around a long time, and most of the characters and genre conventions are pretty well established. But did every character always look and act the way we expect them to today? In this series, I’ll be looking at the first appearances of iconic superheroes to see what’s familiar, what’s fallen by the wayside, and what’s goofy as heck. Today: Harley Quinn!

My previous entries in this series were Superman (debuted 1938) and Captain America (debuted 1941), so it might seem a little weird that I’m featuring a character who didn’t make the scene until 1992. But that does make her nearly 30 years old (which makes me feel like an ancient, moldering corpse, but that’s beside the point), and she’s hitting the big screen again this month in The Suicide Squad, so it seemed fitting to take this time to look at her origins. As is fairly well known, Harley first appeared on Batman: The Animated Series before eventually making the leap to the comics, so I’ll be covering both her animated and main universe comics debuts here.

Harleen Quinzel, AKA Harley Quinn, debuted in the BTAS episode “Joker’s Favor,” which first aired on September 11, 1992. She was created by showrunners Paul Dini and Bruce Timm, though I’ve always thought that her original voice actress, Arleen Sorkin, should get a creator credit as well, since that distinctive voice is a big part of what initially made her appealing enough to bring back for multiple episodes in bigger and bigger parts.

Harley has a relatively small role in “Joker’s Favor,” which is mostly about an ordinary Gothamite named Charlie who finds himself in hot water when he yells at a bad driver who turns out to be the Joker. Joker agrees to spare his life in exchange for a single favor, to be collected at a later date.

Two years later, the city decides to throw a testimonial dinner for Commissioner Gordon, and the Joker is pissed — and we see Harley for the first time, cute as a button in her classic costume. She’s a simple yes-woman at this point, though significantly brighter than the male henchman in the gang. Mostly she’s there to applaud the Joker on command, although in one scene she’s randomly giving him a haircut, which is a pretty great visual gag.

Joker tracks down Charlie, who has changed his name and left town, and cashes in on his favor, insisting that Charlie return to town or his family will suffer. The requested favor is simple: Harley will bring a giant cake into Gordon’s dinner, and Charlie has to open the door for her. That’s it. Smelling a rat, Charlie manages to signal Batman — but he does show up at the dinner and open the door as he’s been told, only to find that his hand is now glued to the door, because of course it is.

It’s in this scene that Harley really shines. She wheels in the cake, dressed as a demure policewoman pin-up in a blue cap and pencil skirt, whacks Harvey Bullock in the shin for sleazing at her (valid), and recites a poem before blowing a police whistle that…makes all the candles in the room suddenly fire a gas that immobilizes all the cops? Sure, why not.

The cake opens and the Joker pops out, to Harley’s loud applause (and Arsenio Hall–style fist pumping — hey, it was 1992). Joker presents a bomb, which Harley pins to Gordon’s chest before kissing him on both cheeks and following the Joker out of the room, despite Charlie’s protests. As they leave, we get one of the best exchanges in the episode: “Guess I’ll need a new hobby now that old Charlie’s pfft,” Joker muses, to which Harley replies, “Macrame’s nice.”

Of course, Batman shows up, gets rid of the bomb, frees Charlie, and vanquishes Joker’s henchpeople one by one. Harley tries an innocent act on him while grabbing a knife, which does her no good. “Oy, beauty school’s starting to look pretty good right now,” she says after he cuffs her, so her backstory as a psychiatrist doesn’t seem to have been conceived of yet.

It’s Charlie who gets the final victory over Joker, terrorizing him with a bomb that turns out to be a fake and finally turning the tables on his tormentor until he gives up the info he’s been using to keep tabs on Charlie. Batman hauls the Joker off to jail and Charlie goes home to his family, finally free. The end!

It’s easy to see why Harley was an instant fan favorite: she’s adorable, she’s funny, and she gives the Joker someone to talk to. Still, there’s not much there there at this point. She’s a gangster’s moll with a clown theme, the end.

Harley quickly became a more nuanced character. In her third animated appearance, “Harley and Ivy,” which first aired in January 1993, she began her iconic friendship (and later more) with Poison Ivy. And in December 1993, DC published “Mad Love,” a one-shot comic that finally explored Harley’s backstory and the abusive dimension of her relationship with the Joker.

But although she was a frequent and beloved recurring character in the DC Animated Universe and its tie-in comics, it still took her seven years from her debut to finally appear in the main DC universe, in Batman: Harley Quinn #1 (October 1999), a 50-page one shot by Paul Dini and Yvel Guichet. At the time, the Batbooks were in the middle of their massive, year-long No Man’s Land storyline, in which an earthquake left Gotham even more of a chaotic hellscape than it usually is.

The comic begins with Poison Ivy finding a dazed and injured Harley in Robinson Park. Though they are not yet friends, Ivy takes her home on a whim and cares for her, and Harley in turn relates her tale of woe, which is functionally the same as her animated origin: she worked at Arkham, she fell in love with the Joker, she found herself committed to Arkham. In this case, however, it’s the quake that frees her from her cell.

Harley dons her classic costume, tracks down the Joker, and convinces him to let her join his gang. Therein follows a period of what she describes as bliss but what the art shows is Harley devotedly building a hideout for the Joker and obeying his every command, while he is completely apathetic to her.

When Batman finally rears his pointy-eared head, the Joker sends Harley in to distract him while he makes a getaway. But Harley manages to cartoonishly bamboozle Batman and catch up to the Joker…so the Joker drugs her and sticks her in a miniature rocket death trap.

Over a video monitor, he confesses that he’s begun experiencing tender feelings toward her, which he doesn’t want to feel, so instead, he’s going to kill her. To be honest, I don’t love this — the idea that the Joker actually returns Harley’s feelings seems both out of character and like romanticizing their relationship as engagingly twisted instead of toxic and nightmarish. Not a great start.

Anyway, the rocket crashes in Robinson Park, bringing us back to the hurt and angry Harley we saw being rescued by Ivy at the beginning of the issue. Ivy gives Harley a concoction to prevent her from being poisoned by their close proximity (real subtle, Pam), and Harley starts bouncing around the greenhouse. Turns out said concoction also increased Harley’s strength and agility, for…reasons. Basically, cartoon bouncy powers. Ivy explains that she gave Harley this gift because she sympathizes with her, but because she’d also like to see Harley give Batman his comeuppance.

Harley wallops Batman over the head with a cartoony mallet, taking him out of the fight. The Joker simperingly apologizes, Harley instantly forgives him, and the two of them escape in a speedboat, leaving Batman nursing an aching head and grimly determined to take them both in.

And there you have both of Harley Quinn’s debuts! She is a far cry from the fourth-wall-breaking antihero she is today, but the germ of her appeal is evident in her animated debut, and by 1999 we’re starting to see her inching away from the Joker and toward Ivy. And I truly, truly love that she outsmarts both Batman and the Joker in her first comics outing. Just fabulous.

Harley Quinn has now grown to be one of DC’s biggest moneymakers, absolutely on par with Batman, Superman, and Wonder Woman, and after the delightful Birds of Prey, I’m genuinely excited to see her third big screen outing in The Suicide Squad. And in less than 30 years! That’s pretty darn impressive. Way to go, Harls!