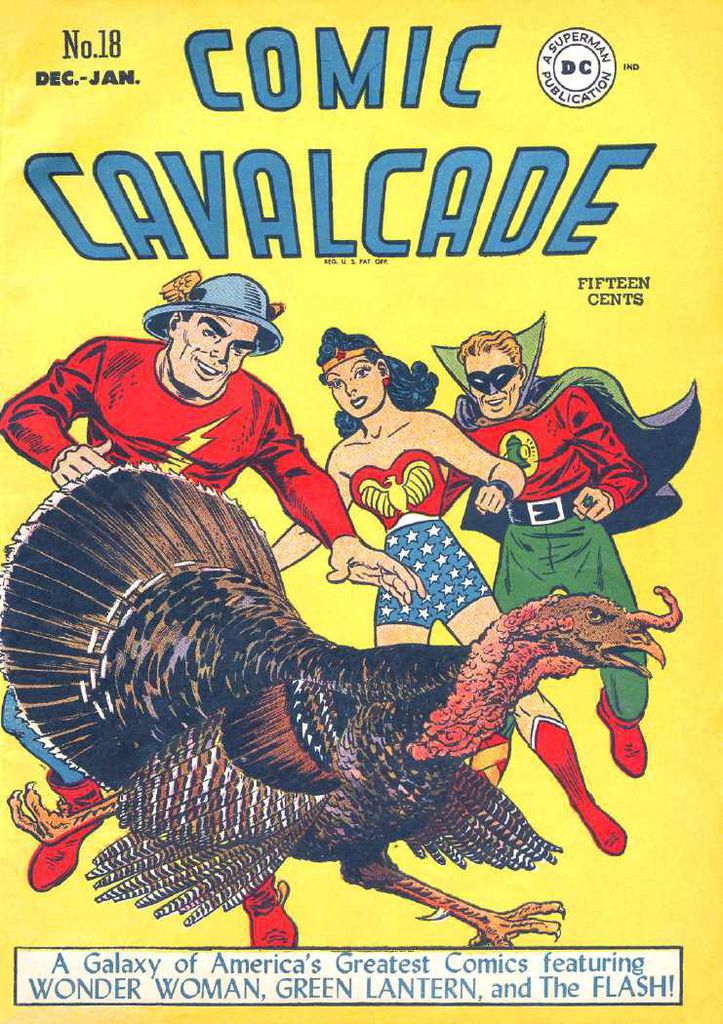 It’s Thanksgiving here in the United States, our first such holiday in the life of Panels. We wanted to take a moment to clasp hands and think on the bounty that is our joyous jurisdiction, that cornucopia called comics. Here now, we pause over our yams and recount and recall all those sequential art pleasures for which we feel continually blessed.

Me, I’m thankful for my team, especially here at the first leg of our adventure. Some are my steadfast foxhole companions of many years, and others are newfound comrades quickly earning my eternal admiration. They are the Panelteers, and I am grateful every day for their willingness to wear their hearts on their sleeves and share their stories. Panels doesn’t have a house voice or house style; it has many. We don’t always agree, but that’s okay. That’s terrific. That sense of pluralism is vital at any table. Oh, and those two screenings of Guardians of the Galaxy! And Abnett and Culbard’s Wild’s End, too. And Flash Gordon by Parker and Shaner! And Superior Foes of Spider-Man by Spencer and Lieber! And Ms. Marvel by Wilson and Alphona! And Daredevil by Waid and Samnee! And and and– Paul Montgomery

Being inspired by Panels writers and readers to try comics outside my comfort zone. –Andi Miller

Marvel Unlimited. All the fun of reading comics on a computer I remember from college with the added bonus of being, er, legal. — Josh Christie

The #bgsd community, spearheaded by the incomparable Kelly Sue DeConnick: I would not get half as much stuff done (or have half as much fun in the process) without them. — Jenn Northington

Digital comics. As much as I love having physical collections and being able to see what I’ve got up on my shelf and all that, I have depended on digital reading for the last 1 and ¾ years for a lot of reasons: cost-effectiveness, space, ease of access, etc. Books are one thing… a lot of new releases are available in Japan, but Western comics aren’t always so easy to find. Services like ComiXology and sales from Humble have been gods-sent. — Kristina Pino

Smart comics-loving friends who knew just what to recommend to get me hooked. –Rebecca Schinsky

The Panels community (and larger comics community), who has welcomed my ridiculous newbie questions with enthusiasm and has provided endless comics recommendations for me to try. — Swapna Krishna

Witnessing collaborations between writers and artists week in and week out, creating books that transcend mere words or art into something greater. — Chris Arnone

I’m thankful for escapism. This year in particular I really needed to exist outside my own head, and comics allowed me to do that. If not for the momentary respite from reality, I’d probably have pulled all my hair out by now. — Ryan Haupt

I’m thankful for the writers, artists and designers who are working really hard to push the medium of comics forward. Whether it’s adding diversity to the mix, finding new ways to tell stories, or even just putting a new spin on old formulas, I feel like there are more creators than ever who are expanding the boundaries of comics storytelling — and that includes not just writing and art, but coloring, lettering, and new innovations in digital formats. All of this makes being a comics lover feel like you’re part of a movement. — Dave Accampo

I’m thankful for comics being a place where creators not only feel able to, but are able to succeed by creating the kind of art they love. 2014 has been a year full of projects and books that could only have been made by passionate, creative people following their muse. I’m thankful for a market that is getting hungrier for things like this, and for supporting people who are putting out such personal, powerful work. — Chris Rohling

The chance to go to comic conventions with my nieces and nephews. Their enthusiasm for images and stories and the act of creation is always sure to recharge my own. Also, creators like Raina Telgemeier, Gene Luen Yang, and Jeremy Whitley, who embrace the young audience, and shows like Small Press Expo and Baltimore Comic-Con for providing kid-friendly spaces. — Caroline Pruett

The people who love this medium so hard that they want to share it with absolutely everyone. — Sigrid Ellis

I’m thankful for more and more people embracing the medium as a whole. I’ve personally witnessed a shift in many people from “comics are for nerds” to “comics are kinda neat, I like the movies” to picking my brain about what comics they should check out. I’m thankful for those that keep an open mind and read because they want to read. — Eric Margolis

I’m thankful to be a part of the Panels team, which gives me a reason to think about this medium in a more thoughtful, thorough and analytical way. It’s great to have a reason to step away from my own bookshelf for a bit to get a sense of what others are reading and how they think about these stories. I’m thankful for the ability to visit different worlds through comic books, be it Gotham City or Knowhere or Victorian England. — Nick Baker

I am primarily thankful that I am Canadian and ate my big holiday meal a month ago like a normal person. But in comics, I am thankful for the diversity of voices to be found in the indie and alternative comics world. Being a reader of comics has allowed me to learn about being a john, and life in Pyongyang, and what it’s like to cope with a dying parent, and what it means to be black in America, and what it’s like to realize your friend is a serial killer, and on and on and on. The narratives of these experiences are troubling and fascinating and heartbreaking and empowering, but above all they are essential to making me a whole human. — Brenna Clarke Gray

So, what are you folks thankful for this year?