On this day in 1851, Herman Melville’s manic work of genius Moby-Dick was published. It was ripped apart by critics and contributed to Melville’s lack of success as an author (he spent most of his working life as a New York City customs inspector), but is now recognized as one of the greatest novels from an American author. To celebrate the day, browse this collection of five interesting/goofy Moby-Dickish sites:

One Drawing for Every Page of Moby-Dick 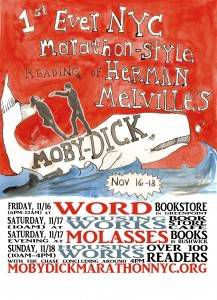 From November 16th to November 18th there will be a marathon readalong of Moby-Dick that “will span three days, three bookstores, and two boroughs, featuring over 100 readers.”

Moby-Dick the computer game. No joke.

A searchable digital version of Moby-Dick