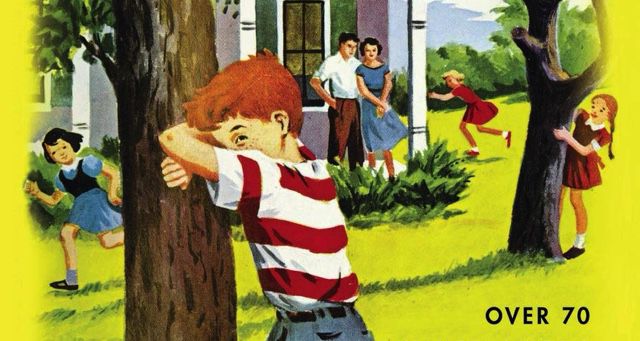 Kid detective books are so popular and so numerous that it’s almost impossible to keep track of them all. One series that has fallen through many readers’ mental cracks is the Happy Hollisters. But do these ‘dorable detectives deserve such an ignoble fate? Let’s find out! 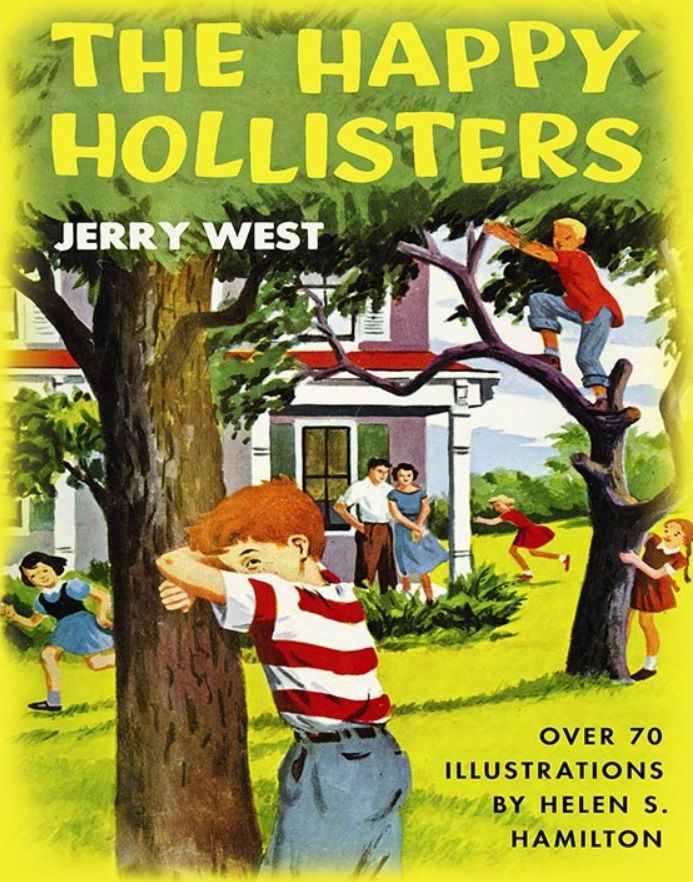 The Happy Hollisters series ran from 1953 to 1969. It follows a relentlessly optimistic family of seven: children Pete, Pam, Ricky, Holly, and Sue; parents John and Elaine; plus their dog, six cats, and later a donkey. After moving to the town of Shoreham, where John has acquired a hardware/toy store, the kids have all kinds of adventures. These range from finding lost treasures to dealing with bullies who really ought to be sent to reform school.

I only know about this series because my mother still has most of the books from when she was a kid. It was part of some kind of book club. (This one, I assume.) That would explain the “book club edition” notation on a lot of the dust jackets. Those that don’t have this note include the price instead: $1.50. 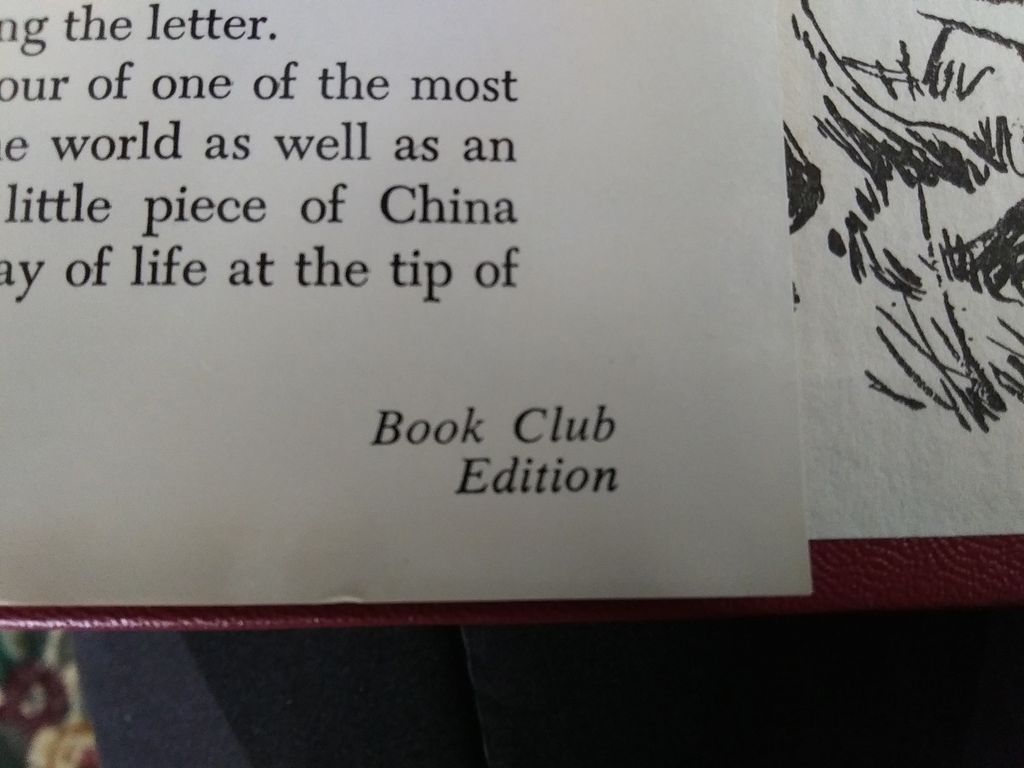 Out of the 33 books in the series, we’re only missing one. Since I’ve already read the 56 original Nancy Drew books, I figured why not do the same for the Happy Hollisters?

So I did. I shot through the lot in just over a month. Now I have Opinions.

What I Learned From the Books

The Happy Hollisters formula runs like this: the Hollisters learn of a potential new adventure. For whatever reason, they can’t pursue this adventure right away, so they do something vaguely related for a few chapters. Then they finally embark on their new mystery. Along the way, they make friends, lend a helping hand, and leave everyone except the bad guys as happy as they are.

I don’t remember how I felt about them as a kid, but as an adult, reading these books is almost relaxing. They have the pacing of a sedated turtle, so it feels low stakes even when it’s high stakes. Everything always works out quickly (except with town bully Joey Brill, who never gets more than a slap on the wrist, even when his actions involve animal abuse or vandalism). This being the ’50s and ’60s, even the dangerous moments tend to be mild and G-rated. If you can’t imagine it happening on The Andy Griffith Show, it doesn’t happen here. 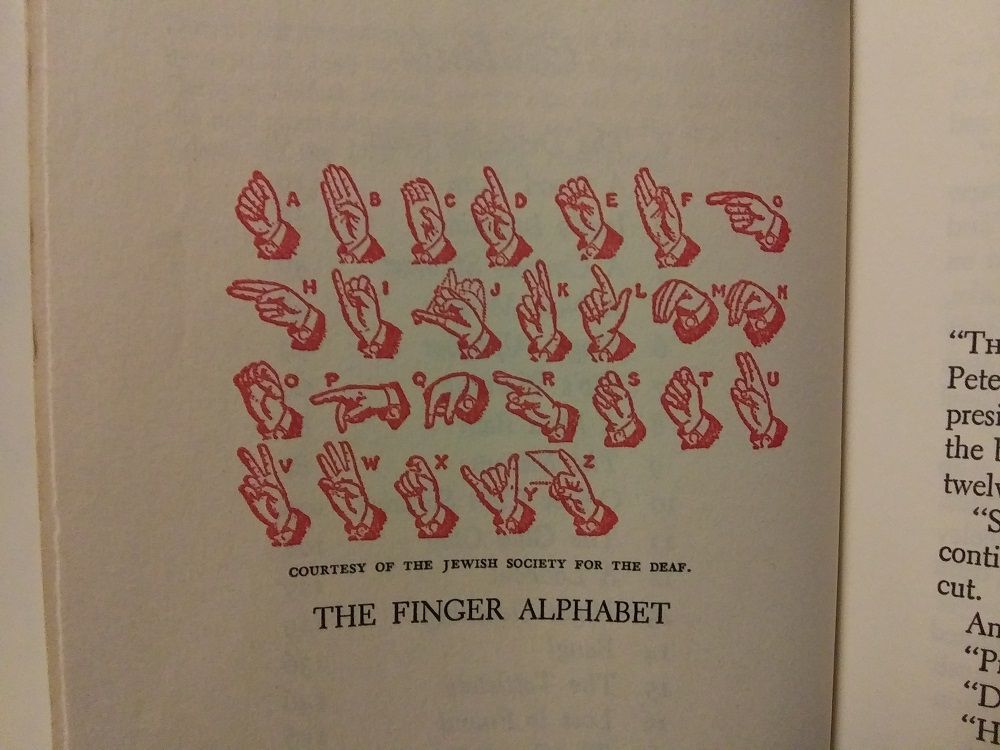 Of course, you have to keep an eye out for the occasional bit of BS. In The Happy Hollisters at Snowflake Camp, a vet lets a fawn return to her mother with a bandaged, broken leg because the mother deer will somehow magically know when it’s the right time to remove the bandage. And don’t get me started on The Happy Hollisters and the Indian Treasure, where the author claims he did research on Native Americans and then employs every stereotype you’ve ever heard of.

And that brings me to my biggest issue with the Happy Hollisters books. They are…quaint. Old-fashioned. A product of their times.

The sexism mostly manifests in pushing traditional gender norms. The girls always help with cooking and cleaning, and the boys always help with fishing and repairing. There are no female villains, and if anyone gets left out of a particularly exciting or climactic part of the mystery, it’s the girls. It’s eyeroll-inducing, but expected.

The racism is where this series really goes above and beyond. Despite the presence of a recurring Native American character—Edward “Indy” Roades, who works at John Hollister’s store (yes, “Indy” is short for exactly what you think it is)—the amount of anti-Native racism is astounding. Even less offensive books often feature the kids casually pretending to be “Indians,” complete with stilted speech and war whoops, or “Eskimos.” As a bonus, The Trading Post Mystery has them recreate the horrid Dutch Christmas tradition of Black Pete.

Now, as a history nerd, I like these books because they’re a(n idealized) time capsule. The Hollisters send telegrams! The airplanes have no security! The kids write—not email, not telephone, but write—to the organizers of a kite flying contest to make sure girls are allowed to enter!

Okay, obviously that last one isn’t a good thing. Still, it’s fascinating to me to see these little details of life in a different era. But all that doesn’t mean I’m about to let the racism slide because “that stuff was okay back then.” No. It absolutely was not okay, even if the author and illustrator apparently thought it was.

Speaking of the author and illustrator…

What I Learned About the Books

The Happy Hollisters series is a product of the Stratemeyer Syndicate, the company behind Nancy Drew and the Hardy Boys. Their target audience skewed slightly younger: the Happy Hollisters books were written in a more simplistic style and had more illustrations.

The author, Jerry West, real name Andrew Svenson, also worked on Stratemeyer’s other series. But presumably the Happy Hollisters were special to him, as the characters were based on his own large family. This may explain why, unlike with Stratemeyer’s other pen names, “Jerry West” was not communal; Svenson was the only writer to use it. Illustrator Helen S. Hamilton contributed the book’s lively illustrations and covers.

The entire series has been republished over the past ten years. Hopefully, these reprints have at least added a warning about the racism, if not eliminated it entirely. I doubt it, however. For one thing, they’ve left the horribly racist cover of Indian Treasure intact. And while poking around their website, I found this blog entry about what “wholesome, moral stories” the Happy Hollisters books are. They don’t even hint at the books’ outdated, offensive language and stereotypes on any blog entry I looked at. That includes this one about The Happy Hollisters and the Mystery of the Totem Faces, which, while not as bad as Indian Treasure, is still considerably more insensitive than a “wholesome, moral” story should be.

I also checked out the Talk Like a Happy Hollister page. This is a really cool feature that gives the history and definition of some of the now-obsolete terms used in the books. Some of them are quite extensive, like this one on flashbulb cameras.

Aaaand then you get to the entries on “gay” and “queer.”

They don’t want to talk about these words at all. I’m not going to speculate on why that might be, but it indicates a reluctance to acknowledge important issues and/or the more unpleasant aspects of Svenson’s work. 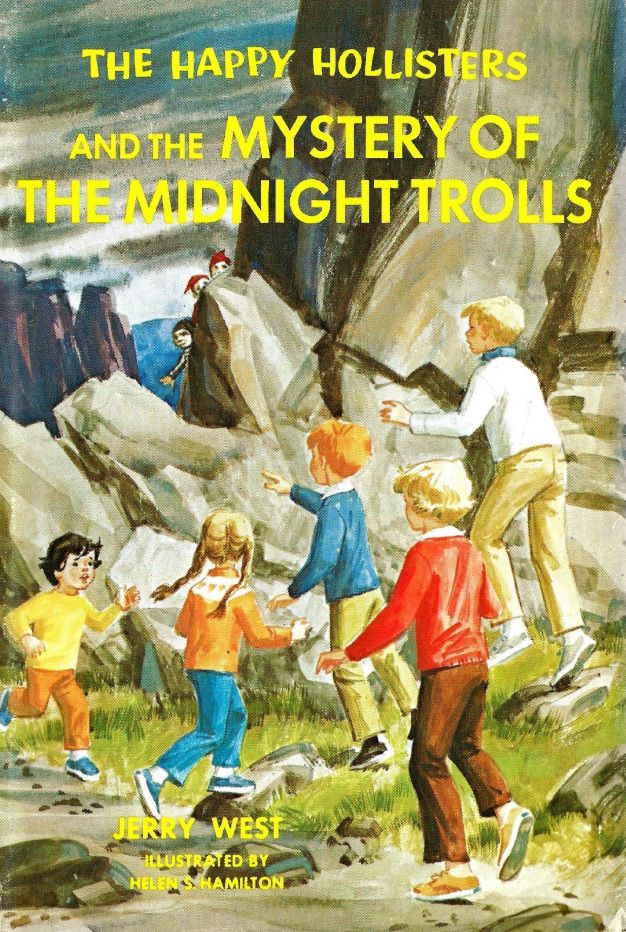 So what’s the verdict? Are the Happy Hollisters still a cheerful addition to your child’s bookshelf, or has time tarnished those eager smiles?

For whatever it’s worth, I don’t think Svenson was trying to be rude or malicious. The reason he included people of color in these books was to show that they’re nice, ordinary folks with interesting cultures worthy of study and respect. That’s more than I can say about the depiction of minorities in the Nancy Drew books. But while he clearly did research for each book, for whatever reason, Svenson never took that extra step to examine his own biases and how they undermined his point.

Obviously, good intentions can’t magic away the racism, or make it any easier for modern audiences to swallow. If you’re put off by anything you’ve read in this article, I don’t blame you. There’s no reason to read anything you feel uncomfortable with. There are plenty of junior detective books for you and/or your kids to enjoy without the problematic morals and disrespectful portrayals of minorities.

At the same time, I agree with author Candy Gourley (who in turn quotes Grace Lin) that banning such books outright is not the way to go. There is still plenty to love about books with offensive content, so long as they are placed in their proper context. You don’t have to feel bad for liking these books or being curious enough to read them; just don’t sweep their shortcomings under the rug.

If the reissued books have indeed removed the racist content, great. But if not, and if you want to give these books to your kid for any reason—whether you enjoyed them as a child, your kid likes mystery stories, whatever—know what you’re getting into. Talk to your kids about the outdated morals and terminology they contain, and why these things are not and never were okay. Who knows? Maybe the Happy Hollisters can continue to be educational in a way their creator could never have imagined.