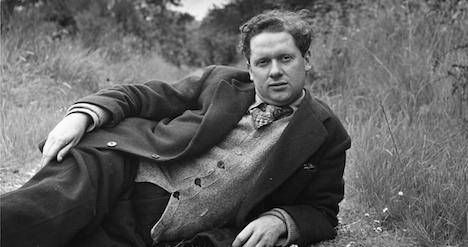 I always think it better to celebrate a birth than a death. So, in honour of the great, late Dylan Thomas’s birthday – 27 October 1914 – I thought I’d talk about a visit I made a few years back to Laugharne (pronounced somewhere between ‘lawn’ and ‘larn’) in South Wales. Dylan lived in Laugharne for stretches of his adult life, most notably moving to the Boathouse overlooking the Taf estuary in 1949. This move brought a sense of stability and renewed creativity for Thomas in an often tumultuous life.

True to its reputation, Wales rained on us. It started as soon as we crossed the Severn and didn’t let up for the rest of the journey. I don’t think I’ve ever driven through such intense rain, it struck the already slick ground and lashed upwards strangling the headlights. The windshield was a lonely porthole into a submerged world, as we navigated increasingly narrow, rolling, winding country roads.

We arrived late, barely looking around us as we dashed from the car to our cabin. It supposedly had views of the bay, but by then the night and rain had closed in like a hood.

“A good poem is a contribution to reality. The world is never the same once a good poem has been added to it.”

The next morning, we gingerly emerged to be greeted by glorious sunshine and the most stunning view. This great sweep of sand and water below us, calm and still, a pitted mirror reflecting earth and heaven. It was beautiful. It is unsurprising that Thomas came here to seek inspiration, describing it as ‘this place I love and where I want to live and where I can work’. His famous writing shed – a replica of which recently went on tour! – is situated further up the slope from the Boathouse and faces out over the bay. The first poem he wrote from this vantage point was Over Sir John’s Hill. It is both a description of the birds living and hunting over the estuary and a meditation on life and death:

Where the elegiac fisherbird stabs and paddles

Shallow and sedge, and ‘dilly dilly,’ calls the loft hawk,

‘Come and be killed,’

I open the leaves of the water at a passage

And read, in a shell,

Death clear as a buoy’s bell;

The poem is a wonderful piece of nature writing. It captures the melancholy air the area can take on, particularly when the clouds gather and dress the water in dappled grey. It’s a changeable landscape, seemingly tailor-made for critics’ ideas of pathetic fallacy. Having read Thomas’s poem while overlooking the bay – and re-read it many times since – it has become intertwined with my sense of the place. I don’t know if I remember or imagine the hawk that glides across the sky.

“Somebody’s boring me. I think it’s me.”

My knowledge of Dylan Thomas was limited before our trip. Like most people, I was mainly familiar with him through his poem Do not go gentle into that good night, an emotive cry against the inevitability of dying and a plea to hold onto the vestiges of life:

And you, my father, there on the sad height,

Curse, bless, me now with your fierce tears, I pray.

Do not go gentle into that good night.

Rage, rage against the dying of the light.

From the two poems featured, you might imagine him a serious or even dour man, but he had a quick wit and was known as a raconteur, not liable to take himself too seriously – as you might be able to tell from the quote that heads this section. You can get a real sense of this when reading Thomas’s stories and humorous essays.

“An alcoholic is someone you don’t like, who drinks as much as you do.”

I’d recommend a visit to Laugharne for both its natural beauty and literary significance. The Boathouse has been converted into a museum where you can read and watch videos about Thomas and his family. You can stop by Thomas’s writing shed and see his desk strewn with papers and curled pictures pinned to the walls, visit the local pubs that were his haunts and walk down to the sea – being careful not to get caught out by the tide. 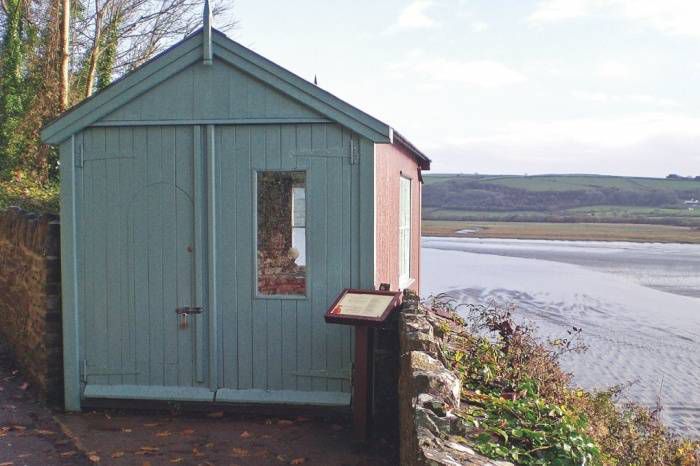 His was an often troubled life, particularly surrounding his personal relationships. He struggled with alcoholism, which contributed to his death at the age of just 39. One oft-repeated anecdote talks of how Caitlan, his wife, would lock him in his shed to ensure he worked on his poetry, before letting him out in the evening when he would head to the local pub. But rather than focus on that, let’s celebrate his life and works. On the 27 October, join me in reading Poem in October, written by Thomas on his own 30th birthday:

My birthday began with the water-

Birds and the birds of the winged trees flying my name

Above the farms and the white horses

In a rainy autumn

And walked abroad in shower of all my days

If you find yourself in Laugharne, you can even go on the Dylan Birthday walk, inspired by the poem and the paths he took as he meandered through the area.