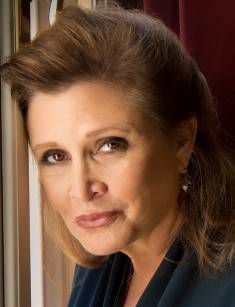 Dear Carrie Fisher, the Princess Leia buns you wore in A New Hope were totally cool, and you looked awesome. Don’t even worry about it.

The first time I watched A New Hope was on an old VHS tape. It might have been a bootlegged copy. I’m not for sure, but I can remember my aunt giving us a copy, and the tape was blank (normally there was a label or something). It was suspicious, but I loved it, and it influenced my life. You, or Leia, influenced my life. For example: I thought pigtail buns were the height of fashion.

Like you Carrie Fisher, we all sometimes have to channel our inner Leia. Maybe there are no clone armies to battle, but there sure are some shitty people on Twitter. Also, maybe there’s no Darth Vader, but there certainly is a Donald Trump, and given the choice between Darth Vader and Donald Trump, I’d choose Vader: yes he really sucked during the first two movies, but by the end he redeemed himself. I don’t think the same will happen with Donald Trump.

Last year, when I heard you’d been taken to the hospital I thought: this year’s a goddamn nightmare. Only a month ago I’d been charmed by your interview with Terry Gross on Fresh Air. You were promoting your new book, and talking about your affair with Harrison Ford. At the end of the interview, we could hear your dog Gary licking your hand. When I heard you’d been hospitalized I thought about you and Gary.

I’m glad you outed your affair with Harrison Ford. In fact: thank god you told us. Now when I watch the movies and you two are on screen I feel like I’m in on the secret. We’re all in on the secret. You told us about it all in The Princess Diarist. It was very scandalous, but you laughed about it, which was nice. 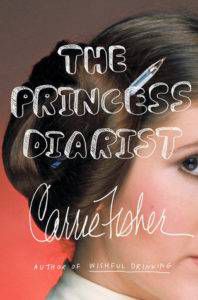 When you died, like so many people, I posted pictures on social media as a tribute. The picture I posted was of you and Harrison Ford. You were wearing a fighter pilot costume, and your hair was braided in a crown at the back of your head. You were holding Harrison around the waist, while he was gripping your arms. You both had huge smiles on your faces.

I’d never read Postcards From the Edge, or watched the movie with Meryl Streep, but after you died I watched everything you’d been in, and read everything you’d written. Postcards From the Edge (the movie) was so wonderful. The relationship between Meryl Streep (you) and Shirley MacLaine (your mother, Debbie Reynolds) was so complicated, and sincere. 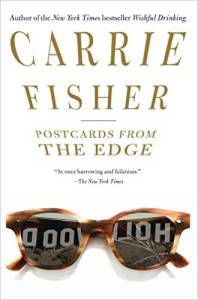 Growing up in a Hollywood family must have sometimes felt like living in the Truman Show. Everyone’s watching.

“Sometimes you can only find Heaven by slowly backing away from Hell.”

I know how hard Bipolar Disorder is, but you had such a wonderful sense of humor about it. I loved Wishful Drinking. I loved your openness, and your ability to laugh off times of your life that must have been really shitty and hard. Mental illness is very lonely. Thank you for over sharing. Thank you for being honest. 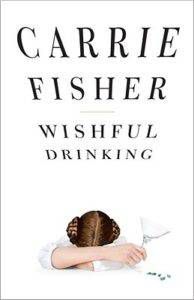 I listen to your books. I don’t know what it would be like to read them, because your performance seems so important to the story. Everyone should listen to the audio version of your books.

Something that always bothered me: why did Luke have to be the ONE with the Force … I loved Luke, but can you imagine Leia with a Lightsaber? With all these powerful men getting accused of sexual assault and harassment, it’s nice to imagine Leia with the Lightsaber. Some guy grabs Leia’s ass, and loses a hand, or maybe she inherited that stranglehold thing her dad could do. Some dude starts mansplaining and she uses the Force to let him know what’s up.

Princess Leia was pretty badass, but Carrie Fisher was a fucking hero.

Happy Birthday Carrie, we miss you!