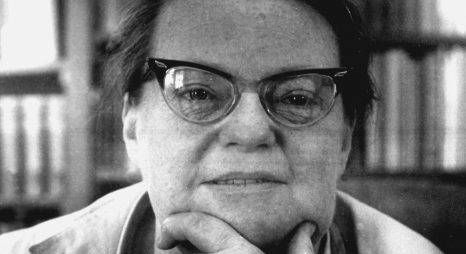 100 years ago today, Shirley Jackson was born in Burlingame, California. She lived a bit more than 48 years, and in that time wrote (arguably) the greatest fiction of her time. Now best remembered as the writer of “The Lottery,” and only slightly less well remembered as the author of The Haunting of Hill House, her work was rich and varied, ranging from proto-Erma Bombeck family tales to works of sheer terror.

In her lifetime, six novels, two fictionalized memoirs, one nonfiction book, one picture book, a one act play, and one story collection were published; posthumously, her family published many additional collections, including the unfinished novel she was working on at the time of her death; there have been two biographies written about her and countless essays devoted to her and her work; We Have Always Lived In The Castle was adapted (horribly) for the stage; The Haunting of Hill House has been two movies, one great and one awful; and “The Lottery” was adapted twice as largely forgotten TV movies.

Shirley Jackson is my favorite author of all time, and it is difficult to write a fitting tribute.

I considered compiling a list of her best sentences, although the scope of that work is quite intimidating and a complete list would be nearly impossible; I considered comparing and contrasting the two biographies that have been published, which are quite disparate in tone (her first biographer, Judy Oppenheimer, writes in Private Demons with apparent disdain for Shirley, while her new biographer, Ruth Franklin, writes with love and joy in Shirley Jackson: A Rather Haunted Life); I considered writing about how “The Lottery” is her worst story, though that wouldn’t be fair because “The Lottery” is a wonderful story and surely she wrote something that’s worse–but when compared to the breadth of her work, “The Lottery” is objectively not the best; I thought perhaps I would talk about how influential Shirley’s writing has been on my own, but that felt altogether too self-serving, and I want this to be about Shirley, not me. So I opened it up to other Book Riot contributors, and compiled our tributes to Shirley.

Shirley Jackson’s writing (specifically a grade school reading of The Lottery) was really the first time I understood the danger of the world in which I live.  This seems like a dark discovery for a child, but it opened up to me all of the possibilities inherent in books.  In that moment, I realized that knowledge of people outside of myself was something I craved and could so easily obtain.  It was also the first time I remember being completely surprised by an author and it taught me that there is so much available to me between the covers of a book.

I’ve always been kind of farm and twisty, even as a kid. I loved weird sci-fi and fantasy and was immediately outcast from most of my social group because of it. I delighted in finding Shirley Jackson because she hits ALL the right spots. Naturally, I use her whenever I can in teaching my own college students. The first time I did do, I used The Lottery and made it a class reading exercise. They just griped at first and then got into the story. At the end, it was quiet and then one young woman just said, “what the hell was that? I have so many things to say about this and I don’t know where to start!” Mission accomplished.

We read “The Lottery” twice in middle school, and I read it again in college. Despite the minimalist style, the matter-of-fact attitude towards stoning a person to death, adult or child, you had to admit it did the job. It scared the bejeebers out of the editor who published it, and enthralled the public imagination. Jackson also made a living off her writing. She used her family as a subject for two novels, accurately capturing children’s behavior, and discussed mental illness.

Like many other Book Rioters, I first encountered Shirley Jackson through “The Lottery.” Sometime around 8th grade, I found my mom’s old, crumbling Norton Anthology of English Literature, and I would immerse myself in its contents, discovering works by authors I had never even heard of. Now, a couple decades later, only two have stuck with me: Vladimir Nabokov’s “Signs and Symbols” and, of course, Shirley Jackson’s “The Lottery,” which fucked with my whitebread suburban teenage brain in a way it had not been fucked before. I was genuinely disturbed by the story, and could not get it out of my mind. Now, years later, I appreciate Jackson’s other works more—I am particularly fond of We Have Always Lived in the Castle—but “The Lottery” affected me in a visceral way few literary works could ever hope.

Reading Shirley Jackson taught me to write. Of course, that is not true in the strictest sense (in fact, I was writing before I could read), but it was in reading Shirley’s stories that I understood what voice is and learned to develop my own. When my writing gets stuck, I turn to Shirley and just read. I wish that she had lived longer, and of course that is largely selfish because it would mean more stories–but I can’t help wondering, too, what she might have done with her life once her children were grown. I think it is fitting (if a little sad) that “The Lottery,” which she was best known for in her lifetime, is the most enduring of her work.