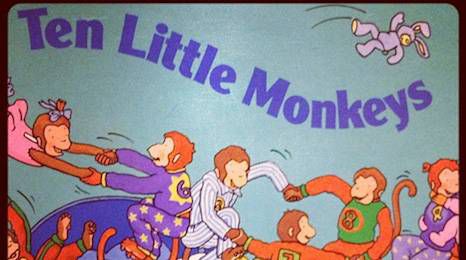 There’s a picture book my three year old son loves, it’s called Ten Little Monkeys. On the surface, it’s a cute, repetitive story about ten naughty monkeys that decide to jump on a bed instead of going to sleep as per their mother’s wishes.

I think I’d be perfectly fine with this book if my son didn’t demand it be read to him every night.

I’ve read this book so many times I have it permanently stamped into the core of my brain like some sort of Clockwork Orange-esque conditioning experiment. I get the rhyme stuck in my head for days, it invades my dreams and I find myself trying to find a deeper meaning to it.

As a result of what very well may be sleep-deprived psychosis (see three year old above) I’ve begun to think of the characters’ backstories and motivations. This helps me cope with reading the same lines over and over again, night after night.

I want to first talk about the father because he doesn’t exist within the story. He’s either at work, stuck in a cubicle at some soulless job that he hates and will never fulfil him as a monkey or he’s a deadbeat and has abandoned the family altogether. Either way, there’s no mention of him whatsoever.

Then we have the mother, she’s doing her best to keep her family afloat. She might work two jobs, she might be a stay at home mom, whatever her situation is, she has the thankless task of keeping her house running while taking care of ten children. She is frayed and on edge, she hasn’t had a night off in what seems like years.

We, the reader, are introduced to her during a particularly challenging evening. Her ten children are refusing to go to bed, they are unruly, loud and a danger to themselves.

What does the mother do to try and stop them from jumping off the bed and bumping their heads? She calls a doctor and asks for advice.

First of all, calling a hospital and speaking directly to a doctor is impossible. It’s never happened in the history of hospitals. You would have better luck calling your local movie theatre and having Steven Spielberg answer the phone.

Secondly, the mother phones the hospital ten times to ask for help with her children. Ten times!  I’m guessing that by call three the response is going to be something like “I’m sorry but this is a hospital ma’am, please stop calling here about your monkeys. No, I don’t care if they’re destroying your new duvet. I’m hanging up now ma’am.”

By call number seven I’ve got to assume that the hospital has alerted animal control to the situation: somewhere out there on fringes of town a woman has ten monkeys in her home and they are out of control.

I picture the mother standing on her front lawn in a soiled bathrobe and curlers the next morning, yelling at the animal control officers as they arrive. The hardened veteran calms her down, wraps a blanket over her shoulders and gives her a steaming cup of coffee while the other officers enter the house, their nets ready.

And that’s about as far as I get in the dream scenario. It’s a very short book and by the end of it I’m usually trying desperately to entice my son to try a different one.

Am I like the mother in this tale, have I lost my mind?

I can’t be the only one who’s created back stories to repetitive, sometimes boring children’s books. I’d be very interested in hearing from anyone else’s attempt to create a deeper back story to a picture book!