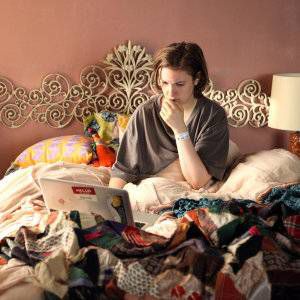 I know, I know, I know, I KNOW I just WROTE about Girls for Book Riot, like, yesterday (okay, not yesterday-yesterday, but relatively recently). And I really don’t want to ape a certain website I know and love to pieces but that nevertheless really needs to quit publishing up to three pieces a day about a show that gets less than a million viewers. But the HBO show, which started out being about the character of Hannah Horvath (played by the show’s auteur Lena Dunham) and her relationships with the other three principle girls of the series, has become increasingly about Hannah’s burgeoning career as a young Brooklyn writer, a career which I am finding less and less and less plausible.

(Spoilers, spoilers, major plot points from first three seasons discussed below, if you’re not caught up and don’t want to be spoiled, go read something else, there are so many things to read!)

I believed Hannah’s one-step-forward-two-steps-backwards-not-enough-of-a-literary-career-to-actually-call-it-a-career for the first two seasons. She starts off as a two-years-out-of-college intern for a small literary press who can’t parlay her internship into an assistantship. She works shitty jobs all season and at one point attends a reading for a former college frenemy blessed with a big roll-out for her memoir. At said reading, Hannah reconnects with a favorite writing professor who encourages her to come read at a literary salon he runs, and she’s going to bring one of her personal essays, but gets cold feet when a mansplaining male friend makes her feel she hasn’t chosen an important enough subject to write about, so she brings half-written bullshit she scribbled on the subway and humiliates herself. I believe all this a thousand percent.

Season 2 is where the show starts to remove itself from reality. Hannah, whom we know to have no professional writing experience, is paid $200 to write a confessional piece about her first time doing cocaine for Jazzhate, a website that seems to be part-Vice-Magazine, part XOJane. NO ONE gets paid $200 for a five-hundred word internet piece about doing a drug everyone is already very familiar with/probably half-did once in college, that’s not a thing that happens. Maybe if you’re kind of somebody, MAYBE if you’re a former Disney Channel star or a politician’s child, but definitely not if you’re super-nobody.

We hear nothing about Hannah’s writing until a few episodes later when she is offered an ebook deal for her essays by an editor who seems much more interested in her lack of shame than her ability to put sentences together. This one’s tricky, because on the one hand, I think we’re missing a WHOLE bunch of steps to get to this place, like Hannah busting her butt to write for a bunch of other websites, networking like a girl possessed, making other author friends, querying a thousand literary agents and being rejected by 999 of them. On the other hand, I liked how this ended up playing out. Hannah is dealing with a bad bout of OCD and procrastinates on her deadline until she has one day before the book is due with only one sentence written. She gets an opportunity, she is in no way capable of delivering on her promise, she ends up completely screwed. This I believe from a girl whose (seemingly) only prior writing experience consists of college classes and the aforementioned piece-about-doing-drugs-shouldn’t-sound-boring-but-nevertheless-I-feel-fatigued-just-thinking-about-having-to-read-about-a-privileged-white-kid’s-first-time-doing-a-real-drug.

Season 3 is where everything just stops being plausible. The ebook is happening, then her editor dies (well, I believe that, people DO die), then at his funeral Hannah finds out that all of his projects are being cancelled (Really? ALL of them? This does not seem like something a house that has put a lot of time and money into books would do), then Hannah gets a referral to another publishing house from her editor’s widow at the wake (Really? That’s what you do when the grabby nobody asks for a handout on the worst day of your life? You just give it to her?), and that publishing house loves Hannah’s essays and wants to publish them as a paper book (Really? She technically still only has the drug essay to her published name…), but her contract with the former house stipulates that they own her work for three years whether or not they choose to publish (Really? She didn’t read her contract? Also, she’s been through two publishing houses now and she still doesn’t have a lit agent?), and then she gets a job doing advertorial work for GQ off of that drug essay (I REALLY want to read this essay, it better be the To Kill a Mockingbird of confessional blog posts) and we know she is good at this job because everyone in the office tells her so but then she realizes she’s not going to have that much time to write with her well-paying office job (But she wasn’t even writing before when she had her job at the coffee shop! When does this girl write? How did she finish a book? Also, I’ve never even seen her READ a book on this show, but the character name drops Michiko Kakutan like it’s no thing? I’m so confused…) and so she quits her cush job and then she unquits and I just have to stop synopsizing before my brain explodes.

I swear to God, I’ve never heard of someone messing everything up on such a regular basis and continuing to receive opportunity after opportunity after opportunity while putting in seemingly little to no effort and being objectively unpleasant throughout the entire process. Well, maybe James Frey, but we all know Frey is just another face of Satan. Writers’ careers take different paths, some people peak early, others later, there are a host of video game obstacles to jump over and smash through, there are a lot of different ways a career can go. I just don’t believe a career goes like this.

Dunham is one of the great Cinderella stories of recent entertainment history. Her college and post-college microbudget films led straight to a critical darling television series and a whoa-how-many-zeroes book deal. Of course, Dunham and company have worked their asses off. You have to in order to be able to accomplish that much. It seems, though, that Dunham and her team can’t (or don’t want to) imagine a world where opportunities don’t fall into her alter ego’s lap, where talent isn’t always enough, where hard work (or, in the character’s case, more like light to moderate work) isn’t always enough, a world where there are hundreds more steps on the staircase and rungs on the ladder, a world outside the wunderkind bubble, a world most people live in.

A source that works on the show spoiled the ending of this season for me. In the final episode, Hannah receives YET ANOTHER literary opportunity, a HUGE one, a classic and well-known ambition of the young and the literate. And I believe this turn of events least of all. It’s no fun watching a character receive all the opportunities in the world and earn none of them. At least it’s no fun to watch for me.

Anyone else watching the series? How do you feel about the trajectory of Hannah’s career?