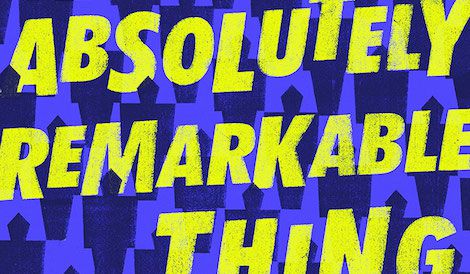 As a recent transplant to New York and unabashed fan of Hank and John Green of the Vlogbrothers YouTube channel, I was thrilled to attend the Manhattan launch event for Hank’s debut novel, An Absolutely Remarkable Thing. The book follows April, a 23-year-old living in the city who gains viral fame for starring in a video that captures an early sighting of the Carls—giant robot statues that appeared simultaneously in cities around the world.

I arrived half hour early that Tuesday night and noticed many people around me were already reading the book. Instead of diving in, though, I pulled out my phone to read the Goodreads reviews of the last book I finished, because, you know, I’m an internet-crazed millennial, and I don’t know how to not care what other people think about the things I like. The top five reviewers thought it was mediocre at best and insulting at worst. Whoops—was I wrong to like it?

I couldn’t help but hate myself for doing that, because it colored my view of the book before I could pinpoint my opinion about it. But what did I expect for breaking the cardinal rule of the internet: don’t read the comments?

I closed the app, but before I could crack open An Absolutely Remarkable Thing, a disembodied voice interrupted the pre-show playlist to invite audience members to ask each other what their favorite bridge is.

It just so happens that I have a favorite bridge, and since it is in the middle of rural Iowa and wildly under-appreciated, I turned to my seat neighbor and followed the prompt.

“I guess it would be this one in Japan,” she said. “It wasn’t too far from where I went to college.”

She introduced herself as Deanne. I told her about the High Trestle Trail Bridge in Madrid, Iowa, which runs on an old railroad track. The center is wrapped in spiraling square steel frames that glow blue at night. I showed Deanne a picture, and she agreed it looked like a transcendent, liminal space, a fall down Alice’s rabbit hole. We went on to chat about our respective experiences in college and abroad, and our relationship to Nerdfighteria, the Vlogbrothers’ fan community.

Then the lights dimmed, and I was anonymous once again, staring at the face of a man I knew from a rectangle of pixels on the internet.

What followed was what I think of as Hank Green and the Evening of Sustained Focus. He read from the book, played some songs, and answered audience questions with John, and I only looked at my phone three times to share moments of the night on my Instagram story (I mean, John Green walked out in a bee mascot costume to give a lecture on robotics, how could I not document that?). 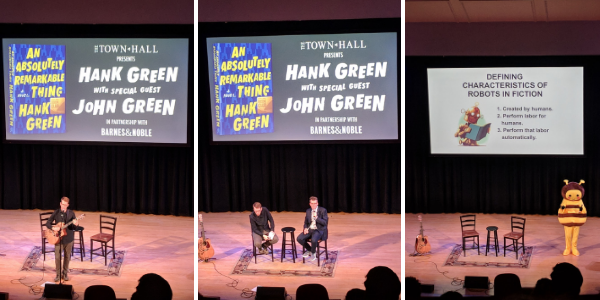 At one point, Hank and John began debating what year the song “Stacy’s Mom” was released. Of course, the collective response to ending such a debate is to look it up on the internet, and when Hank (and half the audience) went to do so, John leapt out of his seat.

“We’re not designed to be able to know that in 10 seconds! Let’s just not know!” he said and turned to the audience: “Stop Googling!”

Hank ended with a rousing speech about the complicated nature of the internet. He emphasized that it is a place, quite like our physical communities, and that we need to be good citizens of both. While it may feel like our words and actions online vanish when buried at the bottom of a timeline, they come with real-world consequences. And when the barrier to creation is nonexistent, we constantly indulge the impulse to respond to everything.

“Maybe sometimes we engage when we should just be thinking,” he submitted.

My impulse was to engage—to post my photos from the evening on Instagram, to see how many people had viewed my story, to go read the early Goodreads reviews of An Absolutely Remarkable Thing (even though I knew I’d hate myself for it later), to read it quickly so I could formulate an opinion on it so I could write my own. And suddenly I resented that impulse.

So a little bit of mindfulness never hurt anybody, I thought.

I fought the urge. I logged out of Instagram and uninstalled Twitter. I’d tried to quit Facebook on my phone before by uninstalling the app, but I’d opened it up in a browser later that same day, so I figured sheer willpower was the only thing that could help me there. My plan was to unplug for as long as it took me to read An Absolutely Remarkable Thing. I wanted to quell the insatiable craving to just check real quick while I eat breakfast and while I wait for the train and before I go to bed and—

Deanne and I walked to the 42nd Street subway station together and exchanged numbers, promising to text when we’d each finished the book so we could discuss it.

Two days later, I watched the Ford and Kavanaugh hearings live with my coworkers, and the benefit of being offline for it was that I didn’t have to relive the vomit-fest by way of everyone’s righteous, angry engagement with it on Facebook and Twitter. I only had to experience it once, in real time. If I wanted to talk about it, I had to reach out to a specific friend to do so—no shouting into the online void.

I’m normally a fast reader, but that was a particularly busy week, so when Deanne texted me on Saturday to ask if I’d finished, I was only 100 pages in. I wanted to hole up and read, but then my roommate suggested we go look for a coffee shop to work in. Even though we’d been living in our apartment for two months, neither of us knew the area well, so I jumped on the excuse to go exploring. We ended up walking for two hours in a zig-zag that landed us half a dozen subway stops from home, but we met a friendly neighborhood cat along the way and did eventually stop for coffee. That evening, she introduced me to this web series, The Platoon of Power Squadron, because a friend of ours had seen two of the show’s creators at Hank and John’s Chicago tour stop. 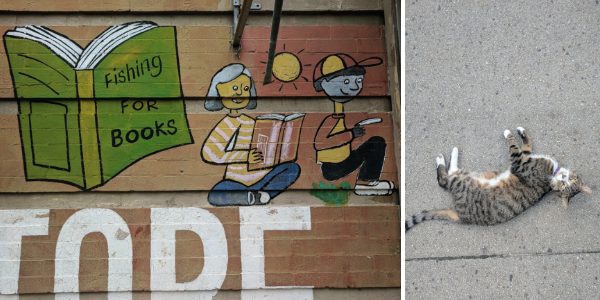 I finally finished the book the following Monday. And while I wanted to just sit with it for a while, I also wanted to check my socials. Of course, I hadn’t missed anything. When I logged back into my accounts, Facebook, Instagram, and Twitter showed me what I’d missed. Guess the algorithm’s looking out for me, like that friend who catches you up on all the hot goss you missed while you were away.

I texted Deanne, and we talked about how nuanced the book’s portrayal of social media and internet fame was. An Absolutely Remarkable Thing is about branding vs. identity, the dangers of polarizing opinions, and the power of online communities to accomplish things that can help or harm. While I recognized many of the themes from things Hank has discussed in YouTube videos and podcasts, I liked that he used a speculative fiction narrative to explore them. (It also didn’t hurt that April and I are in the same stage of life.) April narrates her story of viral fame from the future, so she can reflect critically on the choices she made. At one point she admits, “I like it that people think my opinion matters. It’s just…I don’t know if it does.”

This is something I’m trying to keep in mind now whenever I share my thoughts on the internet, which I acknowledge are just that: my thoughts. My platform is tiny in comparison to April’s, but I think it’s good to stay humble when projecting your voice into your internet community regardless of its size. Mine is one contribution to a conversation, and if I can’t be bothered to engage thoughtfully, then I shouldn’t pop my head in at all.

An Absolutely Remarkable Thing was the 122nd book I read this year, but it inspired me to slow down and give each book a little more thought. Sometimes in my hunger to keep up with the publishing Joneses, I forget the old joy of taking it slow, of sitting with the richness of a story for a while and discussing it with a friend if I can before I slap a review on it and move on.

So I’ll pretend not to care too much what my Goodreads friends and strangers think of An Absolutely Remarkable Thing, because the story swept me up and made me consider the world through a new lens, and if that’s not what books are for then I’m doing something wrong. (LOL so screw your hot take, random reviewer on the internet.)

Deanne and I got drinks last week. We talked about books and podcasts, but also about life in New York, our jobs, our roommates. We’re getting together again next week to try a new-to-me Indian restaurant in my neighborhood.

There’s a time to make stuff and engage, and there’s a time to step back and just think about the stuff other people have made—to give things the sustained focus they deserve before inquiring what others think of them, and to be able to take more away from them because of this. To not overlook all these absolutely remarkable things that might be happening all around us.