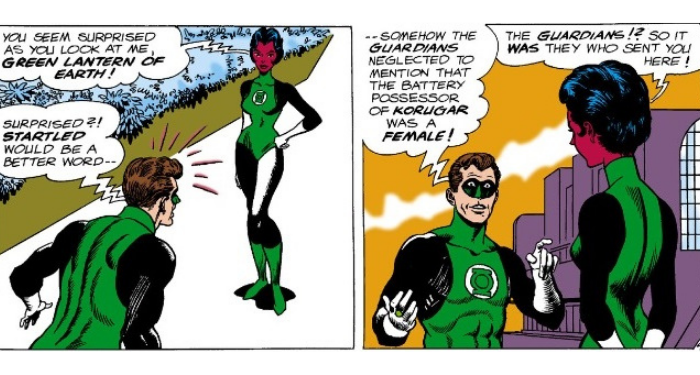 Most people know Hal Jordan as Green Lantern, one of DC’s most famous heroes and a bastion of bravery and willpower. A few, myself included, know him as a bland creep who starred in an adaptation so weak that Deadpool had to put him(self) out of his misery. Whatever your opinion of the guy, you can add “homewrecker” to his list of accomplishments.

While it’s certainly nice that the Guardians of Oa, who are in charge of doling out the Lantern rings, are egalitarian enough to believe that women are just as capable of heroism as men, their open-mindedness has…limits.

We start with the Guardians summoning Hal and giving him a new assignment: to convince the Green Lantern of Korugar to rescind her resignation and stay with the Corps. They conveniently get through this conversation without using a single pronoun, so Hal is shocked — SHOCKED — to discover that a woman person could possibly be a hero.

So why does Katma Tui want out of the Corps? Somehow, it’s not because her fellow GLs are dunces. No, she’s fallen in love with a scientist, Imi Kann, who helped her defeat a giant amoeba. She even builds an “emotion-meter” to help her figure out if she loves Kann more than crime-fighting. Survey says yes, so she’s quitting the Corps, even though Kann is 1000% better than Hal and would be totally cool with having a Green Lantern for a wife.

Clearly, the idea that Katma Tui could be a married woman AND a crime-fighter was too fantastic for a comic book about space cops with magic jewelry.

Rather than respecting Katma Tui’s wishes, Hal heads off to scheme some more about how he can keep her in the Corps. Said schemes are interrupted by the return of the giant amoeba.

Because Katma Tui’s first instinct was to save Green Lantern rather than Imi Kann, Hal figures that she secretly loves heroing more than romance. To prove it, he builds another emotion-meter and has her test herself again. This time, the results unequivocally point to the “butt-kicking” side of the scale. In tears, Katma Tui agrees to break off her engagement and stay with the Corps.

If you know anything about Hal, you are probably wondering by now about his own romantic life. He has spent most of his existence trying to win the affections of his boss, Carol Ferris. Assuming he ever succeeds, will he, too, have to decide between love and crime-fighting?

Of course not. He’s a man, so he’s special. This isn’t me speculating: Hal comes right out and says it.

Oh, and he deliberately created a fake amoeba to force Katma Tui into dumping Imi Kann. It’s a shame this is Kann’s only appearance. I’d like him to come back and slap Hal and the Guardians with the power of SCIENCE.

This story has aged as well as a soft-boiled egg. Its very premise is based on the antiquated and utterly fictional notion that married women and mothers can’t work outside the home. In reality, working wives weren’t all that unusual, even in the ’60s: according to the U.S. Bureau of Labor Statistics, 44% of married couples in 1967 both had jobs. Compare this to 36% of couples where only the husband worked. Some women may have worked out of necessity, but many probably enjoyed the independence and sense of accomplishment just as much as the extra money.

Some comics recognized this fact. After marrying the Flash, Iris West-Allen kept working as a reporter. The fact that she seems to have no hobbies and happily spends her days off cooking elaborate dinners for her husband is irritating, but at least she gets to keep her job. Poor Katma Tui never got that chance. And when she did choose one over the other, the men in her life forced her to change her mind for their own convenience.

I’d like to tell you that things got better for Katma Tui, but they, uh, really didn’t. Sorry to go all Gloomy Gus on you, but comics are like that sometimes. If you want something funny, maybe check out this article on that perennial bundle of joy, Squirrel Girl.