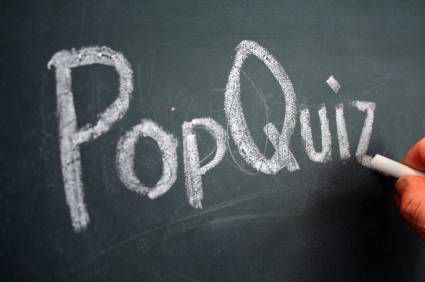 If I were to have you guess novels based on their first lines, chances are you probably would do pretty well. For classic books, the first line becomes a sort of icon for the book, in many ways as recognizable and memorable as the plot and characters.

But how well do you know the second lines of those greats? Time for a little quiz. Guess the novel based on its second sentence (the answers are in inviso-text: just highlight the text next to the ANSWER field for each to see the correct title.) *EDITOR’S NOTE: answers are also available at the bottom of the post.

1. In the bed of the river there were pebbles and boulders, dry and white in the sun, and the water was clearly and swiftly moving and blue in the channels.

ANSWER: A Farewell to Arms by Ernest Hemingway

2. They were coming toward where the flag was and I went along the fence.

3. To her son these words conveyed an extraordinary joy, as if it were settled, the expedition were bound to take place, and the wonder to which he had looked forward, for years and years it seemed, was, after a night’s darkness and a day’s sail, within touch.

ANSWER: To the Lighthouse by Virginia Woolf

4. “Whenever you feel like criticizing anyone, ” he told me, “just remember that all the people in this world haven’t had the advantages that you’ve had.”

5. However little known the feelings or views of such a man may be on his first entering a neighbourhood, this truth is so well fixed in the minds of surrounding families, that he is considered as the right property of some one or the other of their daughters.

6. He had safely avoided meeting the landlady on the stairs.

7. No, I am not a spook like those who haunted Edgar Allan Poe; nor am I one of your Hollywood movie-ectoplasms.

ANSWER: A Tale of Two Cities by Charles Dickens

11. Some years ago – never mind how long precisely – having little or no money in my purse, and nothing particular to interest me on shore, I thought I would sail about a little and see the watery part of the world.

12. In the first place, that stuff bores me, and in the second place, my parents would have about two hemorrhages apiece if I told anything pretty personal about them.

ANSWER: The Catcher in the Rye by J.D. Salinger

1. A Farewell to Arms

2. The Sound and the Fury