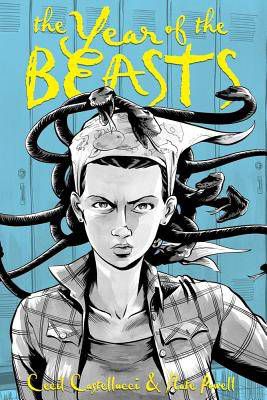 My favorite characters are often secondary. As much as I may love the protagonist of any book, I’m always wondering what the plot might have looked like from another angle, a different perspective. Luckily for me, enough writers apparently feel the same that there’s no shortage of books offering multiple points of view. While it’s possible to take this too far (cough GRRM cough cough), the masters of the form (Quentin Tarantino, Guy Ritchie, A.S. Byatt, China Mieville, and Lev Grossman are at the top of my personal list) can take disparate voices and turn them into a chorus.

Filmmakers and novelists don’t have a monopoly on parallel storytelling — there were so many great examples of this technique in children’s books (including Mieville’s Railsea, which we met back in our examination of the Fourth Wall) that it was almost painful trying to narrow it down. But I persevered for you, o readers!, and my search for the Platonic example in each age group yielded the following three standouts. It’s Useful to Have a Duck, Isol and Elisa Amado
Ostensible Age Range: 4 – 8

This is my absolute number one favorite board book to give at baby showers, and also one of the two books in the bookstore that I will start reading aloud at the slightest provocation (the other is Socksquatch, about which more at a later date). When you’re a little boy, a duck is incredibly useful! You can use it to play so many games. And it turns out (as you learn when you flip the book over) that having a little boy is incredibly useful for a duck! You can play so many (other) games. Because you’re never too young (or too old) to be reminded that the game you’re playing with someone isn’t always the same game that someone is playing with you. You might already know Selznick for his book The Invention of Hugo Cabret (inspiration for the movie Hugo); Wonderstruck is his newest. While the prose portions of the novel follow Ben, a young boy in 1977 trying to find out about his unknown father after his mother’s death, the images follow Rose, a deaf girl in 1927 — only to eventually bring them together, courtesy of the American Museum of Natural History in New York. Selznick’s style is simple and clear, both in the writing and illustration, letting the structure and the story itself do the work. Wonderstruck is not only an argument for the power of parallel storylines, it’s also a shining example of the different ways that images and prose can work in tandem without actually being combined. Reading Year of the Beasts is something like looking at an optical illusion, one of those black and white figures that shifts back and forth depending on where you focus your eyes. Is it a lady in a hat or a dude with a mustache? While Castellucci is telling us the straightforward, real-world story of the summer that teenager Tessa’s world fell apart, Powell seems to be inhabiting a different universe, one populated by (still teenaged) mythological creatures portrayed in classic comics style. When and how are they going to match up? Fair warning: when the “Ah hah!” moment came, it pretty much broke my heart.