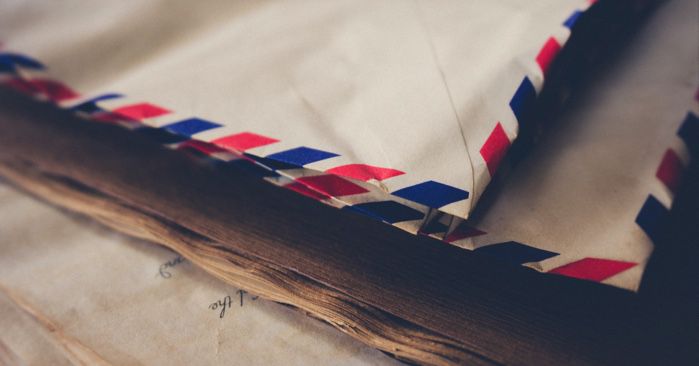 Griffin Moss and Sabine Strohem have been with me for nearly my entire life. My mother received the Griffin & Sabine trilogy by Nick Bantock as a gift in the early 1990s. She wasn’t a big reader, but I was, and when I came across them decorating our guest room, I decided that they must be for me. They were, after all, formatted like my beloved copy of The Jolly Postman, so why shouldn’t I read them? The illustrations were beautiful, if slightly unnerving. This was shortly after we moved to New Jersey when I was in 2nd grade, so I would have been around 7 years old.

In the tradition of many precocious readers, I approached these books by skipping over the words and concepts I didn’t understand. I did not know words like “tangible” or why “the wineglass has more impact than the cup.” I got the gist of what was happening. I knew that Sabine had been able to see Griffin’s artwork in her mind’s eye for years and that they fell in love through their (beautiful, disturbing) postcards and letters but that they were somehow in different, parallel worlds. They could be geographically right next to each other but never see or touch each other. Would they ever find a way to be together? That’s also probably as much of an explanation as I could give you as a 31-year-old.

I remember thinking that there was a chance the events in the books were actually happening and that I was reading real correspondence. The letters seemed handwritten. The envelopes were there. The typed letters even had typos. I remember finishing the first book, which ends by telling the reader that “Griffin Moss is missing.” I somewhat worriedly told my mother the news. Mr. Postman was a cartoon, I knew, but these seemed to be real people. I had their letters as proof of their existence.

I didn’t realize that a million other people did too.

The History of Griffin & Sabine

Griffin & Sabine was a publishing phenomenon in the 1990s. It goes without saying that this is unusual for a debut picture book marketed to adults. It sold 200,000 copies in its first year, mostly thanks to handselling by independent booksellers. Subsequent books were also bestsellers. There was eventually a staged version and also, in a very ’90s move, a CD-ROM production called Ceremony of Innocence. Before writing Griffin and Sabine, Nick Bantock worked on some well-known but now somewhat-hard-to-find-at-reasonable-prices pop-up children’s titles including Jabberwocky and The Walrus and the Carpenter.

There was much accompanying swag, of course. When I was in college, somehow under the impression I was going to be sending a lot of letters in a world that already had email and texting, I spent $20 on a secondhand Griffin and Sabine address book. I still use it, mostly to look up my sister’s address several times per year. There was also a stationery kit that you can still pick up for $85.00 on Etsy. You can purchase some of the original postcards from the author himself on the same site.

The series was optioned for film in 2013. In 2015 there was a Kickstarter for enhanced apps that did not meet its goal but still raised a little more than half of the money required, proving that there is still interest in these books over a quarter century later. I feel like this project would most likely tank as a movie but could be a beautiful visual novel app. The final book in the series, The Pharos Gate, was released in 2016. It is a collection of the “lost” correspondence of Griffin and Sabine. It provided me with little clarity on what physically happened to them and I was grateful for that.

What Happens When Your 7-Year-Old Reads It

One of the first things that comes up when you google Griffin and Sabine is “Griffin and Sabine age appropriate” because I am clearly not the only child to be drawn to these books on a parent’s shelf (or, as it was, on top of a dresser in a room I rarely entered). I believe that they gave me a lifelong fascination with things that I didn’t quite understand. Esoteric, a little vague and abstract, they made me comfortable with uncertainty once I figured out that it wasn’t my personal mission to find Griffin and that he was just fine in the next book. Things weren’t necessarily what they seemed from one book to the next. Did one of the lovers invent the other out of loneliness? What if they never found each other? Why couldn’t they just call each other on the phone? (That last question is never really addressed. It might be the string that unravels the whole thing.)

Through the illustrations in these books, I came across things that I would find the meaning of only later in life. Some of the titles of the postcards reference other works of art, W.B. Yeats in particular, and years later I was shocked when I found the origin of the phrase “And what rough beast […] slouches […] to be born” (in the books, it accompanies a photo of a newborn baby and I thought about it for years). The phrase “you cannot dismiss a muse at whim” still comes to me at odd moments, particularly when I am trying to convince myself that I do not need to be writing. I did not know what a muse was yet and I wasn’t sure about the word “whim” but I definitely knew that Sabine was pissed at Griffin and, like everything else, that was enough.

During quarantine, I have started to decorate my long-neglected living space. On impulse, I bought a (much more affordable) reproduction of a Nick Bantock collage on canvas for my living room. I like to look at it and remember Griffin and Sabine, my confusing friends from when I was 7.