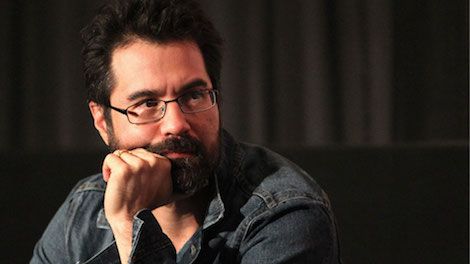 After their hits with Code Monkey Save World and the Princess Who Saved Herself, the dynamic duo of Greg Pak and Jonathan Coulton are back with a sequel: The Princess Who Saved Her Friends with art by Takeshi Miyazawa, colors by Jessica Kholinne, and letters by Simon Bowland. They’re about midway through their Kickstarter for the sequel, ending on October 17th. I had the opportunity to chat with the incredible Greg Pak, comic book writer behind the three titles as well as Planet Hulk, World War Hulk, Batman/Superman, and many others.

Here’s a little taste of the interview:

Elisa Shoenberger: What made you both decide to make it into a book The Princess Who Saved Herself?

Greg Pak: We started off by making a graphic novel called Code Monkey Save World that was a big loopy adventure based on characters from a bunch of Jonathan’s different songs. We did a Kickstarter for that and it went through the roof. At a certain point, we thought, why don’t we just do a whole book? We both had been thinking about this song of Jonathan’s “The Princess Who Saved Herself.” It’s this awesome song about a girl who lives in a castle and eats cake and has a pet snake. She encounters these various antagonists through the course of the song and then she sticks up for herself, but then she opens the circle and makes friends with them. At the end, they form a band.  That’s how it came together. That’s how that one came about. 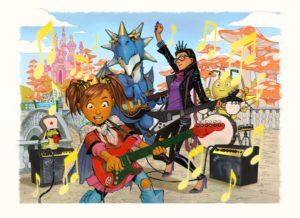 Shoenberger: What made you all decide to do a sequel with the Princess Who Saved her Friends?

Pak: We talked about it from the beginning because we had so much fun on the first one and the Kickstarter was really successful. I’ve taken it to cons. That’s my highest selling book; I sell more copies of the Princess Who Saves Herself than Superman and Hulk. We’ve always wanted to do a sequel. With Jonathan, we never rush into anything. These are all passion projects. We do them when they feel right and then we just go whole hog on them.

But we hadn’t really had an idea that really made sense until earlier this year when I realized: So the first book ended with this kind of great moment where this awesome kid figures out how to open up the circle. But if you just kinda stick with that for a week or so, the cracks will show up, right? Just because you’ve made friends with a mean person doesn’t mean that they just instantly stopped being mean. People don’t change overnight. Also folks sometimes have just different worldviews or different attitudes about certain things. And it’s not even necessarily always a question of what right or wrong.

I’ve always loved children’s books that kind of grappled with real conflicts like that and don’t pretend that there’s really easy answer to that, but actually look at tricky social interactions because that’s a kid’s life. Heck, that’s all of our lives. We all are dealing with these moments when we realize our friends are not quite doing what we wish they would be doing.

Once that sort of theme came together, it just made a lot of sense with the story itself because you’ve got the princess and the wicked queen who were in a band together. In the story at a certain point, the wicked queen is mean to the other people in the band because they’re not that good. The princess has to figure out how to manage that. Things get complicated too because there’s another band, The Royals, and they’re incredibly good, intimidating, kind of awesome, and also jerks. The queen ends up joining their band and then there’s a battle of the bands. The stakes get raised and we’ve got a pretty fun twist ending. The story felt right in the end. This is going to take those themes, but raise them to the next level, complicate them in an a great way that’ll give kids and adult something to grapple with.

Shoenberger: What makes you think that these stories are so critical right now?

Pak: We live in an era in which empathy is underrated or even held in contempt by a certain number of people. Any story that encourages reflection and kindness is a useful thing these days…

There’s a pretty good number of people who buy this book for their sons as well as the daughters. And I love that. I think it’s so important to have boys to read books with girl heroes as well. Any book that lets kids identify with heroes who may look different from the way they look is really important…

Our princess character’s name is Gloria Cheng Epstein Takahara de la Garza Champion. She’s at a multiracial character. It’s mentioned but it’s just part of the world. I really loved that. I’m biracial myself. I just remember when I was growing up becoming aware that every time there was a biracial person in a book or in a movie, that person was usually some kind of symbol of something for other characters. The character was always being used to embody some kind of tragedy or cross-cultural horror or understanding.  That always kind of drove me crazy. Those stories are just using people as symbols.

I love the fact that this is a story which has a multiracial character who’s just living their best life. She’s just doing her thing. I think there’s absolutely room and tremendous validity in stories that grapple in a serious way with the kind of struggle that sometimes the multiracial people may have. But I think there’s also a huge space for stories in which characters are biracial and that’s just part of their backstory, but it’s not used as a tragic focus. It’s just who they are. I think there’s huge value in stories that just normalized people with different backgrounds. There’re some kids who see this story and see themselves reflected in that character. I think that just seeing that affirmation is huge.

There’s potentially good things happening when kids who aren’t multiracial see characters like this who are just normal. It’s normalizing the existence of people who are different from you. The difference is not something to be feared or gawked at. It’s just reality and everyday life and it’s fine. It’s a little thing that I’m happy about.

Thank you to Greg Pak for speaking with me! Check out their Kickstarter at: https://www.kickstarter.com/projects/gregpak/the-princess-who-saved-her-friends

Want more Greg Pak? Check out this Comics Reading Guide and How I Came Back to Superman.