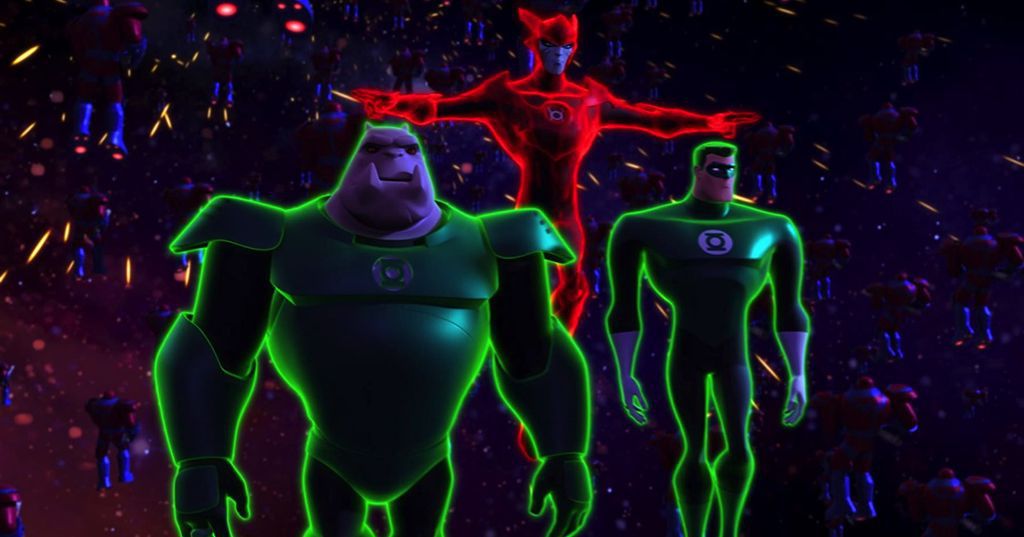 I watch a lot of animated shows. Like comics, “cartoons” get a bad rap as being “kid stuff,” being shallow, and focusing on capes and tights and blowing stuff up (which, even if it was the case, who cares, I like what I like and the world is too serious anyway). What folx who dismiss animation don’t realize, or choose not to see, is that animated shows are entire unlimited universes unto themselves; one can literally go anywhere and be anything within them, and those who dismiss those possibilities are missing out on deep, beautiful, well-built worlds as well as some of entertainment’s best storytelling. I am unashamed to declare I will die on “cartoons are real shows” hill just as I will on “comics and graphic novels are real books” peak.

That said, I didn’t watch Green Lantern: The Animated Series when it first aired in 2012–2013, mostly because I don’t particularly care for Hal Jordan. Dude has an ego the size of Mogo, he’s kind of a dick, and while his buddies in the Corp may have forgiven him for almost wiping out the universe, I’m a little less forgiving. GL: TAS is also from the earlier days of computer animation and while it’s not quite S1–4(ish) of The Clone Wars (which gets a pass—my rules, I can grant passes where I want, Star Wars, shut up) where everyone stands with their hands either awkwardly at their sides  and their arms crossed because the programs got confused when asked to render anything in between that wasn’t a lightsaber or blaster fight, it’s kinda blocky and a little choppy and sorta flat.

One day I was chatting with a friend about how much we wished the new iteration of Voltron had ended after S7 because S8 was a complete dumpster fire but how much we still loved all the creators and voice actors when she said, “Hey, you know Josh (Keaton, who voiced Takashi Shiorgane on Voltron) also did Hal Jordan on the Green Lantern series which was really good.” To which I replied, “Ugh, I hate Hal Jordan.” With which she countered, “You won’t hate this one.”

And I’ll be damned, she’s right.

Green Lantern: TAS is a phenomenal little show that came to a close far, far too quickly (though at least it had a chance to wrap up, unlike so many other sci-fi and fantasy series, regardless of medium). It’s that very special blend of immersive world, stellar writing, voice actors who clearly love their characters, and an animation style that fits the aesthetic (yeah, I was wrong about that, mea culpa). The series uses the medium to expand the property beyond the boundaries set by pervious iterations, and that inexplicable alchemy that brings everything together for big bang–level perfection. The basic premise of the show’s (tragically) single season is: Hal steals a ship and, dragging Kilowog (by far my favorite lantern after Jessica because who doesn’t stan a giant pink space hippo) along for the ride, travels to the edge of the space administered and protected by the Green Lantern Corp to investigate the deaths of several fellow GLs. Upon their arrival, Hal, Kilowog, and Aya, the ship’s AI, discover that their colleagues and friends have been murdered by a group of Red Lanterns led by Atrocitus who wants revenge against the Guardians of Oa (space cop commissioners who sometimes make decisions for other beings they have zero right to make) who destroyed his planet with their Manhunters. During the battle Hal and Kilowog capture a Red Lantern named Razer who turned after the death of his wife but for Reasons decides to help our heroes in their mission to stop Atrocitus. Sort of.

What makes it so compelling? Part of it is that alchemy I mentioned earlier, which as a writer I find frustratingly ineffable because if I could isolate the how that goes with the what, I could apply it and maybe have a little more confidence in my own word spew. There are a few of the more concrete elements I have been able to isolate, however:

Hal Jordan is Not a Rampaging Asshole

I mean, he’s still a little douchy, but it’s the endearing variety of douchy rather than the one that make you want to kick him in the face with a roller skate. Yes, he steals a ship, but it’s for a good cause. Yes, he drags Kilowog along with him, but Kilowog needs a stick-ectomy in this incarnation anyway. This Hal is the first to acknowledge that Aya is more than a program, the first to see beyond Razer’s rage to pain beneath. Animated Hal makes a lot of mistakes, but he admits to them with a minimum of “Well, actually”-ing, and his first instinct is to at least attempt a fix rather than leaving the mess for someone else to clean up. Over the course of the season, he learns to put others first and to let them make their own decisions. To listen before he punches.

Full disclosure: because Josh Keaton also voiced Shiro, one of my all time favorite space boys, I may be a little biased, but I promise you I’m not the only one who makes a Hal Jordan exception for this show.

Those of you who follow me on Twitter (@SWSondheimer) know that I think Zuko’s redemption arc on Avatar: The Last Airbender is the primer on how to do the thing. Any and every writer who is putting a character through that particular exercise should not just study Zuko’s through plot but internalize it to the extent it’s burned into their brain. So understand what I mean when I saw Razer’s redemption arc is very nearly as good. His anger isn’t misplaced: he went to serve his people and while he was gone, his wife was murdered. If he wasn’t angry I would be a problem. The issue isn’t that he feels rage, the issue is the ways in which he expresses that rage.

What’s different and fascinating about Razer’s arc is that he knows he’s chosen the wrong path. He’s always known but he’s too deep to pull himself out of the grave he dug. And just when he’s climbed high enough for Hal and Aya and Kilowog to grab him at the lip of the hole, he slides back down and he has to climb up again. And again. And again. Redemption isn’t easy. It shouldn’t be. Like Zuko’s and like Razer’s, it should be messy and dirty and it hurt. But if it’s really what you want, like both of these characters, you get there in the end.

AI’s in sci-fi are usually tools for the flesh and blood characters. Even when they’re sentient, they provide something the living characters need: comic relief, a personality foil, a reminder of humanity, a friend. Their origins and needs are very rarely considered and though they sometimes sacrifice themselves for another character, the grief only goes so deep and is usually focused on the loss of the still living people rather than the absence of the AI. Aya is different.

Like Hal and Razer, she develops over the course of TAS‘s run, growing from a snarky ship’s system to a fully realized being not because she can transfer into a robotic body but because she has needs and wants. Because she deciphers and then builds a moral compass and allows it to inform her decision making. Because she falls in love. Because someone falls in love with her. Because the universe is a better place for her presence in it.

Convinced yet? I thought so. All 26 episodes of Green Lantern: The Animated Series are available on DC Universe, and you know you’re looking for stuff to watch—especially if, like me, you’re finding yourself awake in a lot of those darkest nights.