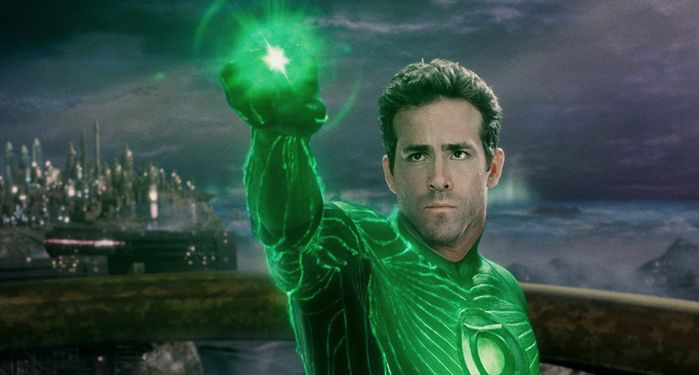 It is a truth universally acknowledged that Green Lantern was a terrible movie. Literally the worst. Even the most diehard DC apologists I’ve talked to won’t utter a positive word about this complete travesty of a film. Ryan Reynolds, who starred as Hal Jordan, went out of his way in his next superhero role, to first mock and then time travel and “assassinate” himself for being involved in it.

But remember, here at Pass/Fail, we’re not judging the product created when a property is adapted, we’re judging the faithfulness of that adaptation to either the spirit or the letter of the comic that spawned it.

Okay, maybe not that last one, but I’d have to think about it really hard.

Anyway. I’m using other resources to jog my memory, so if I’m a little off, apologies and mea culpa. I’m saving my bleach for cleaning my house, I can’t afford to waste it on scrubbing my brain.

The middle child of three boys, Hal idolized his father, a test pilot for Ferris Air. After witnesses his father’s death in a plane crash during an airshow, Hal joined the Air Force with hopes of becoming a pilot, despite having seen his worst fear play out and knowing he might meet the same fate.

Years later, Corps member Abin Sur crashed (lots of crashing) his own ship on Earth and his ring, as Green Lantern rings are wont to do, chose the most worthy person it could find as Sur’s successor. That person, because he had overcome his fear to become a pilot, was Jordan. Trained by Kilowog and Sinestro, Jordan replaced Abin Sur as the protector of sector 2814. When he discovered Sinestro was using his ring to rule his home planet with fear, Jordan reported his fellow Lantern to the Guardians and then faced Sinestro in battle. Jordan was triumphant and Sinestro was expelled and banished to the Antimatter Universe which, as you are no doubt aware, didn’t really take.

Jordan, like many other Lanterns, split his time between his Lantern duties and his home planet where he worked at Ferris Air, flying stuff like his dad and chasing his boss, Carol Ferris (which…I really hope his dad didn’t do because ew, gross).

So…y’all aren’t going to believe this, but as Pass/Fail standards go Green Lantern is a relatively solid pass.

We have a longstanding Corps. We have Abin Sur, Lantern of Sector 2814, crashing on Earth and dying. We have his ring finding test pilot and certified douchecanoe Hal Jordan at Ferris Air. We have a guy smart enough to fly an advanced piece of weaponry doing what a ring tells him to do and being zapped across the galaxy.  Once there, he trains with a giant pink space hippo and a purple elf.

This is where the movie diverges a bit from a literal interpretation, but I am forced, with an excess of eye rolling and muttering, to admit that it keeps to the spirit of Hal’s origin story.

In the comic, Abin Sur’s ring chooses Hal because he’s proven he’s strong enough to overcome his greatest fears, yes? Yes. In the movie Sinestro calls him out for being afraid he can’t make it as a Lantern and rather than proving his superior officer wrong, Jordan takes his ball and goes home (he actually takes his ring and his Lantern battery, but…metaphor). It’s only when Jordan faces that fear, and faces the big bad, that he truly comes into his power as a Green Lantern. So: different framing, same message.

As to that big bad being Parallax; it’s a really good wad they shot there, which could have been used later, but Parallax is an ancient entity who embodied the yellow light of fear so the way it was used in the movie isn’t totally out of line. And, in fact, using it as a way to get Abin Sur to Earth and to nudge Sinestro over to the dark side isn’t, in theory, awful.

So, again, if we allow for both literal interpretation and that of sensibility in the same adaptation, this terrible, horrible, no good, very bad movie is actually a pretty decent comic book adaptation.

I know. I’m so, so sorry. I just threw up a little in my mouth too.

Join us next time for Pass/Fail.  Which will hopefully be a little less painful.