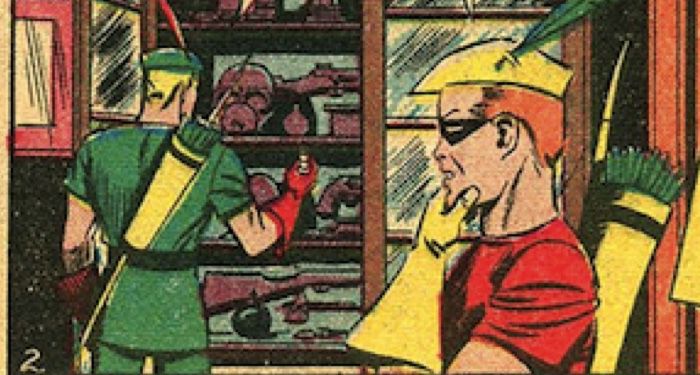 As anyone who stands still long enough for me to tell them knows, I love Green Arrow very very much. Recently I’ve been reading some of his harder-to-find Golden and Silver Age adventures and greatly enjoying them, but there was one story in particular that absolutely flabbergasted me, because it seemed to go against everything Green Arrow stands for. No lie, folks: I felt a little betrayed by my guy.

On the other hand, it is sublimely ridiculous in the best Golden Age way. Let’s take a look!

The story, “Robin Hood’s Revenge,” first ran in More Fun Comics #82 (August 1942), and was drawn by GA creator George Papp. There’s no credited writer, but Comics.org suggests that it might be Don C. Cameron; another possibility is Green Arrow’s other creator, Mort Weisinger, who edited the book. Or Papp could have scripted it himself! Who knows! Whoever it was, they were very confused, though!

The story begins with Green Arrow and his sidekick Speedy (AKA millionaire playboy Oliver Queen and his youthful ward Roy Harper) busting the delightfully named Professor Wurm and confiscating his “time pills.” I’d like us all to take a moment and just appreciate the glorious Golden Age concept of time pills. 1940s mad science has its own special flavor and I love it.

“Have power to dispel the illusion of time and let user enter into the past!” Love a professor who uses exclamation points on his labels. Also, “the illusion of time” is a truly mind-blowing concept that unfortunately this story doesn’t go into at all.

Roy of course immediately pops a time pill because duh, who wouldn’t? And he instantly finds himself, fittingly, in Robin Hood times!

These men are, left to right, the Sheriff of Nottingham and Sir Guy of Gisborne. The former proceeds to order Roy hanged from a tree (Roy complains about being lynched, which isn’t technically inaccurate but also: yikes). Luckily, he’s promptly rescued by Robin Hood himself:

They’re almost overpowered by the Sheriff’s men, but Ollie has figured out where Roy’s disappeared to and takes a time pill himself, arriving just in time to save Robin and Roy. I guess he’s like pretty mad about the wonder of traveling eight centuries into the past and meeting the hero he’s modeled his entire life on, because he’s extremely unsympathetic to Roy’s near-death escape:

YIKES AGAIN. BOTH OF YOU. BIG YIKES.

Robin is so impressed with their archery skills that he invites them to join his Merry Men, but Ollie has reservations. Isn’t Robin Hood, you know…a criminal?

Robin Hood isn’t a thief! The real thief is capitalism! I think it’s pretty clear that Robin is being metaphorical here and Ollie is being extremely literal, which is going to cause problems later, but also, Ollie, if you have ethical qualms about Robin Hood’s whole deal, maybe don’t dress like him every single day of your life. But Ollie’s a millionaire, so of course he cares more about property than systemic oppression. He wouldn’t get woke until the ’70s, and that’s about 790 years away at this point.

Meanwhile Roy’s just casually dropping anti-Irish slurs, fabulous. (It would be established 47 years later that Roy’s father was an Irish immigrant, so maybe it’s okay?) Friar Tuck for sure does not know what a potato is, anyway.

The next morning, Ollie and Roy come across a peasant couple whose son has been killed. Guy of Gisborne pops up out of nowhere and is like “Robin Hood did it” and Ollie’s like “Then we are going to ARREST ROBIN HOOD,” at which point I was like “Damn, you really can’t trust any rich men, huh?”

At least Roy has the proper spirit, which is “WE CAN’T ARREST ROBIN HOOD, WE BASED OUR WHOLE DEAL ON HIM.” Ollie’s like “We’ll make sure he has a fair trial” and Roy, who wasn’t born rich and understands class solidarity, is like “Did you forget that they tried to hang me from a tree with zero trial less than 24 hours ago?” (But as you’ll recall, Ollie thought he deserved it, so, uh…yikes once more, I guess.)

Ollie confronts Robin, who agrees to go peacefully if Ollie can defeat him in shirtless, nipple-less boxing:

That second panel is so endlessly funny to me. I want a tattoo of the whole thing.

Once Robin is handed over to the authorities, though, Ollie starts to wonder if…maybe they can’t trust the Sheriff of Nottingham and Guy of Gisborne, AKA men so villainous their names are remembered for it centuries later? Roy’s like, “Gee, ya think?”

Sure enough, the Merry Men burst in and inform Ollie and Roy that Robin is about to be used for target practice:

Check out Ollie dodging culpability like a pro in that last panel! “You betrayed our Robin to those fiends?” “No, we didn’t.” You literally knocked him out and handed him over to men you know for a fact don’t care about due process! The only way you could be a worse friend is if you were one of the dudes throwing a spear at him at this very minute!

(Also check out Marian’s truly baffling “12th century” ensemble, which looks more like she’s playing Titania in a 1940s production of A Midsummer Night’s Dream. Which I guess makes sense, considering when this comic was published.)

Our heroes easily rescue Robin, and also, turns out he wasn’t guilty of murder in the first place, obviously:

As they’re celebrating their victory, Ollie and Roy suddenly fade out of 12th century England and reappear in their 1940s home. The time pills wore off! But what a grand adventure they had!

Overall, it’s a very silly and extremely Golden Age story, and only the first of several in which Green Arrow and Speedy find themselves implausibly whisked into the past to fight beside famous archers of history. But the idea of Green Arrow meeting Robin Hood and pretty much immediately taking sides against him is just wild to me, especially since this was a comfortable 12 years before the Comics Code Authority would have made it verboten to depict Robin Hood as a virtuous but unrepentant thief, or have superheroes team up with such. Even Superman was still pretty mischievous in 1942, so having Green Arrow betray his hero to corrupt authority so readily feels as anathematic to the character as Batman calling an exterminator about all those bats beneath his house, or Wonder Woman fighting to repeal the 19th Amendment.

And yet, More Fun Comics #82 has three very important lessons to teach us. These lessons are not about history or loyalty, and they are certainly not about 12th century fashion, but they’re still important:

1. Time is only an illusion, and if we could only get on Professor Wurm’s level, we too could travel back in history on a whim!

2. Be a Roy, not an Ollie. (This is the lesson of every Green Arrow comic, actually. Yes, even the one where Roy does heroin.)

3. Eat the rich, with or without roasted potatoes.

Thankfully, Ollie would eventually lose all his money and take that last lesson to heart. In the meantime, bro, pay your taxes, stop trying to be so much like Batman, and maybe look into growing a beard? I promise, it’ll really work for you!