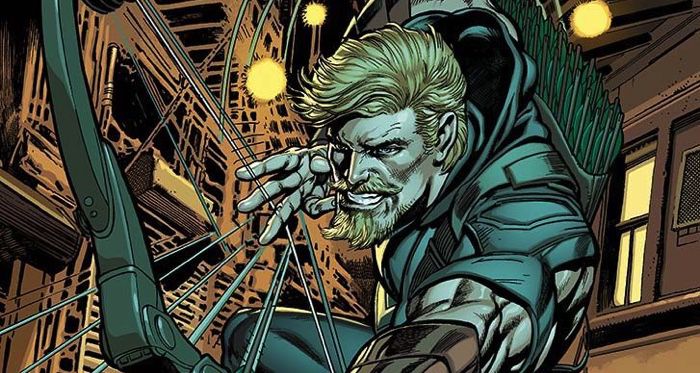 We’ve been celebrating a lot of comic book anniversaries lately, and I’ve been pretty excited for 2021, because it marks the 80th anniversary of Green Arrow. Sure, the ol’ Battling Bowman is typically a C-list DC character, or maybe B-list at best — he’s certainly not as major a hero as some of his fellow newly minted octogenarians, like Wonder Woman and Captain America. But Green Arrow and his extended franchise are my very favorite DC family, and I’ll take any excuse to blather about them.

In fact, as of this writing, DC has just announced a 100-page 80th anniversary special featuring the Emerald Archer, plus most of his family, some of whom haven’t been seen in years, and I am so excited. To help fill the time between now and June 29, let’s get to know the fam:

Green Arrow debuted in More Fun Comics #73 (November 1941) and was created by Mort Weisinger and George Papp. His origin story has been tweaked over the decades, but the heart of it has always remained the same: useless millionaire playboy Oliver Queen ends up stranded on an island, has to learn archery to survive, learns archery harder than anyone ever has before, and decides to become a superhero when he gets back home. And really, who wouldn’t?

Green Arrow spent his first three decades as a generic blend of Batman and Robin Hood, but in the late 1960s/early ’70s he lost his fortune and discovered that poverty is bad, actually. Who knew? He became the outspoken liberal hothead of the Justice League, unsatisfied with punching giant alien starfish in the face and doing nothing about social ills like racism, pollution, and rampant capitalism. The best Green Arrow stories over the past 50 years are the ones that have retained this core of passionate social justice.

Ollie died in the mid-’90s and was briefly replaced by his son Connor (see below) before getting better in 2001 (comics, everyone!). The 2011 New 52 reboot sadly stripped out most of his history and supporting cast, but a lot of it was thankfully added back in with 2016’s Rebirth, including his politics, his long-running romance with Black Canary, and most importantly, his dumb hipster facial hair. This year’s Infinite Frontier looks to have him leading the Justice League, which is a terrible idea that I’m very excited to read about.

Sidekicks were all the rage in the early ’40s, and so when Green Arrow first showed up, he came complete with a mini-me: Roy Harper also debuted in More Fun Comics #73, as Speedy. Roy’s origin has been all over the place over the decades, but usually involves him being orphaned and then raised by Native Americans (eventually specified to be Navajo, and then changed in Rebirth to Spokane) until Green Arrow comes along.

Like Ollie, Roy was a fairly generic hero until 1971, when one of the social ills Green Arrow found himself confronting was drugs: specifically, the fact that Roy, neglected by his mentor, had become addicted to heroin. Though dated today (he has an addiction for, like, a day), this story was groundbreaking in being one of the first to depict addiction in a sympathetic light. The next few decades saw Roy change his codename to Arsenal (and briefly to Red Arrow), work on and off for the government, and do several stints with the Teen Titans and the Outsiders. Most importantly, an affair with the supervillain Cheshire led to him becoming a full-time single parent to their daughter, Lian. (Fun fact: no one in the Arrowfamily knows how to use protection. The amount of children born out of wedlock in this franchise is straight-up ridiculous.)

Roy’s life fell apart in the late 2000s after Lian was killed, but the 2011 reboot erased her existence completely, as well as much of Roy’s history with the Titans. Sigh. He was killed in 2018’s Heroes in Crisis, but returned this March in Infinite Frontier #0, and is slated to play a role in this summer’s Infinite Frontier miniseries. Coming back to life is a pretty great 80th birthday present, I think! Now give him back his daughter, DC.

Roy is a proud Fashion Disaster.

Oliver Queen’s biological son Connor Hawke first appeared in Green Arrow #0 (October 1994) and was created by Kelley Puckett and Jim Aparo. His mother was Sandra “Moonday” Hawke, a woman Ollie had had a brief relationship with in his useless playboy days. Connor grew up knowing his father was Green Arrow (Ollie’s secret identity is one of the flimsiest in the DCU), and eventually asked to be sent to a Buddhist ashram where Ollie had once spent some time during a personal crisis. There, he became an expert archer and one of the best martial artists in the world.

Since Ollie’s life is nothing but a series of personal crises, he eventually wound up at the ashram again, where Connor befriended him without telling him who he was. When Ollie found out the truth, he handled it so poorly that he literally died, which takes “deadbeat dad” to a whole ‘nother level. Disappointed but undaunted, Connor took on his mantle as the new Green Arrow.

When Ollie returned from the dead, he worked very hard to repair the damage he’d done to his relationship with Connor, which was lovely…up until Connor got shot with an infected bullet (comics, what), came out of a coma with amnesia, and wandered off to “find himself,” only to be retconned out of existence in 2011. It’s been ten years since he’s been in continuity, so I am thrilled to see him peeking out of that 80th anniversary special cover. Let him stay, DC! If Batman can have 73 Robins, let Ollie have two sons!

Back in the ’50s, one of the few recurring supporting characters in Green Arrow stories was Bonnie King, AKA “Miss Arrowette,” an aspiring superhero who existed mostly so that Ollie could puff on his pipe and tell her that crimefighting was no job for a girl. Nearly half a century later, her daughter Cissie debuted in Impulse #28 (August 1997) by Tom Peyer and Craig Rousseau. It seemed that Bonnie, frustrated by her unsuccessful superhero career, had become the crimefighting equivalent of a stage mom, pushing Cissie into archery-themed vigilantism regardless of whether or not Cissie actually wanted to do it.

Cissie was eventually made a ward of the state due to Bonnie’s child endangerment and emotional abuse. She continued to operate as Arrowette for a while, joining the teen superhero team Young Justice, but when she nearly killed someone, she realized that she didn’t have the level of emotional control needed to, you know, fight crime with deadly weapons, and retired. She kept up the archery, though, going on to win an Olympic gold medal.

Cissie recently picked up her bow and mask again in the 2019 Young Justice series, but with that book canceled, it’s anyone’s guess whether she’ll continue to show up in the new world of Infinite Frontier or disappear for another 20 years. Oh, and yes, we are keeping it all in the family here — though Cissie’s birth certificate lists her mother’s late husband Bernell Jones as her dad, Bonnie has implied that Ollie is her real father. Hmmm…

Mia Dearden debuted in Green Arrow #2 (May 2001) by Kevin Smith and Phil Hester. She was a teenage runaway, abuse survivor, and sex worker who was rescued from a violent john by a newly resurrected Green Arrow. The incident inspired her to leave sex work and go to the Star City Youth Center for help, where she met Oliver Queen…who she instantly recognized as Green Arrow because again, the man’s secret identity is a laughable fiction.

Mia promptly adopted Ollie as her new dad and started dropping hints about becoming the new Speedy, an idea he resisted at first. However, after Mia discovered that she was HIV positive, she became more determined than ever to make a difference. Ollie finally relented, and Mia became his sidekick and a Teen Titan.

Mia appeared briefly in the New 52 as a sex worker who had run away from home after witnessing her father murdering her mother, but since she only showed up for two issues, I think we can safely disregard this version of the character. Fingers crossed that her appearance on the 80th anniversary special cover means classic Mia is here to stay.

Emiko Queen debuted in Green Arrow #18 (March 2013) by Jeff Lemire and Andrea Sorrentino, well into the New 52 continuity. She is the daughter of Ollie’s father, Robert Queen, and an archery-themed assassin named Shado. As a baby, she was kidnapped by a different archery-themed assassin, Robert’s supposed BFF Simon Lacroix, AKA Komodo, who raised her to believe that she was his child by Shado, and trained her to be yet another archery-themed assassin. Also there was a whole archery cult thing going on. There’s a lot of archery.

When Robert, Shado, and Ollie told Emiko the truth about her parentage, Komodo attempted to kill Emiko and Shado, and Robert sacrificed himself for them. Furious, Emiko killed Komodo in revenge. Since then, she’s been torn between loyalty to her mother Shado, who is an assassin and all but does truly want the best for her, and her brother Ollie, who is reasonably nice and non-assassin-y but admittedly very annoying. (I love him so.)

Emiko is currently going by the codename Red Arrow and is a member of the Teen Titans. At the end of last year she had just begun a romantic relationship with Kid Flash, which I hope continues into Infinite Frontier because they are adorable.

George the Arrow Dog debuted in Green Arrow #41 (August 2015) by Benjamin Percy and Patrick Zircher. He is part Husky, part wolf, and may or may not have magic bones for Reasons. He was rescued from a dog fighting ring by Green Arrow and is now deeply devoted to Ollie and Emiko. He hasn’t been seen since the Rebirth overwrote the New 52 in 2016, but I’m perfectly content to have Connor, Mia, and Lian bring him back home with them for Infinite Frontier. Are these hints too subtle? I feel like I’m being too subtle.

There’s still no regular Green Arrow book announced for Infinite Frontier, but hopefully June’s special is just the beginning of an emerald renaissance. I’m crossing my fingers that DC does right by Ollie for his big birthday and lets the whole bow-slinging bunch stick around for their own dedicated title. Marvel is about to have two Hawkeyes on TV, DC — are you really going to let them outshoot you?