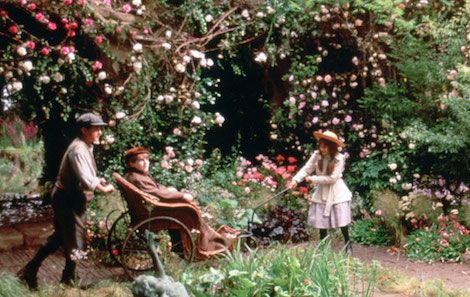 Ah, the all-healing power of simply being outside. Sure, being out in the sun has some real benefits. And then there are the fictional ones.

A while back, I noticed something about old children’s literature: any time there’s a sick child (usually wheelchair bound and obnoxious), bringing them out into the good, fresh, country air is the solution to make them well again, and also to miraculously walk. (Because logic, that’s why!) It’s most prominent in Heidi and The Secret Garden, but it exists in other books too. And part of that is due to a real-life reason.

First of all, these books were written during the nasty part of the industrial revolution. It was a time of soot and grime and horrible smog—if you lived in a city or anywhere near a factory, it was pretty gosh darned disgusting. And, long story short, that pretty much brought about the “Clean Air” Theory.

Basically, the “clean air” or “open air” theory stemmed from the centuries-old idea that dark and stagnant places bred disease. It kind of held true in urban environments, especially in Victorian times, when the poor were jammed together in small homes, and epidemics were rampant. Up until the 1940s, hospitals without gigantic windows were absolutely unthinkable. (Thanks Smithsonian!) So in that sense, books like Heidi and The Secret Garden were just echoing sentiments of the time.

And, okay, to be fair, I understand that The Secret Garden had some Munchausen-by-proxy syndrome going on in there, as well. But the idea of “well, just go outside!” still is super prominent in that book as a healing method.

There are also books like Understood Betsy, where the fresh, country air makes the eponymous character more robust. In the same vein, books like Pollyanna and What Katy Did decide that disability is a mind over matter issue that can be overcome. This is, in large part, what The Secret Garden and Heidi maintain, as well.

The idea that sunlight and the Alps (possibly at the same time) are the crucial elements needed for curing disease is no longer in fashion. At the same time we’ve developed better ways to feature disabled protagonists. (This in and of itself is still an ongoing struggle, but at least it is getting better).

So, in case you were wondering, now you know.