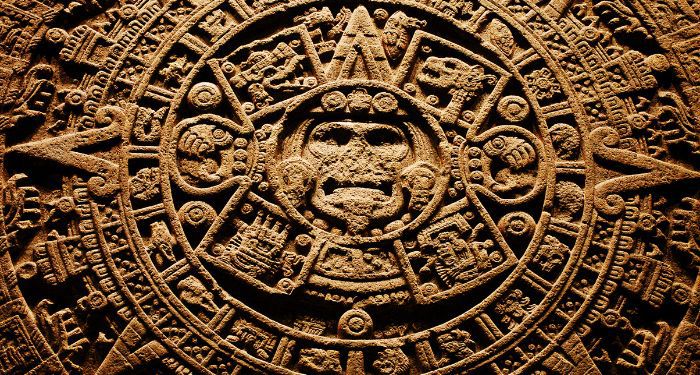 Dazzling creatures, fortified pyramids, and a fierce understanding of gratitude. The Aztecs (who would have called themselves the Mexica), both past and present, have some of the most brilliant stories in their history. It is so easy to lose yourself in Aztec mythology books, filled with characters who never take life and its many gifts for granted. There are some who may think Aztec Mythology is about war and blood sacrifice thanks to depictions of the Aztecs we most commonly see, but they would miss the true strength of the Aztecs/Mexica: their resilience. Their survival. Their very passion for life.

The Aztecs were vibrant people, native to Mesoamerica and the last of the Nahuatl-speaking tribes to travel south from Aztlan (their spiritual home). Much of the violent imagery associated with the Aztecs is fueled by racism and fear from the Spanish, who were not satisfied with a simple victory and sought to annihilate the defeated Aztecs; as historian Camilla Townsend explains it, “defining the Aztecs based purely on their European conquerors’ judgments and the look of a few silent objects leads to an incomplete picture at best.” You only need to look at the predominance of ‘blood sacrifice’ featured in Aztec mythology novels. Of course, the idea of blood sacrifice is an easy target for those capitalising on gruesome storytelling and cultural appropriation.

Aztec mythology is far more nuanced than that; born from a civilization that admired and respected its intellectuals. The Aztecs worked hard for what they achieved and never expected to receive without first giving something of themselves. That is where the idea of ‘sacrifice’ comes from. That is where the Aztecs built their faith in their community and their gods. And that is why Aztec mythology books have some of the most emotionally compelling stories you will ever read in any mythology.

Note: Today “Aztec” is commonly used to refer to the Mexica as well as the Nahuatl-speaking peoples of the Valley of Mexico and neighbouring regions. While the Aztecs never referred to themselves in this way, many of the books suggested below use the term ‘Aztec’ in its most general sense. 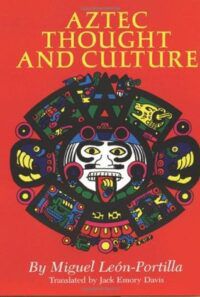 León-Portilla was one of the most respected and reputable authorities on Aztec culture and literature in Mexican academia. If you want to start with hardcore research, choose almost any book by León-Portilla. This book, Aztec Thought and Culture, is the best of the best. It is an anthropological study of Aztec civilisation, including its spirituality and mythology. The focus is more on the philosophical side, showing the presence of professional intellectuals in Nahua society; a concept previously passed over by European historians. The English edition is more of an adaptation than a direct translation of the original Spanish, so if you can read the original, I recommend you do so. A good follow-up is The Broken Spears: The Aztec Account of the Conquest of Mexico by Miguel León-Portilla, J. Jorge Klor De Alva (Foreword) and Lysander Kemp (Translation). 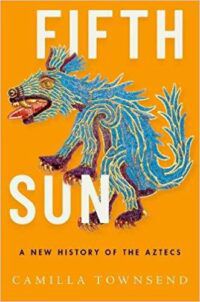 Fifth Sun: A New History of the Aztecs by Camilla Townsend

Professor Townsend’s revisionist history of the Aztecs has ruffled a few feathers, questioning the Spanish-centric history we have been told for many years. Her research in Indigenous cultures, and particularly the preservation of the Nahuatl language, move the light onto the everyday people rather than the social and political machinations. I especially loved the small ways religion and faith flowed through daily life, with a deeper understanding of why the sacrifice was such an integral factor in Aztec Mythology. A little knowledge of the history will make for an easier read, but this is still a fascinating dive into those who worshipped the Aztec gods. 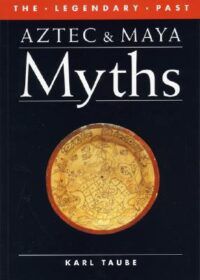 As mentioned above, Aztec and Mayan mythologies tend to overlap despite there being some pretty significant cultural differences between the two. While this book is a fantastic collection of myths from both, I really appreciate how Professor Taube discusses the differences between the two. There is an excellent array of stories showcasing the biggest figures/deities and the more subtle importance to mere mortals telling the tales. I only wish there had been a few more images or diagrams to explain various relationships and timelines. 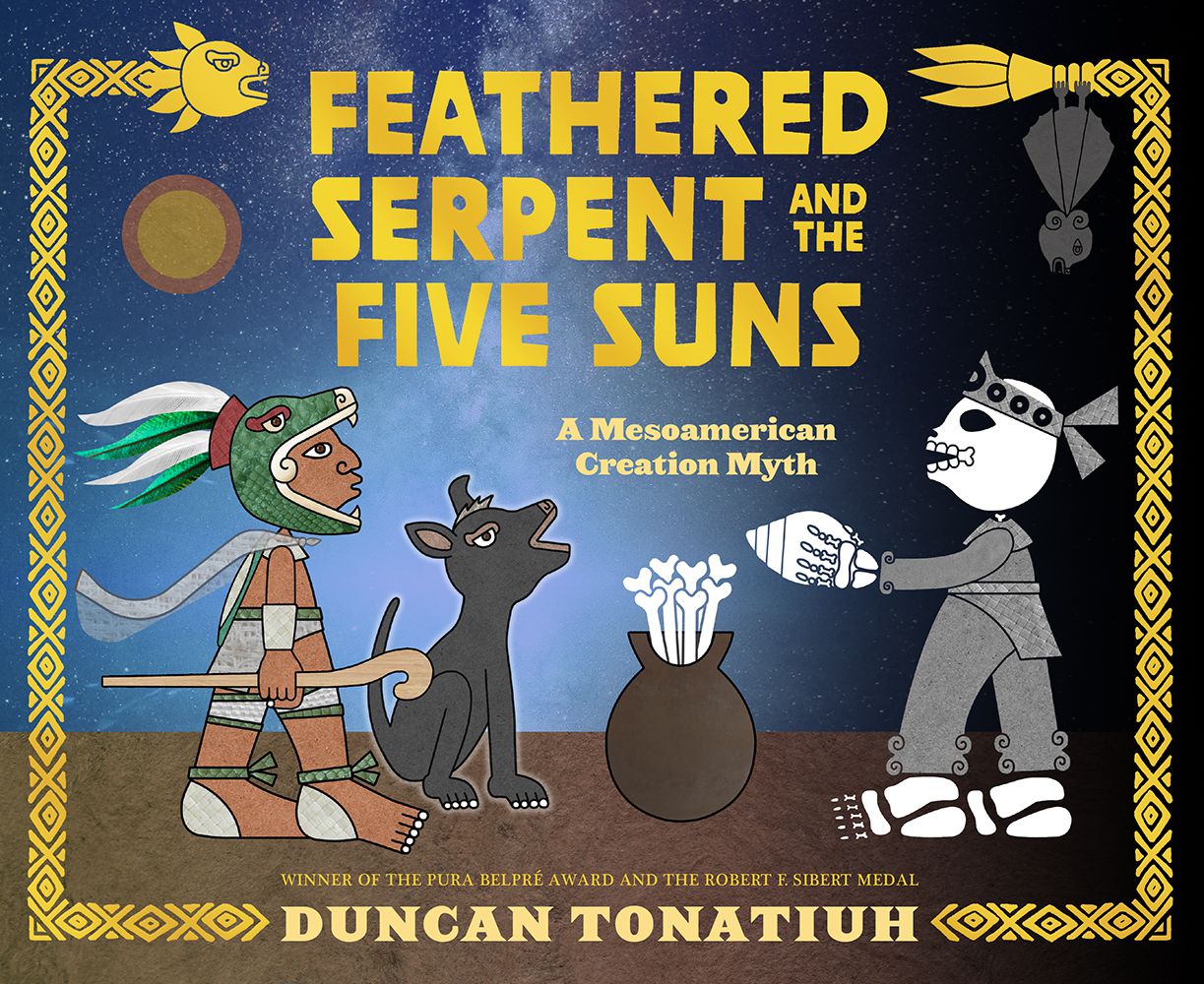 Feathered Serpent and the Five Suns: A Mesoamerican Creation Myth by Duncan Tonatiuh

I absolutely love Tonatiuh’s signature artwork, especially in this retelling of the Aztec creation myth. Tonatiuh hails from Mexico and has a style easily associated with the culture and the people. The myth tells of the gods of Mesoamerica trying to create humans but failing over and over again. As they each gave up, Quetzalcóatl did not. But to succeed, Quetzalcóatl would need to venture deep into the underworld and retrieve the sacred bones of creation. It is an epic tale across nine different levels of the underworld, each of them captured with charm and clarity by Tonatiuh. If you love this book, you should also check out Child of the Flower-Song People by Gloria Amescua, also illustrated by Tonatiuh. 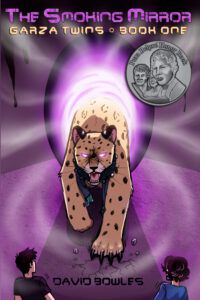 This is a great series aimed at middle grade readers with enough Aztec Mythology to nurture their growing interest. Carol and Johnny Garza are 12 year old twins. Things seem easygoing until their mother disappears, and their grieving father sends them to relatives in Mexico. Here they learn about deep family secrets, including their mother’s true ability as a Nagual (shapeshifter). As more secrets are revealed, the twins must venture into the Aztec underworld and discover what are simply myths and what are real. The entire series is enjoyable, with Book 4: Wings Above the Burning Earth released in 2021. 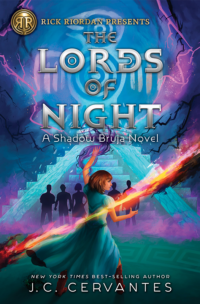 The Lords of Night (Shadow Bruja #1) by J.C. Cervantes

Fresh off the ‘Rick Riordan Presents’ list, Cervantes sweeps us up in an adventure with both Aztec and Mayan deities. 14 year old Renata is a bruja, the most powerful god born with the ability to manipulate shadows and a magical rope that controls time. She is also convinced there is a link between aliens and the Maya civilisation. She just needs to convince others. When she follows a lead for a possible alien sighting in Kansas, Ren actually discovers the troublemakers and their plan to awaken the nine Aztec Lords of Night to overthrow the Mayan gods. Cervantes sets a fast pace throughout the story with a nice mix of magical characters to keep you entertained. 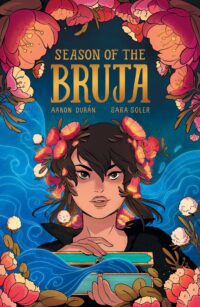 Season of the Bruja by Aaron Durán, art by Sara Soler

There is so much Mexica and Aztec heart in this book; I get chills just thinking about it! Althalia works in a paranormal museum while training with her abuela to be a bruja. Not just any bruja, but likely to be the last of her kind. It comes with a whole bunch of generational guilt and responsibility but is told in this really sweet and homey way. Faced with the return of religious oppression, Althalia must embrace her magical abilities and fight against a church determined to eliminate the bruja forever. Despite its adorable art and lighthearted approach, it strongly reflects the very real battle for Indigenous Mexicans to maintain their cultural identity. Durán wanted to keep Althalia, Isadora, and their customs within Aztec history and myths. However, just like in real life, there are overlaps between Aztecs and Mayans, so you might note some background art or imagery. It is all part of the rich tapestry that comes from this beautiful story. The first issue of this comic was released in March 2022, and the trade paperback is due for release in December 2022. 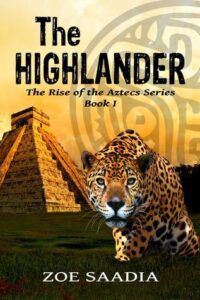 The Highlander (The Rise of the Aztecs #1) by Zoe Saadia

Okay, this one isn’t strictly an Aztec Mythology book, but Saadia has built such a rich historical fiction of Ancient Mexico; there are treasures of mythology strewn throughout. A good book on Aztec Mythology knows how to include it in everyday life. It’s also a great book featuring two boys from different cultures who meet serendipitously. One is the Emperor’s firstborn son looking for ways to introduce social reform. The other is a warlord’s son who wants to unite the people. Set in the time just before the Aztecs came to rule, Saadia’s well-researched book shares a deep insight into how myths can mould a society. 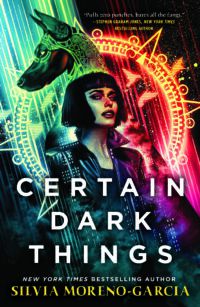 Sacrifice was an integral part of Aztec spirituality and its mythology; even the smallest drop of blood was seen as a gift to the gods. Moreno-Garcia’s book delves into the lore of Aztec blood drinkers, weaving vampiric lore with the gift of blood sacrifice. Set in Mexico City, Certain Dark Things brings together a lonely street kid with a descendant of vampires. By the author’s own description, this is a violent neo-noir that reflects the desperation of culture clashes, all the way back to the fall of the Aztec Empire. Not your average vampire novel, but definitely one of Moreno-Garcia’s best. 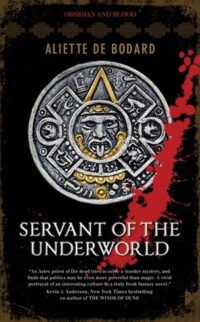 I would never have placed ‘Aztec Detective Fantasy Noir’ on my reading list, but this book was an enjoyable surprise. Set during the peak of the Aztec Empire, the High Priest of the Dead is asked to investigate the disappearance of a priestess. Acatl-tzin is familiar with the Underworld and the magic of the gods. However, he is also familiar with the suspect and has no choice but to embroil himself in the matter. Bodard offers multi-levels of detail in this fantasy world built on the legends of the Aztecs and touched by the gods themselves. This book is not for the fainthearted, especially with the rich detail she includes when setting the scene (read: animal sacrifice). The first of three books in the Obsidian and Blood series. 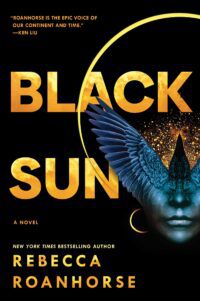 Black Sun (Between Earth and Sky #1) by Rebecca Roanhorse

The first book in the Between Earth and Sky trilogy sets the scene for magic, mysticism, and the return of a god. This story will make you question how you determine if someone is a hero or a villain. It sings to the intellectual core of Aztec Mythology, understanding that nothing is ever defined with such clear lines of duality. It starts with a solar eclipse on the winter solstice; an auspicious sign to the Sun Priest of imbalance in the world. At the same time, a single passenger travels on Xiala’s ship to the holy city of Tova. Is the world ready for gods to return? Change is inevitable, but that doesn’t mean everyone will enjoy it. 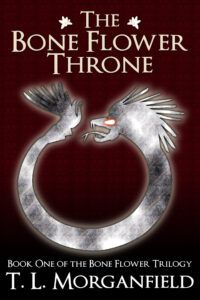 Go ahead and buy the whole trilogy. This is a dark retelling of the legend of Topiltzin, a mythical hero in Aztec/Mexican culture, as told by his half-sister Quetzalpetlatl. She was chosen by the god Quetzalcoatl to be Topiltizin’s guardian with the god’s promise to help return Topiltzin to the throne. I’m not going to lie: this one is a little gruesome, detailing many human sacrifices in the name of their faith. However, it isn’t too much of a spoiler to point out that our main antagonists are not fans of this practice and are working to change the status quo. I’m here for Quetzalpetlatl and her butt-kicking brilliance.

The best Aztec mythology books are true to the faith. They give as much as they will ever take from you. They build a sense of loyalty to characters we will never meet in person. Don’t shy away from the idea of blood sacrifices. Take a chance, give the gods your leap of faith and find a story to love.

For even more mythology reads, check out the best Norse Mythology books this side of Valhalla. Or be entertained by the more dramatically inclined Greek Myths and Legends.