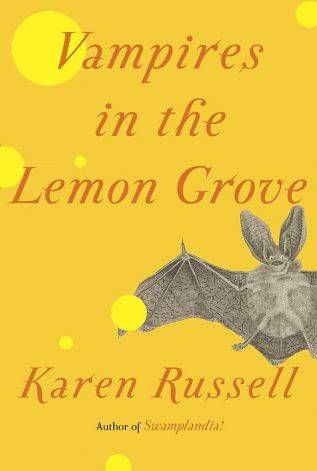 Everyone loves Swamplandia! author Karen Russell’s new collection of short stories. It’s basically got the “Universal Stamp of Amazing Awesome Incredibleness” on its front jacket cover.* However, when it comes to combing through the stories, ALL the different opinions come out.  NPR Book Critic Maureen Corrigan liked the title story “Vampires in the Lemon Grove” but LOVED subsequent stories “Reeling For the Empire,” “The Graveless Doll of Eric Mutis,” and “Proving Up.” NY Times Reviewer Joy Williams praises the same stories, but ultimately prefers Russell’s first collection St. Lucy’s Home For Girls Raised By Wolves and takes Russell to task for the stories “The Seagull Army Descends on Strong Beach, 1979” and “The New Veterans.” Meanwhile LA Times Critic August Brown loves “The New Veterans,” likes “Vampires in the Lemon Grove,” and is not at all amused with “The Barn At The End of Our Term.”

You guys, I just finished this collection, I have thoughts, as long as everyone else is grading Russell story by story, I want to too, but I want to do it with letters like we’re back in elementary school doing book reports and taking pop quizzes on Spanish verbs. Rock and roll, it’s go time.

“Vampires in the Lemon Grove”–C+

Gasp! Shock! C+??? Whatever. Most people liked this tale of an old married vampire couple who have sworn off human blood and find relief for their thirst in a touristy Italian lemon grove. The story is well-written (which is why Russell isn’t getting an F on this story), but I’ve seen all these thoughts and themes explored on freaking Vampire Diaries. That’s what happens when you write into a trend (vampires, zombies, witches, whatever). It’s basically all been said and done a million times before. It feels like Russell was either out of touch and didn’t realize how overexposed her subject matter was or arrogant and believed her take on the subject was just that special and important. And it wasn’t. As one of my writing professors once told me “I love you but I don’t love this.”

Don’t worry, I’m going to stop being such a crankfest in one hot second because we’re about to get to…

Yeah girl, you earned that A. This is the story of young Japanese women sold into sweatshop labor during the country’s industrialization, transformed against their will into half-girl, half-silkworms, and forced to spin silk for the Japanese empire. Russell has imagination for days and she gets to show if off hardcore in this tale, bringing her genre-mashing literary-and-horror A-game. Also, this story has a beginning, middle, and end, which was great, because Russell usually nails the beginning and middle of the story… but every once in a while I feel like I’m missing the last few pages. Not here. Well done, Russell-pants.

I think I know what this story’s about… but actually, I’m not sure… no I think I could summarize the plot… wait, is a plot where things happen in order for a reason… never mind, maybe not. Basically this teen boy who lives on the coast starts finding that seagulls are hiding objects in their giant, creepy nest that directly impact his life in giant, creepy ways. I felt like I was reading a really good rough draft where the author was figuring out what she was going to write about… but not the final draft where everything’s all figured out.

What am I, a second grade teacher, what am I doing giving this story an A with three plusses? Sorry, it had to be done. This story is such epic-times. Set during America’s Western Migration, the narrative follows an adolescent boy (Russell is so good at writing kids and adolescents getting up to magical hijinks, I kind of don’t want her to write about anyone over the age of 18 ever again) bringing his neighbors a glass window during a blizzard when shit goes down. I don’t want to say that zombies are involved because I don’t want to be a little spoiler bitch… but zombies might be involved. I’m not SAYING zombies are involved, I’m just saying that as much of a hard time as I gave Russell for “Vampires in Lemon Grove,” I’m equal and opposite reaction-ing that reaction for this story. Three plusses, you guys! Three!

“The Barn at the End of Our Term”–A

Former presidents are reincarnated as horses in a purgatory-like barn. This story is just so weird I don’t know what to do with myself. I kind of wonder if Russell wrote this because the ghosts of Lord Byron and Mary Shelley dared her to. Or if she and Ashton Kutcher are punking me. Or if she just unintentionally parodied herself. You saw it though, I gave the story an A. I found it so original and emotionally compelling. AND WEIRD. Just so weird, you guys. But she’s getting that A. She earned it.

This story is like the short story version of the sketches they put on Saturday Night Live after Weekend Update. It’s about sports fans that follow the battle between whales and krill in Antarctica. It’s an odd little bird of a short story. Probably the funniest story in the collection and tons of charm.

I think I’m being a little generous here, this story about a masseuse being able to manipulate an Iraq veteran’s mind by manipulating the tattoos on his back DID NOT NEED TO BE SIXTY PAGES. I would have taken a novella-length short with the material for “Proving Up.” But this? No. I feel like sometimes Russell picks the wrong shorts to expand, I liked Swamplandia! a lot. Would I have rather read a novel about wolf-girls or sleep disorder sleepaway camp? Yes, I would have rather read novels about both those things, separately or OOH TOGETHER. Also, like with “Vampires in The Lemon Grove,” I just don’t think she brought anything new to her subject matter here. But it was a cool, Stephen-King-y short, so she gets to take her B- to the bank.

I liked a lot of things in this story. I liked New Jersey bullies finding the scarecrow version of a now-gone classmate they tormented tied to a tree. I liked the secrets we discovered about our main narrator bully. We technically get a beginning, middle, and end here. Oh so technically. This is just a case of too many questions and not enough answers. Russell NEVER explains the origins of the scarecrow. Which was very literary of her. But also was very shenanigans of her. Shenanigans, Russell, shenanigans, shenanigans.

Anyone else out there read Vampires in The Lemon Grove? How did you grade the stories?

*Which I don’t love. I know it’s stylistically similar to Swamplandia! and her previous collection of short stories St. Lucy’s Home For Girls Raised By Wolves, but something just feels lacking to me. The incongruity of images is interesting. I just wouldn’t pick up the book if I had no idea what it was about, and isn’t that basically the job/point of a book cover, to make me do that with books?