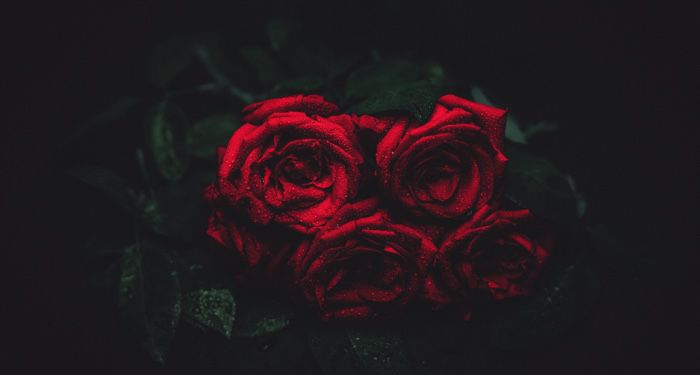 It’s increasingly difficult to see a silver lining to the current situation and, of course, in the grand scheme of human history, it’s going to be pretty difficult for winter/spring 2020 to go down as “lighter than a feather” when weighed on Anubis’s scales of judgment. That doesn’t mean, however, that being stuck at home hasn’t afforded some remarkable opportunities. I, for example, have been attending lectures about the history and preparation of various types of tea delivered via Facebook Live and Instagram by the proprietrex of Blue Monkey Tea, one of our local Pittsburgh institutions, and have also been extremely fortunate to partake in a lecture series being given by Dr. Sam Hirst via Zoom that delves into early gothic literature. Dr. Hirst is posting recordings of the lectures, and read-alongs of gothic novels and poems, on a YouTube channel for those who don’t have the opportunity to attend in real-time, and I really can’t recommend either highly enough (if you do partake, consider contributing to their ko-fi if you’re able).

Something I’ve realized after the first two sessions is that, while I’ve always been fascinated by the gothic, I’ve read a limited number of the core texts (something I plan to remedy in the coming months and years). Dr. Hirst’s descriptions have already captured the comic book area of my brain (in her defense, it’s really rather unavoidable), however,  and I’m seeing a whole shelf of adaptations that would line up beautifully beside Deadman: Dark Mansion of Forbidden Love. 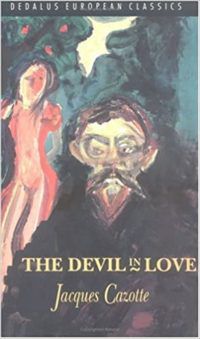 Dr. Hirst mentioned the Devil in The Devil in Love as the foundations upon which the Gothic Lucifer was built, one sprinkled with the fantastic wherein “fantastic” is defined as “a space of hesitation between the natural and supernatural.” In a truly fantastic story such as The Devil in Love, that hesitation is never completely resolved. Is the strange happening a matter of perception? Mental illness? Is the character intoxicated? Or is there actually a demon?

In The Devil in Love, Don Alvaro, a young Spanish—what else can one expect of the country which spawned the Volta—nobleman becomes interested in the occult and, with the assistance of friends already initiated into a secret society, embarks on the search for knowledge that will allow him to commune with the underworld. Like so many heroes of the genre, he reaches beyond his means, jumping immediately to the demon summoning. Alvaro is successful and his denizen of the underworld appears in the form of a giant camel head (I said what I said), which falls in love, or at least in lust, with Alvaro. Hoping to win his favor, it transforms into a maid (or a page, depending on the translation) and attempts to seduce Don Alvaro (the hero must give himself willingly to the dark side, you see). The tale wraps up in a cave full of iridescent, glowing snails, often indicative of a satanic presence and no, I didn’t make this up.

There is so much to work with artistically in this story, from the animal imagery and the demonic visions to the shifting, potentially nonbinary or gender-fluid (depending on the interpretation) figure attempting to seduce Don Alvaro. The fantastic elements of The Devil in Love would allow for a play of different background and figural styles against one another, for pages with a varying number of panels, and even the rare occasion it works for art to escape beyond delineated borders. One could even see the right team adapting the story to modern times, messing around with the blurred lines of virtual reality and chemically compounded substances, the strange realities of online relationships, and the effects of forced isolation.

The Monk by Matthew Gregory Lewis (1796)

In The Monk, Dr. Hirst explained, the fall of man mirrors the fall of Lucifer, both creatures beautiful outside, venerable and venerated, lovely shells concealing ugly interiors capable of evils most foul.

Lewis’s novel, published when he was only 20 years old, actually has alpha and beta plot lines; for the sake of clarity, I think I’d separate them into a two volume, graphic novel set and, for the sake of brevity, I’m going to focus on the alpha story here.

Ambrosio is a celebrated and popular monk who, among his other notable deeds, has a young nun (the focus of beta plot) punished for daring to enjoy herself with a man despite never having wanted to be a nun in the first place. Not long after he renders judgment, Ambrosio’s BFF Rosario reveals he is actually a she named Matilde who, after much pining, dressed as a man and entered the monastery to be near Ambrosio (listen, you’ve kept track of the Multiverse, I have faith in you). Despite having just had a young woman tossed out on her ass for doing the coitus, Ambrosio decides to romance Matilde but is bitten by a venomous snake while picking a rose for her. Matilde sucks the venom out (note from your local poison center nurse: don’t do this, it isn’t a thing) and dooms herself in the process but! As she lays dying, asks Ambrosio to bone her. Being a gentleman, he obliges.

In the afterglow, Matilde staggers to the graveyard, does a spell and survives. Alas, Ambrosio loses interest pretty quickly when consequences walk back through door, and his attentions shift to Antonia, who just isn’t that into him. Matilde (for reasons, hang tight, we’re almost there) lets Ambrosio borrow her magic mirror to creep on Antonia, and calls her buddy Lucifer, who gives Ambrosio a magic bough he uses to break into Antonia’s room. He tries to rape her but her mother shows up; Ambrosio kills her and, with Matilde’s help, kidnaps Antonia, who he later has his way with and then kills.

Matilde and Ambrosio get hauled in front of the Inquisition (not sure whether or not they expected it); Matilde is “burned at the stake” while Ambrosio is afforded the courtesy of making a deal with Lucifer. Funny story, though: Lucifer has been after Ambrosio’s soul the whole time, Matilde was actually one of his demons, Antonia was Ambrosio’s sister (the common parent being the murdered mother), and Ambrosio should have been more careful about the terms of his deal because out of his cell, the Father of Lies, points out, doesn’t specify the condition of his body or soul.

The moral of the story? Don’t be a dick.

I’d love to see a hybrid inked/Dave McKean style collage comic for The Monk, something surreal that rides the line between earthly and spectral with a bit of vertigo thrown in for good measure. In my head Matilde and Lucifer are built of mixed media shapes and lines, as is the graveyard while the monastery and Antonia are more traditional. Ambrosio transitions from the latter to the former, another piece of him shifting each time he allows himself to be tempted, each time he chooses to perpetuate evil, until he is entirely consumed by it. 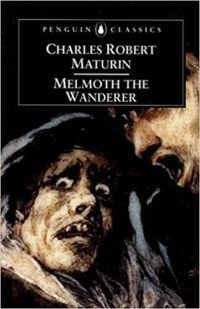 Melmoth the Wanderer by Charles Maturin (1820)

Everyone say hello to our problematic friend. He enjoys pacts with the devil that give him an extra 150 years of life he’ll spend trying to get out of his deal, perpetuating the myth of the Wandering Jew, laughing at other people as they die horribly, and preaching the virtues of Christianity (Protestantism specifically) over all other religions while acting a whole ass hypocrite.

Melmoth is a Canterbury Tales–style story- within-a-story narrative that centers on young theology student John Melmoth’s visit to his dying uncle. John happens upon a portrait of an ancestor who bears only the family surname. At the uncle’s funeral, another relative tells John the tale of a stranger named Stanton who showed up out of nowhere years before, bearing a manuscript that chronicled the journeys of one “Melmoth the Traveller,” opening with a scene of the titular gentleman laughing at a bride and groom having been struck by lightening at a wedding he was attending but to which he had not been invited. The manuscript continues with such stories as:

Everything old is new again. Not that the gothic ever really went out of style. But sometimes, excavating the roots isn’t just an intellectual exercise or a fascinating, joyous WTF fest, it’s a way to explore the ur stories we can’t, don’t want to, and won’t stop telling in different forms until there’s no one left to tell them.