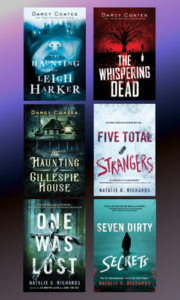 As the title of this article asks, are we in the midst of a gothic horror boom? The short answer is yes. With popular gothic horror-inflected titles like Mexican Gothic, The Broken Girls, and The Only Good Indians coming out in recent years, fans of ominous houses laden with festering secrets can rejoice. So the deeper question to ask is why are we in the midst of this gothic boom?

To understand the genre’s popularity, first we look back. The first big wave of gothic novels came during the late 1700s. The Mysteries of Udolpho by Ann Radcliffe was a hit from 1794, for example, following Emily St. Aubert’s misadventures in a gloomy castle. Gothic romance and horror remained popular for a couple of decades. That wave crested, though it produced some of the works of gothic horror that remain essential today. Namely, Mary Shelley’s Frankenstein and Jane Austen’s gothic send-up Northanger Abbey.

There was a lull throughout the mid-1800s, although Edgar Allan Poe is an enduring gothic horror writer from that time period. Again at the end of the 19th century, gothic appetites ramped up. Some well known classics like Dracula, The Strange Case of Dr. Jekyll and Mr. Hyde, The Turn of the Screw, The Picture of Dorian Gray, and The Phantom of the Opera come from this era.

Again there was a lull. Rebecca marked an extremely popular blip that led to the gothic romance craze of the mid to late 20th century. Some people attributed the lulls to times that real life was scary enough, like entire era of the First and Second World Wars, when society didn’t crave scary books. Others think this cycle is related to fin de siècle syndrome. Among other symptoms, the “syndrome” creates waves of pessimism that permeate culture near the ends of centuries. Did we see it at the end of the 20th century? Sure enough. Stephen King, Anne Rice, and Toni Morrison were key writers employing gothic modes during that time. Even Jurassic Park is a retelling of Frankenstein. Dr. Roxanne Douglas expanded on that idea in her fascinating lecture about the gothic dinosaur horror franchise.

So what about now?

We should have cleared any fin de siècle malaise we had by now, right? And needless to say, real life is plenty scary. Yet people are still hungry for thrilling stories of ghosts, monsters, and other unspeakable evils. So I’ve looked at some of the common themes in gothic horror, and it’s quite simple. Authors are continuing to make gothic themes relevant to contemporary readers by using them in new and fascinating ways. I’ve explored a handful of the themes below. So pick your poison and discover how the world we live in is really just one big haunted house.

The Past Haunting the Present

Ghosts are a manifestation of the past intruding on the present, a persistent theme in gothic horror. At our current stage of late capitalism, society is witnessing a reckoning. Past atrocities committed for economic gains are very much still with us, not as malevolent ghosts but as pernicious systems. Gothic books has sometimes sidelined these ugly truths; we visit a manor like Manderley in Rebecca but the exploited labor that funded its construction is hard to see. Recent books like Mexican Gothic and When No One is Watching make these connections between past and present viscerally clear.

The spectacular middle grade ghost story The Forgotten Girl has a similar theme. Iris discovers a neglected segregated cemetery and researches it for a school project. But she has to contend with the best kind of antagonist: a righteous character demanding justice. In this case, it’s the ghost of a girl interred at the cemetery.

Haunted houses are a perpetual theme of the gothic. They are essentially a subset of the above category. Nowadays writers are imbuing haunted houses with rich commentary on contemporary concerns. White Smoke, a YA thriller pitched as The Haunting of Hill House meets Get Out, follows Marigold and her blended family. They are moving into a beautiful renovated home in the midwestern town of Cedarville. But the house, the street, even the town itself, has secrets. They’re manifesting as creepy voices and bad smells in Marigold’s house. She’s been running from ghosts forever, but now she has to face them down. This story makes tangible the horrors stemming from gentrification and mass incarceration.

Plain Bad Heroines takes the haunted house theme, and instead of a house, haunts a school for girls. The novel uses stories within stories, a device that also pops up in classic gothic novels from Wuthering Heights to The Turn of the Screw. When a modern cast of actors are working on a film adaptation of a tragic story from the school’s past, the past and present become intertwined. In some ways the ghosts in Plain Bad Heroines are welcome, as they represent queer women whose stories are often erased from the historical record.

Gothic novels of yore were rife with malevolent nuns and monks within crumbling abbeys and monasteries. Much of that writing was rooted in anti-Catholic sentiments from the time, made tangible via decrepit religious architecture. The pitfalls of religion are still on display in our current gothic craze. They reflect real life stories of how the imbalanced power dynamics between religious authorities and people in their flock can lead to corruption.

Recent gothic novels that take on these ideas include The Year of The Witching. This menacing novel digs into the truth of a patriarchal cult and the opposing forces of witchcraft the main character Immanuelle Moore gravitates toward. It’s a bloody exploration of race, gender, family, and faith.

Another book that plays with some of these ideas is Yes, Daddy, pitched as a gay modern gothic. It highlights how religious trauma inflicted on young LGBTQIA+ people can leave them vulnerable for further abuse as adults. In this novel Jonah Keller, a young gay man from an evangelical background, moves to New York and falls under the thrall of Richard, and older and successful playwright. Pay attention to content warnings if this one intrigues you; it’s a brutal one.

Ever since I read the tweet reducing romance to “fan fiction about men,” I haven’t been able to stop thinking about it. Granted, there’s plenty of queer romance with no male characters. But I have been thinking about this tweet in conjunction with the craze for monster romances. There are certainly insidious elements to the trend. Namely, some readers enthusiasm for reading about sex with nonhuman creatures sits alongside their complaints of not being able to “relate” to romances with diverse representations of race, gender, sexuality, religion, or ability.

Still, gothic horror celebrates heightened emotions and the experience of the sublime. When cis men aren’t cutting it as objects of romantic fantasy, some readers are going beyond and turning to monsters. Monsters are a staple of gothic horror. They can represent a manifestation of science gone too far, as in Jurassic Park. Vampires can represent parasitism, as seen in the reclaimed lesbian vampire classic Camilla. Whatever is feared or misunderstood can become a monster in the gothic.

This same idea bears out in Jurassic Park. Who’s really the monster? The dinosaurs doing what comes naturally to them, or the western scientists and developers who wreaked havoc on a Central American island and then peaced out?

A Journey Into Monster Romance

With this flipped script, monster romances can be stories of misfits finding love. And so here I am letting you all know that I read Morning Glory Milking Farm, a minotaur romance. In it, Violet is a debt-ridden millennial who is willing to tackle a very unusual job involving minotaur, um, fluids, for a steady paycheck. And then one of her monstrous clients isn’t so monstrous after all. It’s both bananas and delightful.

That Time I Got Drunk and Saved a Demon is another book I’ve read in my curiosity about the monster romance craze. It’s a lighthearted fantasy adventure in which a woman and a demon team up to defeat a baddie. This demon isn’t particularly monstrous either, but like our minotaur friend above, he’s got horns. Horns are clearly on trend. If that sounds appealing, monster romances may be for you.

Back on Topic: Self Reference in the Gothic

Gothic novels love nothing more than to reference their own genre. I wrote about this more with Northanger Abbey in particular. But in our current culture and its seemingly bottomless appetite for retellings, adaptations, and remakes, the gothic is right at home.

Gothic classic Jane Eyre has seen a few recent retellings. One rendered sapphic is The Wife in the Attic, while The Wife Upstairs goes in a southern gothic direction. Brightly Burning is a YA spin on the classic tale of a headstrong woman and a mysteriously brooding man, but set in space.

One of my recent favorite gothic horror retellings, The Initial Insult, is a YA adaptation of Edgar Allan Poe’s “The Cask of Amontillado.” I adored the memes that made the internet rounds a few years ago, as rounded up in a Vox article. Those memes showed we were primed for a remake, and Mandy McGinnis delivered with the visceral tale of Tress Montor bricking Felicity Turnado into a wall for revenge. In this version, it happens at a Halloween party while the Poe references rain on astute readers. It’s a gripping gothic tale of how class gets in the way of friendships.

Many scholars point out the conservative nature of gothic horror. By this, they mean that the resolutions of these stories of the supernatural, real or imagined, often return to a status quo in which tradition is upheld. Heterosexual marriages vanquish ghosts. Characters deemed the monstrous other are pushed into obscurity.

Today’s gothic novels, which continue to upend what the gothic stands for, have the option of nodding to tradition while taking the narratives in different directions. It can make the novels a little less pleasingly predictable than their forebears, but the distinct pleasures they bring are more than worth it. After all, we are living in a time when we have to face down all the ghosts of our own making. This new gothic horror boom can help us see the path forward.