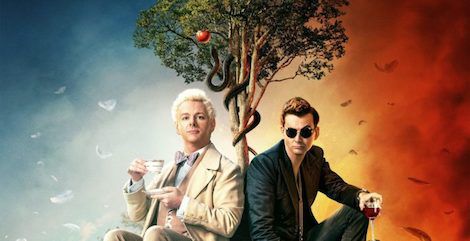 The Good Omens experience at SXSW 2019 in Austin was a dream. I attended a party where there were sword swallowers, prophecies, and a replica of Aziraphale’s bookshop. Neil Gaiman had an entire session where he discussed writing, adaptations, and more. But nothing was quite as exciting as the panel on Saturday night, when writer Neil Gaiman, director Douglas Mackinnon, and cast members David Tennant, Michael Sheen, and Jon Hamm all came together with moderator Aisha Tyler to discuss what it was like to create the upcoming show.

Remember when I saw Neil Gaiman, Douglas Mackinnon, David Tennant, Michael Sheen, and Jon Hamm, with moderator Aisha Tyler, show us previews of Good Omens, talk about the show, and then a bunch of satanic nuns crashed the party to sing an acappella version of "Somebody to Love" that had the audience on their feet? Wow, that happened. ✨ #neilgaiman #douglasmackinnon #davidtennant #doctorwho #tenthdoctor #michaelsheen #jonhamm #aishatyler #goodomens @goodomensprime #chatteringorderofstberyl #somebodytolove #queen #sxsw

Here are a few of the takeaways:

On Aziraphale and Crowley

We then got a story: when Gaiman wrote the first 5,000 words of Good Omens, the main character was a demon named Crowley who was like Aziraphale. It was coauthor Terry Pratchett who split them in two—which perhaps is why they feel so much like a unit, like a single character. “It’s amazing watching you two dance around each other,” Gaiman said to Sheen and Tennant at the panel.

The angel and the demon have very different journeys, however. David Tennant and Gaiman discussed how Crowley stays much the same: a fallen angel focused on survival and his own desires, it is easy for him to think about subverting God’s plan and fighting off the Apocalypse. Aziraphale has the harder job: he wants to believe that God and Gabriel know what they’re doing, and he makes more mistakes. Michael Sheen compared the character to a comfortable old sofa.

Sheen was involved with the show from the outset. Originally, they thought he would play Crowley. But he found on reading episode 1, he would be a better Aziraphale—he was just worried about how to tell that to Gaiman. Meanwhile, Gaiman had just written episode 1, and was worried he would break Sheen’s heart by telling him he was thinking Aziraphale, not Crowley, would be the better fit. They were both relieved to discover they were on the same page.

David Tennant was an automatic choice from early on: after a certain scene that takes place during the Blitz in 1943, which features Crowley, a demon, hopping over consecrated ground, Tennant came into Gaiman’s mind, and from that moment on, he was writing for David Tennant.

“I decided I wanted David halfway through episode 3, and every episode after that, I was writing for David as Crowley.”—Neil Gaiman on David Tennant as Crowley in @GoodOmensPrime #GoodOmens @neilhimself

Gabriel is a much smaller part in the books. But in the show, he’s played by the illustrious Jon Hamm. Hamm described Gabriel as “the shitty boss from head office” and “this impeccably put-together person who’s a buffoon.” Gabriel is Aziraphale’s boss, helping to orchestrate the Apocalypse, and Hamm said that he thinks the character really captures the duality of what’s wrong with the plan to end the world: “The book shows that both heaven and hell are shitty places to work, just one has a better view.”

Prepare for a miracle. Two more days until the #GoodOmens trailer premieres. pic.twitter.com/w2QZPtWATq

Why this Show was so Special

Douglas Mackinnon, director of the show, said that everyone on cast and crew alike said this show was special to work on. He cited the freedom they gave the people working on the film: they delegated and trusted. Mackinnon said their instructions to everyone—the composer, the titles artist, the costume designer—were: “The idea we want to get from you is the one that begins with ‘This sounds crazy, but—'”

Mackinnon also highlighted the material, reporting to laughter from the audience that Gaiman is “quite good at story-telling.” The chemistry helped as well: even on stage, they all were constantly joking and ribbing one another, at one point all doing Scottish accents, some real, some quite fake. It was clear that this show really had an impact on the people who worked on it—the sheer creativity that went into it made everyone feel like they had contributed to something wonderful.

“The practicalities of making this come to life just collectively and organically came together,” said Tennant. “From working with make-up, costume, Douglas, Neil, then Michael, it all came together and just made sense. The book came to life very happily, creatively, and hopefully exuberantly.”

Look for Neil Gaiman in the background of episode 4; and listen closely to the voices of some cartoon bunnies you may encounter. There are many Terry Pratchett easter eggs of course, including a hat in a bookshop, and some Doctor Who ones as well.

Neil said that the hardest part about writing the show was not having Terry there—he couldn’t call him when he was stuck, or when he came up with something particularly clever. He said that Terry would have loved the nuns—both the Chattering Order of St. Beryl that’s in the show, and the set of nuns that were running around SXSW all weekend, singing really fantastic a cappella versions of Queen songs.

OH yeah. Full on nunsense. #GoodOmens #SXSW How had I forgotten about the Chattering Order of Beryl? (They're singing Queen's "Somebody to Love.") pic.twitter.com/7DRnXm15Xt

Gaiman told the audience that he and Pratchett had long had the idea of writing a sushi restaurant scene into the show, so that the two of them could spend a full day in the background of the shot, enjoying sushi. Gaiman did write in the restaurant, but did not feature in the scene, and it was his hardest day on set.

On the Magic of Good Omens

“First and foremost as a fan of Neil, one of the things I’m most touched by with Neil’s work, and particularly this book, is with all of the fantastic elements and huge themes, it’s about people,” said Michael Sheen. “Our flaws, our strengths, what draws us together as a species. That trust and belief in people and humanity is what brings us here.”

Good Omens comes up in a six-part mini-series format, all at once, on Amazon Prime Video on May 31. There will be no 2nd season (“It’s brilliant,” said Gaiman. “It finishes!”) When asked what he planned to do  next, Gaiman reported: “I am now a retired showrunner, and in my retirement, I’m thinking of taking up writing.”