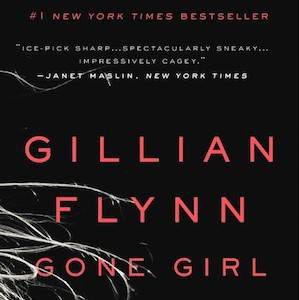 Gillian Flynn’s best-selling novel Gone Girl is a well-written crime story full of twists and turns that repeatedly catch the reader off-guard. The novel is a true page-turner. Still, when I finished it, I was left with a sour aftertaste.

Because I believe Gone Girl is a misogynist novel.

Gone Girl is the story of Nick and Amy. They meet at a party in New York City and fall in love. During the economic downturn in 2008, they both lose their jobs. The following period of unemployment takes its toll on their marriage. Then, Nick’s mother is diagnosed with terminal cancer and they move to his hometown in Missouri to care for her. Once there, Nick and Amy’s marriage spirals out of control. One day, Amy goes missing from their home and Nick becomes the prime suspect in her murder. Soon, Nick realizes that Amy is alive and is framing him for her staged death as revenge for him having an affair.

In taking her revenge on Nick,  Amy acts out what misogynist discourse claims women do to ensnare men. There are the fake rape charges, the false pregnancy followed by an actual pregnancy where the man is oblivious to the woman’s intentions of becoming pregnant, and there is the wife who works only because she wants to, not because she needs to. Amy keeps tabs on Nick’s every perceived misbehavior while she manipulates him just to twist his mind.

I don’t deny that there are women who behave in any of these ways, but by having Amy perform these actions without second thought, Flynn makes them part of her nature. Moreover, by making her do all of these things to Nick, Amy becomes a caricature instead of a character.

As individual plot points, Amy’s actions make sense, but when put together to create a character, they reveal a different picture. If a male writer had portrayed Amy this way there is a chance that he would have been called a misogynist.

Now you might be asking yourself, is it possible for a woman to write a novel that can be labeled as misogynist?

I believe it is. We live in a society where women are full citizens, but in many ways not equal citizens. For example, #YesAllWomen revealed this fact in more ways than one. The hashtag was not only a testament to the fact that yes, all women have had a negative experience with a man because of their gender, it demonstrated that there are men who are ignorant of the fact that their behavior is inappropriate and that there are women who are unaware of the discrimination they encounter everyday. Most importantly, the hashtag demonstrated that there are women who—consciously or unconsciously—participate in the degradation of other women.

I don’t know Gillian Flynn and I don’t claim to speak for her, but I believe that she did not set out to write a novel that portrays women in a bad way. The difference between the author and the characters created by the author is something that should always be kept in mind. However, ultimately it is up to the author to decide what actions the characters of the novel take.

The debate on how women are portrayed in literature tends to focus on male writers. I suggest that we widen the scope of our arguments to include all writers—men and women—who portray women in a sexist or misogynist manner. Only then can we create literature where every character is a full, and equal, citizen.