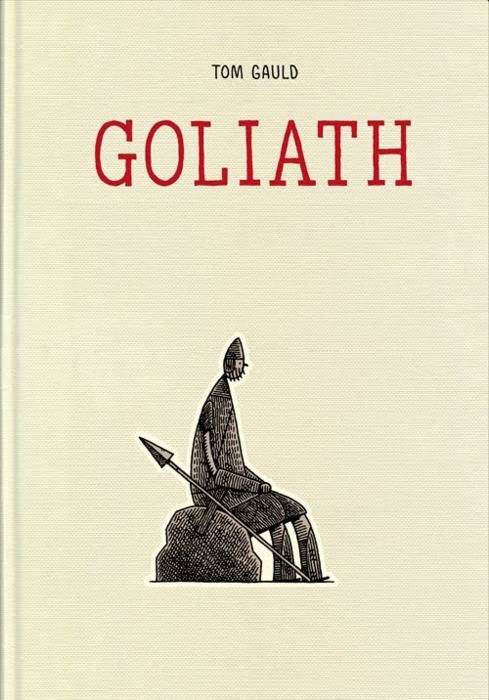 This is a guest post by Paul Montgomery. Paul writes about comics and what they can do on iFanboy.com (www.iFanboy.com). With David Accampo, he co-hosts Fuzzy Typewriter, a podcast dedicated to story, storytellers, art and artists.

Western proverb: Walk a mile in another man’s shoes, something something, and empathy shall accompany any fungus. 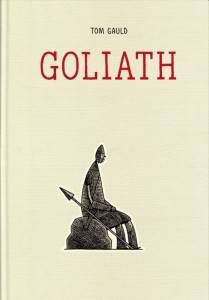 With his latest graphic novel, Tom Gauld invites us to slip into the thongs of a giant. A figure of both physical and historic stature, the Goliath of Judaeo-Christian tradition has come to represent both impossible odds and the hubris furnished through their favor. In context, he was a warrior made legend by virtue of his imposing height and insatiable ferocity. That’s context, now. To readers immemorial however, the hulking Philistine’s never been iconic for any meteoric rise, but for his ironic fall. We’re talking about a mythically proportioned killer bested by a poor boy and his slingshot. The lad David’s Biblical tussle with Goliath remains the quintessential underdog story, a template for countless tall tales, big fish stories and Stallone flicks. Goliath had everything going for him, save one pivotal stat. Depending on your level of piety, that linchpin was either divine patronage or the character David’s dramatic need for an impressive victory. No matter how you slice it, big guy was destined for defeat. Or, as Gauld posits in this comic sendup, he was the biggest fall guy to ever lose his head.

If the notion of positioning a scriptural scourge as a victim of circumstance registers as offensive, I can’t help you. Maybe it’s that I’ve rarely considered David & Goliath in the same light as other Biblical chapters. Speaking as a former altar boy and lapsed Catholic, it’s not even filed in the same neurological cluster as Saul’s ride to Damascus or even Moses in the basket. It’s over there with Hercules and Achilles and, frankly, Jake “The Snake” Roberts. But even if you do grant a solemn space in your skull, a kind of sacred sinus, to this bout, Gauld’s Goliath is the most sensitive act of irreverence in the realm of dogmatic revision. It’s inevitable that someone might conjure up some outrage for this, but there’s something so profoundly chaste about this mellow little fable. Drawn & Quarterly even bound it in a hopelessly immaculate hardcover volume of ivory linen. You don’t hold it. You cradle it. After scrubbing your hands like a surgeon readying to handle a heart. Or a white MacBook.

So, ya know. It’s all reverently irreverent.

It’s a touching portrait of a Goliath who’d rather busy himself with paperwork and “admin” duties than slay any Israelites. He’s just a hairy brown grape balanced on a hairy brown triangle like everyone else in his outfit. It’s just that his hairy grape head sits a little higher in the crosshatched night sky. Rendered as they are, each character appears as a kind of chessman. The supporting cast of enterprising Philistines capitalize on Goliath’s intimidating size, prodding him into that storied duel like a bearded pawn. 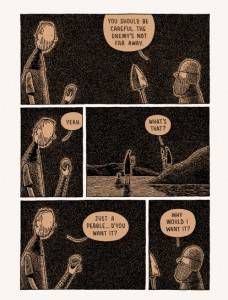 As rudimentary as the character models are, it’s not difficult to develop sympathy for Gauld’s Goliath, who reads as a kind of Bob Newhart in the Book of Job. Often blank-faced with specks for eyes, the initial impression is of a guileless victim. But those eyebrows arch quite a bit as our hero is ordered into his new role as a champion reaver with falsified credentials. He’s annoyed at his new station. It’s vital that Goliath is hapless and not necessarily hopeless. This is no oaf. This is a dreamer, taciturn and stoic, but a dreamer all the same. When the pebble does find its mark, it’s far from a moment of triumph. It’s fateful. It’s frustrating. It’s smart, too. It’s smart that David isn’t so much a re-imagined villain here as he’s simply another pawn swept up in the fog of war. In a way, he’s just the messenger. The pebble, that cruel little chunk of cosmic fortune, is the real antagonist here.

In this version of the story, we recall that history has a role for everyone, even in our own time. Often, we don’t have the chance to select our own monologue. We’re just handed sides and ushered into the spotlight for however long it will have us. It’s not so much that we have a shortage of time. It’s that we never had time at all. Time has us, and it has designs on how we might be defined by later generations for better or worse. Goliath gets a raw deal as both villain and hero. But at least, at last, he gets a chance to be a hero.

Walk a mile in a giant’s sandals and you’ll never approach his stride, but you’re bound to better appreciate the steps he has taken. The weight he carries. The impressions he leaves behind.