I went to bed last night reading a really interesting interview with Cheryl Strayed about the finances of writing work, explicitly talking it through, pointing out that – for example – $100,000 isn’t quite as magical as you might initially think. The interview was excerpted from what sounds like an amazing book I want to get my hands on called Scratch, which is full of similar discussions with authors about the actual, practical side of the writing life.

This morning, I woke to read about an Argentinian gentleman who is a crime novelist with seven books under his belt…and his night job, cleaning subway stations. “There’s no money in writing,” he laughs, at one point in the article.

Both of these articles really struck a chord with me, for the simple reason that I am constantly aware of class and finances, in and outside of my writing career. I’m always aware, somewhere in the back of my mind, of the different financial standings of the people around me, whether it’s come up or not. It’s an issue I can never manage to ignore. Maybe because I am, on the whole, a poor person, or possibly because I grew up around such disparate examples of every spectrum of financial and social class, it’s embedded in me and I can never quite get around it.

So I had to admit that I tensed up a bit when I read about the Argentinian man who writes novels alongside what is not just a day job, but is a physical labor one, a working-class gig. He isn’t writing novels alongside his tenured professorship, for example.

The reason I tensed up is that I constantly worry about people dismissing the working class and their jobs, or else idolizing them. It’s always so romantic, to imagine someone who writes a book, but at the same time they work! Like a commoner! Can you imagine?

Look at some of the writers we’ve idolized in the past. Lord Byron, or Charles Dickens, or Ernest Hemingway, to pick three dead white males completely not at random. Lord Byron had wealth and a title and class and chose to spend his time doing some writing, and we like that. Well and why not? I mean, given the chance, who among us wouldn’t like to have money we didn’t have to earn, a fancy title, and lots of leisure time in which to be a High Class Man Of Letters (who can’t keep it in his pants and who eats gone-off meat to help get them surreal poems hoppin’.) (Okay, maybe just the wealth for me, please).

Dickens, when we discuss him, we love to talk about his humble upbringings. He was very poor, his father was sent to debtor’s prison, Dickens was essentially farmed out as a boy to a shop where he had to work in a window and be humiliated and so forth. But, it’s only acceptable to talk about because he got out of that situation and Made Good, he got some money and status, which means we can treat that whole working class period of poverty and struggle as nothing more difficult than a superhero’s origin story.

Someone like Ernest Hemingway (or John Steinbeck) we praise for their writing about the working class, but neither of them are working class while they’re doing it. And when we praise and discuss the working class in the books, it’s easier because they’re fictional and because we can safely tut and sigh and be concerned about them. “Oh, it’s awful to be poor, isn’t it? Those poor characters!” Hemingway and Steinbeck can talk all they like about the working class and how interested and connected they are, but they aren’t really. It’s as believable as if I, tomorrow, declared I was pretty gosh-darned “gangster.” You would have some doubts. 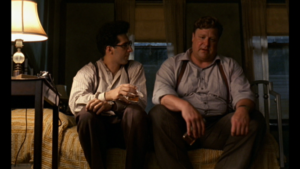 I love this film, but it’s so weird that I’m very understanding when people don’t like it at all. Go try it!

(An excellent and hilarious example of what I’m talking about with regards to Hemingway and Steinbeck is the film Barton Fink by the Coen Brothers. Barton Fink, a neurotic writer who goes to Hollywood, waxes endlessly about the Working Man and his great passion for them…doing so by chattering over John Goodman, a working-class salesman who can’t get a working-class word in edgewise. It’s an insane, terrific film, and not enough people have seen it. Get thee hence.)

So what I would love to see more of is a celebration of the actual working man, someone like the Argentinian gentleman above, who is writing and working, and the one is not necessarily viewed as a miserable time in the trenches while awaiting the other to pull him out. You see what I mean? Instead of knowing about a writer who works and immediately thinking “Well I hope your book is popular and you don’t have to work anymore!” just celebrate both. Celebrate the remarkable ability of someone to work a hard job, day in and day out, but still manage to summon up the mental clarity and discipline to put fiction down on paper. As an owner of many a day job over the years – as are most of you, I am sure – I can attest to how hard it is.

We should celebrate and be impressed by it, even over someone who is a full-time writer. Full-time writing is also hard, believe me, but it’s not the same as schlepping TVs for eight hours and then trying to work when your spine hurts and all you want to do is lie down, or cleaning a subway all night and then having to pick between a bit of time with your children, and a bit of time writing.

The fact is that the Argentinian gentleman is mostly right, there isn’t any money in writing – and except for a century-long-blip on the radar, there never really was, honestly – so when writing gets braided together with a job, I want to start praising that. Not offer sympathy and hope that someday, the book sells and they get to emulate Lord Byron at long last.

I mean, who really wants to eat rank meat, anyhow?