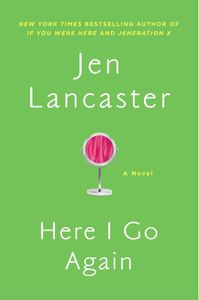 In this giveaway sponsored by Here I Go Again by Jen Lancaster, we challenged you to share your most craziest high school horror stories.

Many of you rose to the occasion, and the competition was fierce. Here’s the winning entry from Elizabeth B. Thanks to all who participated!

As a fourteen-year-old high school freshman, I was ecstatic to be asked to the Homecoming Dance. It was the first social event of my high school career, and even though I was only going with a flirty friend, that friend was a cute junior with potential. He brought ice cream to my locker after school and he asked me to go as we shared spoonfuls. It was a natural, charming suggestion and I said yes instinctively. No more grade-school awkwardness, I thought. No more hanging out in big groups, dancing with my girl friends while the boys clumped along the sidelines of the gymnasium, gawking. I was moving into a new phase in my life.

Unfortunately, my mother didn’t see the three months between eighth and ninth grades as a giant chasm between childhood and adulthood like I did. When I told her that my first date would be with a seventeen-year-old junior who intended to drive me to the dance, she was not on board. Since we lived less than a mile away from the school, and I trusted this guy, I didn’t see the problem. We had an enormous, drawn-out, teenage angst-filled battle about whether or not I was allowed to be passengering in cars with boys at that point in my life. I’m pretty sure I only won in the end by stating that I was either going with my date, in his car, or not going to any dances at all, which would result in poor relationship skills and, ultimately, spinsterhood. After she reluctantly agreed to let me go, I felt bad that I had to resort to emotional blackmail and that my mother didn’t trust my judgment. My mom felt bad about the next four years of our lives together.

Tension was still in the air on the big night. I got dressed up and waited impatiently by the door, hoping to make a quick escape. My parents were not to grill him or embarrass me in any way, I instructed. No photos or declarations of cuteness or coupledom were allowed under penalty of death. Finally, headlights turned onto my street. But, wait – did I hear TWO car doors slam? My date approached the door with a strange shadow following close behind.

His mom. Yeah, he brought his mom on our date. Or rather, his mom brought him, since, according to her, they lived too far away for her to trust him on the highway with his newly minted license. Oh, the irony. I had fought tooth and nail to be allowed the privilege of stretching my wings a bit further than my parents thought wise, only to have my feathers suddenly clipped without warning in the most unexpected way. The worst part? After some strained chit chat amongst the parents, we made our way to the vehicle. My date drove, his mom sat in the front, and I languished in the backseat by myself like the Invisible Woman. He concentrated on driving, she listened to the radio, and I died a little on the inside.

After five or six agonizing, conversation-less hours, we finally got to the dance. I found out the main difference between grade school and high school was that almost everyone danced in big groups instead of automatically splitting along gender lines. Romantic, it was not, but we had a good time and managed to laugh off the car situation to our friends. Unfortunately, we still had to survive the drive home at the end of the night. After a sad repeat of the drive there (did no one think it was possible for me to sit in the front?), my date reluctantly walked me to my front door, gave me the quickest and most awkward hug of my life (under the porch light and probably in full view of both of our mothers), and bolted back to his car. After such an inauspicious start, our possible romance fizzled completely, but we did manage to remain friends. Ah…memories.