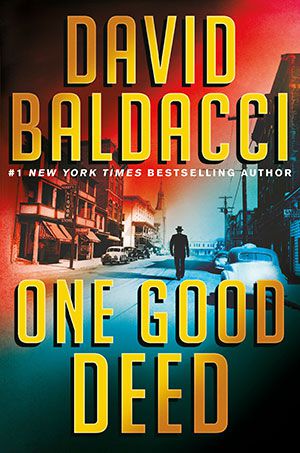 This giveaway is sponsored by David Baldacci’s One Good Deed.

It’s 1949. When war veteran Aloysius Archer is released from Carderock Prison, he’s sent to Poca City on parole with a short list of do’s and a much longer list of don’ts. But the small town quickly proves more complicated and dangerous than Archer’s years serving in the war or his time in jail.

When a murder takes place right under Archer’s nose, police suspicions rise against the ex-convict, and Archer realizes that the crime could send him right back to prison . . . if he doesn’t use every skill in his arsenal to track down the real killer.

We have 5 copies of One Good Deed by David Baldacci to give away to 5 Riot readers! This sweepstakes is open to residents of the United States (excluding Puerto Rico and all other US territories). Entries will be accepted until 11:45pm, August 6th, 2019. Winner will be randomly selected. Complete rules and eligibility requirements available here.