Last Father’s Day, our kid was less than a week old, so gift-wise I was able to get away with the classic “Here’s a human being I incubated and expelled from my body.” This year’s gift, while less physically demanding, has actually required some serious thought. Should you find yourself without a present for the father figure(s) in your life, you’re welcome to piggyback off my brainstorm.

If you want to make him nostalgic:

This one’s coming out in paperback soon, but c’mon, it’s for Dad! Get the hardcover.

With The New Frontier, the much-missed Darwyn Cooke spins a yarn that takes the reader from the Golden Age of comics to the Silver Age. He features more heroes than you would think possible, and does so without those appearances feeling forced nor superfluous. If the Silver Age was before your dad’s time, this would be an excellent introduction to the classic characters. If the father on your list was reading comics way back when, then he’ll enjoy recognizing the history Cooke literally draws on. And if he doesn’t catch every allusion, there’s a great appendix wherein Cooke reveals his inspirations for both particular beats and even individual panels. Go on, flip through the book. Breathtaking artwork, right? Dad may not have loved comics before, but he’s got to now. And in the unlikely event that he can resist the vibrant colors,  borrow your gift.

If you want him to share with the kids:

Anne Shirley may have had the market cornered on impetuous redheads, but she’s got some pint-sized competition. In this charming graphic novel, Claudette—along with her brother Gaston and their friend Marie—sets her sights on slaying the infamous baby-feet-eating giant. The consummate world-building offers something for all ages, and before you know it, Pops will be so invested in the characters and their town that you’ve already got his birthday present in the sequel, Dragons Beware! Hours of read-out-loud fun await, and he’ll have a good time playing against type and voicing Claudette’s and Gaston’s emotionally unavailable blacksmith father.

If you want to give him a break from sharing with the kids:

Just in case the bloody battle axe didn’t give it away, I’m here to tell you that this series is not one with which to create fond read-aloud memories (unless Dad is reading aloud to a 17+ crowd). Skottie Young takes his Little Marvel talents and applies them to the gruesome exploits of Gert, a 37-year-old who’s been wandering around in the body of the seven-year-old she was upon being transported to Fairyland. After thirty years of trying to return home, she is understandably hot-tempered, and unrestrainedly violent. For a father who wearies of tea parties, the wanton killing of candy-colored creatures (courtesy of Jean-François Beaulieu) will be a welcome release.

If he makes up answers for those “How does that work?” questions:

Yeah, I know what I said up top about hardcover vs. paperback. But this is going to be a splurge, so do yourself a favor and go with the less expensive option (anyway, the paperback volumes are cozier to curl up with).

You’ve got a dad who gently trolls the kids out of ignorance or for amusement. He’s got a kindred spirit in Calvin’s dad, who offers up plausible but fantastical explanations for ordinary phenomena. Buy a father this essential collection and he’ll be able to crib off Calvin’s father…or see what kind of (delightfully) sarcastic rascal that sort of parenting results in.

If you want him to learn real answers for those “How does that work?” questions: 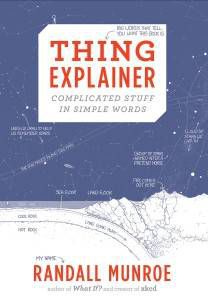 If you want him to have the feels:

The dad in your life may be interested in reading something from the guy who writes Old Man Logan. But he is not prepared for the emotional journey that is The Underwater Welder. It’s the eerie tale of an expectant father who is thrown for a loop by the resurgence of unresolved issues with his own father. Hauntingly beautiful black and white sketches convey a sense of place, from a seaside town to the depths of the ocean to the recesses of the protagonist’s mind. The dad you give this to will finish it and know that the kind of parent he is is up to him, and not his childhood, and that the birth of a baby is a scary but wondrous new beginning for more than just one creature.

What are your Father’s Day picks?