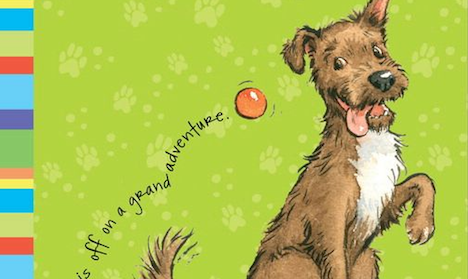 I have grown accustomed to books that either assume as given, or actually PREACH the idea that boys and girls are basic rough equivalents – that there are no such things as ‘boy books’ or ‘girl books,’ that you can enjoy both stereotypically feminine and non-stereotypically feminine activities, that these two do not mutually exclude. That you can be a princess with a sparkly crown and soccer cleats, or with a secret monster-fighting identity, or that you can be a princess and also a boy, or a hamster. (Wait, what?) 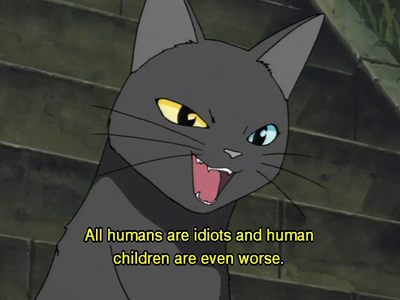 Ribsy is about a dog who accidentally runs away from his boy, but it’s also about how boys and girls are super different and always doing different things because gender essentialism. “Boys were satisfied to pet Ribsy, but girls were inclined to squeal and say ‘Isn’t he darling?'” Girls do a lot of squealing in Ribsy. They also giggle so, so much.

And if you are a dog, you have to know what to do with girls: you wait them out until they are done hugging you or giving you lavender bubble baths and eventually they will go away and you can get back to doing cool boy stuff like chasing balls and riding bikes.

There’s a particularly aggravating scene in a classroom – Ribsy has been allowed in as a temporary mascot – where the children are participating in show-and-tell. One girl brings in a doll with “a pair of real little sunglasses. The boys looked scornful.” (The girls responses are not mentioned but probably they squealed or giggled.) And then a boy brings in a tool chest. “The boys looked interested. They wished they had tool chests, too.” (The girls responses again go unmentioned so I guess more giggling?)

And then poor Mrs. Yaxley comes in with her son and his ill-fated squirrel, which Ribsy will eventually chase. Mrs. Yaxley is there because the rule in the classroom is that anyone who brings an animal for show-and-tell “had to bring his mother, too. The mother’s job was to take the pet home.” I’m tempted to give this a rage-pass, or at least contain the rage to my own living room, and cite historical context. 1964! When women with jobs besides taking the pet home were fictional beasts! As were stay-at-home dads! (No they were not! I’m trying to grant you some grace, lady Cleary, but you’re killing me.) I cannot give a pass to “she looked as if she had not taken time to put on her lipstick” OMGHGHAHHGHHAHGHAHHGH poor Mrs. Yaxley, not only consigned to a lifetime of bringing pets to school and taking them home again, but shit-talked for not looking hella polished while she does it.

So Mrs. Yaxley and her young lord Danny or Donny or whatever, her SON, they bring a squirrel to school and the reason they are late is because they had to get a box for it and bore some air holes in the box and “’I am not good at boring holes.’ All the boys thought this was funny. They were sure they would be good at boring holes.” IS THIS A SEX JOKE it can’t be a sex joke, right? This is a book for ten-year-olds. This has to be a Lol Women And Tools joke, doesn’t it? Does that make it better? Or worse. I honestly can’t tell.

I am this girl so much.

Mrs. Yaxley, I feel compelled to mention, is deeply and continually apologetic for taking up so much class time. And the squirrel hasn’t even escaped yet!

The squirrel escapes. There is a wild squirrel running loose in a classroom. “The girls pulled their feet up from the floor. The boys sat on their desks to get a better view.” The boys actually remove themselves further from the squirrel but the way the girls’ actions are described implies fear while the boys’ implies interest. Representation MATTERS and words mean things.

Ribsy turns out to be a “boy book” in the worst sense, not in that it’s about a boy or concerned with boy things (what even are those), but in that girls, even when physically present, are derided or elided. WHAT DID THE GIRLS THINK OF THE TOOL CHEST I bet some of them were like, Cool cool cool.

And I’m so mad about all of this. I’m just trying to read to my kid at the end of the day so that she goes to sleep, I ain’t trying to have a conversation about sexism. And I KNOW I can just be like, What do you think about that statement that all girls want to hug a dog and squeal? Is it true that women can’t bore holes? (If this was a sex joke, then ok those of us who don’t have penises can’t bore holes in the way you’re meaning it without some sort of prosthetic, so fine you’ve got me there, but this had better not’ve been a sex joke.) I know the conversation about media being fallible, and the process of critical reading, are both hella important. BUT IT IS THE END OF THE DAY I JUST WANT SEXISM TO NOT BE A THING FOR LIKE TEN MINUTES WHILE I PUT MY KID TO BED.

So I just, like, censor it. I don’t even fucking read that shit, if I see the words “boys” and “girls” in a sentence I just skip the hell over that sentence. I’m being lame, I know, but I’m so fucking tired.

Maybe we’ll pick up the Ramona books. I dunno. I don’t want to try to escape by only reading my kid books about girls because that perpetuates the boy book::girl book dichotomy. BUT I’m curious whether Ramona is cool in her own right or only cool for her tomboyishness. After all, even Beezus, according to Henry Huggins, is only pretty sensible “for a girl.”

How do you feel about sexism (racism? classism? I wanna read some Frances Hodgeson Burnett to my kid but THOSE BOOKS OMG are a product of their time) cropping up in your books? Do you dialogue it? Avoid it? Rend your garments? What is the appropriate response, here.