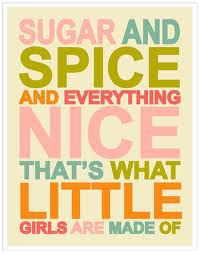 The topic of likability is one that gets played out a lot when it comes to female characters in fiction. Rarely do we see much in terms of what it means to be a likable or unlikable male character. He can be complex, he can be nice but with a wicked streak, he can be a villain, a charmer, a saint, or a sinner. He can be anything within the range of “likable” or “not likable,” and his value does not diminish wherever it is he may fall on the continuum.

A male character is free to be.

We talk at lengths, however, about female characters’ likability. And it’s a binary, with absolutely no room between the two end points. Female characters are either likable or they’re not — they aren’t allowed to be more dynamic or more than one of those two subjective, meaningless labels. Sure, she can be described as nice but with a wicked streak, but that ultimately makes her unlikable because she’s not easily identified as one simple thing.

Readers do this in their reviews and reactions to girls in fiction. I don’t know how intentional these reactions are or if readers are even aware they’re doing this, but it’s there, and it happens again and again. If a girl character doesn’t fit a pretty box, and if she doesn’t act in a way the reader deems acceptable — either via their own life experiences or perceptions of how someone in a given situation should act — she’s unworthy.

In the YA fiction realm — and beyond it, too — we trap teen girl characters into two mythologies. The first is that girls should only have decorated edges, smooth and palatable. The second is that of the girl who is “not like” other girls, who often doesn’t know what it even means to be a girl.

The Myth of the Girl Who Is Easy to Digest

From a review of a recent YA book featuring a female main character. Why DOESN’T she care about everyone else but herself, anyway?

What is it about a girl who goes after what she wants that’s frightening? And worse, what’s the problem with a girl suffering through something life-altering who chooses not to revel in her pain and anguish for 300 pages but instead has a life outside of it? Note this isn’t a life without that pain, but a life that exists despite it.

It’s interesting to read reviews of books that tackle tough topics through the framework of this mythology. For many readers and reviewers, a girl who has been sexually abused in a story, for example, can’t pursue sexual relationships after the fact. Readers find it unbelievable that her pain could be “forgotten” so quickly or that she’d truly feel comfortable ever wanting to be in a relationship again.

Many readers want to readily pin a girl character down and tell her that there is only one means of dealing with her pain. And that way is to operate on that pain sunup to sundown. Girl characters only have one standard operating mode — good and pure — and when it’s been compromised, they can only ever be broken thereafter. (That is how they maintain their likability, even though it’s impossible to ever be likable again when your value as a girl has been compromised by choice or by force).

When we believe and react negatively to a girl character who pushes against our expectations of what it means to be damaged, we reiterate the mythology that girls can only ever have smooth seams. If she lives and thrives despite her situation and experience, she must be wrong.

If she chooses not to live and thrive but instead needs to grieve or express anger or rage or act in a way many would consider ugly or downright intolerable, she’s still wrong. At times, she might as well just kill herself because she’s so miserable. Why can’t she just suck it up and move on with her life?

Girls becomes hard to swallow when they force us to consider an alternative to being either likable or unlikable.

When they becomes complex.

Likewise, when a girl in a story does something for herself without considering the ramifications it may have on another character, many readers call her out. How dare she not think of her father’s feelings when she chooses to sneak out at night? How dare she not consider her best friend when she decides she’s ready to pursue a romantic relationship with the boy she’s been crushing on for months? How dare she put herself and her own desires above anybody else’s.

Girls should be the secondary acts in their own stories, rather than the primary ones.

That’s what makes them easy to digest.

The Myth of “Not THAT Kind of Girl”

The victim blaming aside, the thing that’s interesting here is the reviewer wonders why they should care about a girl who makes dumb drunken decisions.

A rampant declaration in YA books, more than any other category of books, comes from female characters who say they’re “not THAT kind of girl.” Or, even better, the girl who tells us that she “doesn’t know what it’s like to be a girl.”

As if being a girl is only one thing, and you either are or you aren’t.

Perhaps this is related to the first myth, but it is perpetuated within the text rather than by the reader: you can either be the thing or not be the thing. In this case, the thing is the stereotype of what a girl is — but it’s a stereotype that plays right into the problem of the binary of girlhood. “That” kind of girl is either a princess or a whore. “Being a girl” is either being pretty and submissive or being a heart-on-her-sleeve, boy-crazy romantic. Just read this description of a forthcoming YA romance; it plays into this idea in a troubling way. You can be a girl and be athletic without having to denigrate the idea of “being a girl.”

But what’s interesting is that the girl character who is “not that kind of girl” or doesn’t know how to “be a girl” isn’t making a statement about likability. Because in most cases, why she chooses to describe herself as such within the text is as a means of suggesting that she is a dynamic, complex, and complicated character. That her interests, her actions, and her tastes are varied. She lays out for the reader that she won’t be boxed in as likable or unlikable.

We tell girls if they can’t fit on the right side of the binary, their stories aren’t worth hearing. 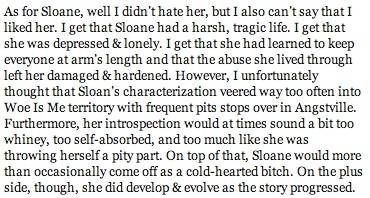 Girls should never feel sorry for themselves or the situations they’re in. Fortunately, this one gets more palatable.

Want to read some YA books that reject these binaries and present multidimensional girl characters? Here’s a short list to get you started. Pass these along to all of those girls in your life who need to see being a girl is much much more than “being a girl.”:

– Anything by Courtney Summers. The review shown above is from This is Not a Test, which would be an excellent place to start (perhaps it’s the most subdued of Summers’s characters, since she only wants to kill herself to escape a life of abuse and abandonment). Then give Cracked Up to Be a read. Actually, before either of those, start with Summers’s tumblr post “Writing for Girls.”

– Amplified by Tara Kelly. Jasmine decides she’s not going to listen to her dad’s advice about what she should be doing after high school. She decides she’s taking her future into her own hands — there are plenty of stumbles along the way, but it’s the agency she shows which bucks both these myths.

– Uses for Boys by Erica Lorraine Scheidt. Anna’s aching because of how her family’s fallen apart, and she fills that ache — and tries to build a life for herself anew — by having sex. But it doesn’t make her a whore, and it doesn’t make her emotional pain less real. And you know, sometimes endings are just endings. They are neither hopeful nor sad.

– The Moon and More and every single other one of Sarah Dessen’s books. But I think I talked a little bit about this already — we put so little value on the story of a whole girl who isn’t just an easy thing to put a label on. Perhaps because Dessen’s girls have full lives, internal and external, is exactly why she hasn’t earned the sorts of prestigious accolades and legacy within YA history she deserves.