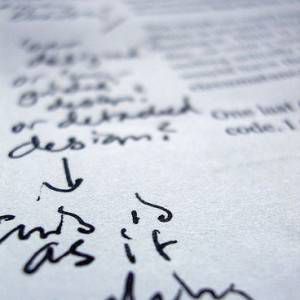 A question in a summer of re-reading: How do you literally handle what you once loved and what you might love again if you find yourself welcomed? It’s a fraught thing to nudge from the shelf creased binding and to open those frayed covers and confront the mind of a former self scrawled out across the margins. Such has been my reading life this summer, and before thinking a little further about the “gifts” of re-reading, here are a few summary thoughts on my recent re-reads of three classics (thoughts that will no doubt haunt some future me scanning back through Book Riot archives via a Wi-Fi chip wired into my cerebral folds):

1) This still seems Faulkner’s most accessible novel, the story of Joe Christmas and his indeterminate racial heritage and the terrible consequences for him and those touched by his life in the American South of the early 20th century, a story that was even more ugly than I remembered; 2) in this 50th anniversary of the Mississippi Freedom Summer, it’s worth remembering what “segregation” means and how inculcated racial hatred was in the South not at all long ago in terms of historical time; 3) of the books discussed here, A Light in August is the one I’m least likely to re-read in the future in part because I started missing Christmas toward the end of the book, where he seems to disappear as a lived-in character far too early–although a critic might point out that the way in which other people (e.g., characters) attempt to take control over Christmas’ story is part of Faulkner’s depiction of the South’s racial dynamics and the disenfranchisement of anyone who might maybe possibly be Black.

1) I was amazed even more than in past readings with how condensed this is despite its epic vision of history and human capacity (and I mean capacity as I think Conrad means it: the farthest extremities of courage and evil); 2) I really got into reading parts of the novella out loud to imagine Marlow’s awed and testy re-telling as he and his listeners sit anchored in a dark fog on the Thames; 3) the imaginative strain resulting from the collision of Euro colonials and pre-Industrial Africa makes me wonder not about the faraway places but the right-up close inside myself and in the people around me every day where the limits of my imagination often short circuit real shared understanding.

1) Still bleak and beautiful and seriously just wow on a prose level—even if you can’t get into the main character (and the only name we get for him is “Fuckhead”) roll with the language and the imagery—this is what sentences, especially short sentences, can be; 2) a good intro is the New Yorker podcast of the story “Work,” read and discussed by writer Donald Antrim, who I paraphrase when I say that so much of Jesus’ Son reads like it has a motor on it.

Probably one of two factors motivate re-reading: 1) love of character or 2) a pleasurably gnawing sense that more waits to be discovered. These three re-reads tend more to the latter. Joe Christmas spends his whole life in A Light in August wrestling often violently with his identity–his supposed Blackness and its consequences despite his passing for White and his never having any real certainty of his ancestry beyond his apocalyptically hateful White grandfather’s aspersions. In the story “Work,” Fuckhead spends most of the time with a friend in what pretty convincingly comes to seem a dream the friend is having about his flood-ravaged home and broken marriage, and still Fuckhead doesn’t question this “reality” because the experience that unfolds as he inhabits his friend’s dream is (also convincingly) one of the best days of Fuckhead’s life.

In the New Yorker podcast of “Work,” Antrim is asked about Johnson’s recent disavowals of Jesus’ Son as not much more than bar tales. Antrim says you can’t listen to a writer talking about something he did long ago. It’s a bit like what Antrim says about Fuckhead: “He can’t tell us what he doesn’t know about himself.” It’s not a bad way to describe the experience of re-reading extremely copious margin notes written by an incarnation of myself now more than ten years gone. It was with grating restraint that I mostly resisted the urge to cross out several bits of my old scribbling. But of course I am grateful to that younger man for sitting where he sat, fingering over these same pages, surrounded by furniture this body has by now mostly wrestled out to various curbsides in towns left behind. In those/these pages: the same words overlay the same words sieved through the conjunction separating and joining me and me. It’s important to remember: Time and Experience are essential and devastating shorthand. It’s important to remember: to carry a name through the years, to know your own dreams, to share in the telling of the living.