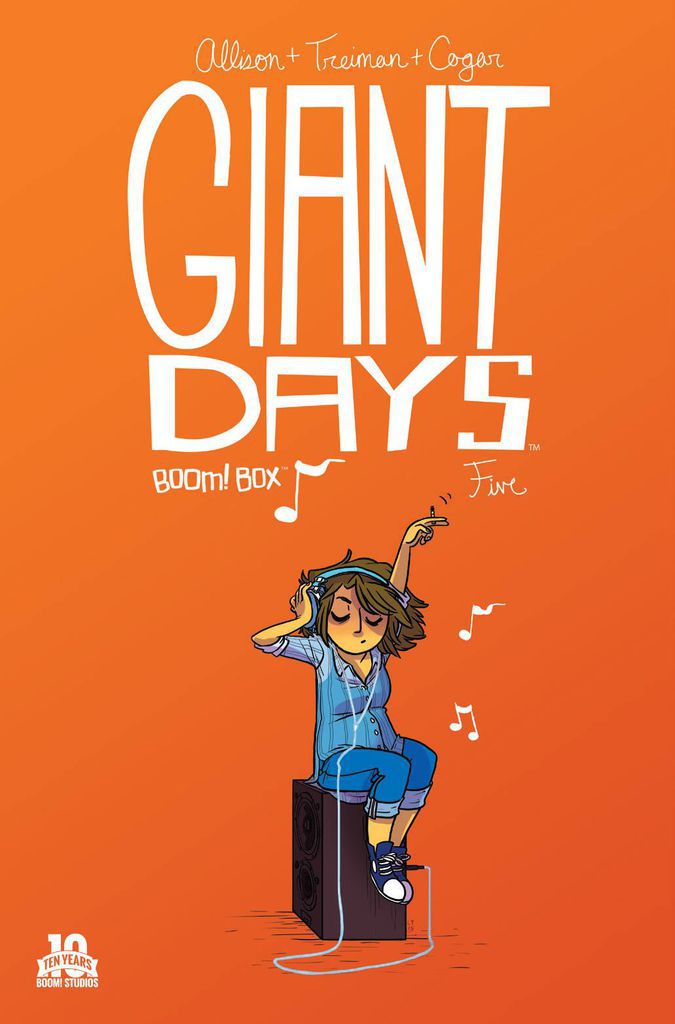 Giant Days is a deceptively simple story of three friends that start University together in England and over the course of three weeks become firm friends. It’s so well done that Giant Days has become one of my favourite comics of the year so far. The writer is John Allison of the webcomics Bobbins, Scary Go Round and Bad Machinery. This is his first published comic and, weird side fact, John lives where I used to live in Greater Manchester. Giant Days artist is Lissa Treiman who is currently working for Disney and the publisher is Boom! Studios.

A friend recommended Giant Days to me and it grabbed me instantly. It’s got irreverent humour, snarkiness and friendship–all things I value. Other people seemed to love it as well, as a six issue run has been extended to twelve issues. Which is great, because it means we get more time with the protagonists, Esther, Daisy and Susan. The characteristics of these three bring life to the comic in a way you rarely see.

Susan is level-headed and sensible, Esther is a drama queen, and Daisy is innocent and awkward thanks to her home schooled background. The first issue introduces these three characters so brilliantly you feel like you have always known them, it really shows how you can introduce characters successfully in a comic. If you have any interest in being a comics professional then you need to read Giant Days #1.

The story grows from light of interpersonal drama to more serious issues, there is not too much of an overall plot, it’s more of a melodrama with Susan and McGraw adding some connections between the stories. Issue two deals with a rampant case of flu going around the university and how each of them deal with the illness – or don’t in the case of Daisy and her knockoff Polish cure medicine.

All pervasive university lad/bro culture features in issue three, and Esther has to deal with being placed #3 on the fresh meat list. It’s a funny storyline and shows how you can write about a serious topic and still make it entertaining. Issue four deals with club drug culture and getting crushed when your crush says no. Daisy comes on to her new friend as she’s coming down and it doesn’t go well.

As well as the humour throughout the issue Daisy is shown trying to deal with rejection, leaving her very unsure not confident in her sexuality. Life’s extra complicated for Daisy as she works out how she feels about being lesbian. Giant Days carefully shows how these women are struggling to find themselves as they take the last steps towards being an independent adults. It’s watching this progress that makes Giant days compulsive reading. Issue five adds even more complexities thanks to a winter ball!

Susan and McGraw, her erstwhile nemesis, hit it off, Daisy decides to try kissing boys and Ed finally admits he loves Esther. Hearts are on sleeves and all the feels are present as the series ramps up the drama. The dialogue by Allison is honest and funny, the interactions between Susan, Daisy and Esther seem deceptively simple because they are so well written. I really can’t recommend Giant Days highly enough, it’s in my top five current comics. Which by the way consists of The Spire, Squirrel Girl, Batgirl, Gotham Academy.

I may be biased in my adoration of Giant Days, I went to two Universities in England and experienced dorm living first hand; this comic speaks to me of a strange time in my life. London is no place for the timid and to this day I’m not sure how I survived three years there. Giant Days is an emotional ride with lovable flawed characters, it’s great to look at thanks to Lissa’s artwork and it’s funny throughout.