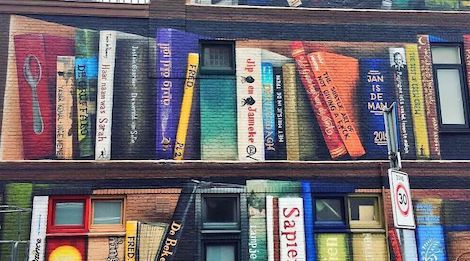 Since the mural has been unveiled it has become not only an artistic source to bring the neighbors together but for people stopping to visit for a literary selfie.  “The neighborhood where this work was made is filled with different cultures. And I’ve noticed that this project brought (and hopefully for as long as it lasts) people together without pushing it. They meet each other through books. Regardless of the differences in cultures, regardless of the differences in political point of views. Regardless of being extreme right or extreme left.”

Every blank wall, a bookshelf mural. This is cool!

It sounds like something from Carlos Ruiz Zafón’s The Shadow of the Wind and his The Cemetery of Forgotten Books: a huge volume containing thousands of summaries of books from 500 years ago, many of which no longer exist. But the real deal has been found in Copenhagen, where it has lain untouched for more than 350 years.

The Libro de los Epítomes manuscript, which is more than a foot thick, contains more than 2,000 pages and summaries from the library of Hernando Colón, the illegitimate son of Christopher Columbus who made it his life’s work to create the biggest library the world had ever known in the early part of the 16th century. Running to around 15,000 volumes, the library was put together during Colón’s extensive travels. Today, only around a quarter of the books in the collection survive and have been housed in Seville Cathedral since 1552.

Ambitious doesn’t begin to describe Carla Hayden’s plan to make the Library of Congress’ collection available to the world. Audacious may be closer to it.

Hayden, the 14th person to steward the Library, wants to “throw open the treasure chest” by digitizing its vast collection and making it accessible online. The five-year plan’s understated name — Enriching the Library Experience — doesn’t capture its scope. Hayden wants people to engage with everything from the letters of Abraham Lincoln to early-edition Batman comics.

This would be incredible.