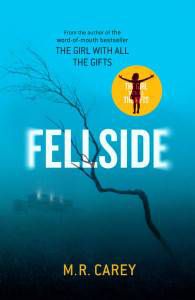 Fellside, the new novel by M.R. Carey, is the story of a beaten-down young woman who wakes up with a wrecked body, a wrecked memory, on trial, and hated for an appalling crime she can’t recall. She’s going to be stuck inside Fellside, a gigantic women’s prison, a brutal place she’s not prepared for. Maybe more alarming, though, is the ghost of a little boy who is visiting and whispering to her, and whom she recognizes, to her horror.

I read the book in a couple of days, and I read most of the second half late at night, pacing around, too involved (and kind of stressed) to put it down. I was absolutely nuts about it. So when I got the chance to interview Carey, I was enthused. I should  be allowed to pester every author of every excellent book I enjoy.

I suppose the first thing I’ve got to touch on is how much Fellside reminded me of Orange is the New Black, but with added supernatural elements. The two works become unrelated pretty quick, but was this a concern for you at all?

Not really. I’ve seen the first series of OITNB, and part of the second. I’m a huge fan, but I was confident going in that I wasn’t going to intrude much on that territory. Certainly Jess is no Piper, and there’s nothing in Fellside that corresponds to Piper’s main dilemma. Piper has to strike a balance between the life she used to live and the life she’s living now. Jess has literally torched her former life. There’s nothing left. Fellside is the whole deal for her now, and going forward.

In a more general sense I’m not worried about people tracing my influences. I don’t believe OITNB was one, but every story is inhabited by other stories and writers don’t always know themselves what they’re stealing and misappropriating. I know for a fact that I was influenced by British and European prison dramas and narratives. It might sound bizarre, but the classic sit-com Porridge is in the mix there somewhere. Harriet Grace is named for genial Harry Grout, who was played by the great British character actor Peter Vaughan. I can’t explain the connection, but it’s there.

Jess is her own worst enemy, for almost all of the book. How did you approach writing someone who remains as passive as she is for so long, without making her too passive to hold reader interest?

It was a balancing act, definitely. Making Jess relatable at all was hard, given where we first find her and what she has done. I played with time a lot, allowing us to see earlier periods in her life when she was different. More obviously admirable. I think by the time you get to the end of the book you can see that she is a pretty extraordinary person, but addiction squashes you flat. I had to insert some hints very early on that there was another version of Jess hidden underneath the addiction, partially erased but not completely destroyed.

The decision to show her previous relationship with Alex in flashback was pretty crucial, I think. Early drafts didn’t have that, so you were having to judge Jess for a long time just on the basis of where she is now. The flashbacks make you keep a more open mind, maybe.

The story of Alex, the little boy, ranked up there with my favorite ghost story, The Devil’s Backbone, by the time the book was done. There were similar questions of revenge, memory, personal identity, and I loved it. Without giving much away, I was hoping you could talk about where the idea for him came from, and how difficult it might have been to weave a ghost into an otherwise dark and very realistic novel?

That comparison gives me huge pleasure, so thanks! Coming back to that earlier point about not always knowing who your own influences are, I’m very much aware of Guillermo del Toro’s movies as items in my mental furniture. The Devil’s Backbone rocked my world when I first saw it, as did both Pan’s Labyrinth and The Orphanage (I know he was only exec producer on that but it has his DNA in it all the same).

Alex grew out of Jess, to begin with. This was always going to be a story about addiction and what addiction does to you, so from the start I was thinking: well, what’s the worst thing you could possibly do when you were high, the thing for which you’d be least likely ever to forgive yourself? Causing the death of a child seemed to be a compelling answer. And if she actually knew and liked the child, that would be another twist of the knife. I started to create Alex in my mind out of these very minimal components.

I was entirely comfortable with bringing a ghost into an otherwise realistic prison drama. I know it’s a risk in the sense of upsetting genre conventions, but that brings its own rewards. Your narrative space expands. You can set up expectations and then veer off in a completely different direction. You’re only beholden to your characters and your sense of them, not to the unwritten rules of how other prison stories have tended to work.

There are a lot of plots in the book, and every single character eventually winds up with a complex (and interweaving) backstory. Just so much stuff. How did you keep track of it all? Serial killer-esque display on the wall with string going across it?

I wish I was that organised! I actually do it by means of a lot of to-ing and fro-ing. I usually work up a very detailed plan before I start to write, but like all plans it only holds for the first few minutes of the actual work. Then the story starts to mutate as you live with the characters and work them out more fully in your head. The plan is still useful, though. It’s there as a kind of reference point for where you are in the landscape of the story. You can default back to it, and you do – so that gives you more confidence when you strike out into uncharted territory.

But characters like Salazar and Stock, Shannon McBride, Scratchmore and even Devlin grew quite organically as I was writing. And because you live with a novel for such a long time I was able to go back and re-work their early scenes as I got a better sense of where they were going. Stock was actually the narrator in draft one, and McBride wasn’t a character at all. Salazar had a much smaller role, very different from the tragic arc he ended up with. The constant was Jess’s duel with Grace, and the backstory of Naz’s death that underpins it.

I wanted to ask about research, because it’s always fascinating to me. A ghost can be made up, but everything else seemed hyper-detailed and exhaustively researched. What did you research before and during the writing, and how huge a process did that turn out to be?

It’s difficult for me to explain this part of the process, because it’s sort of ongoing. There were a lot of different layers, really. I was a court clerk for a while back in my early twenties and I did a fair number of prison visits then. Obviously I saw those prisons as an outsider sees them, just the visiting suites and reception areas, but they made a powerful impression on me. And I started to see how different they could be as institutions, and what a difference that could make to the lives and future prospects of the inmates.

When I was writing I fell back on those old impressions a lot but also read a lot of scholarly articles about the British prison system (which is in crisis) and accounts by former prisoners of their lives inside. More recently I’ve been talking to inmates and experts who run drug rehab programs in prisons, and to people in the local authority services who support them. Some of that research fed into the novel,  some into the movie adaptation that I was working on alongside the novel, and some didn’t get used at all because I couldn’t find a way to fictionalise it without leaving a trail back to some real people.

Most of the stuff about addiction comes from personal experience. Not my own, but the experience of people I’ve known and been very close to.

So I tried to get the details right, but there are still some fairly big misrepresentations in Fellside. Some of them are a matter of nuance. There are a lot of very violent and dangerous women in Goodall block, which is more or less what you’d expect. But in real life the vast majority of the inmates would be more like Shannon McBride or Naseem Suresh – women whose involvement with the justice system has been a slo-mo train wreck, and who might never have ended up in jail if various civil authorities hadn’t let them down badly along the way. I exaggerated the size of the female prison estate too: if Fellside really existed and if it was as big as the novel suggests, it would house pretty much every female convict in mainland Britain.

I hope, in spite of these things, there are truths to be found in the story. And I hope one of the ways it leaves readers feeling is angry. Various of our home secretaries on both sides of the political divide have repeated the mantra that “prison works.” In the vast majority of cases it doesn’t. It shatters lives, sabotages relationships and family support networks, embeds addiction and mental illness, and generally makes re-offending infinitely more likely. The doubling of the UK prison population in the two decades just past is a national disgrace. It makes me want to lock up every politician in Westminster for a mandatory twelve-stretch, just to see if that improves their ability to empathise.

Finally, I’m always curious about where people write, and what their work habits are like. Do you have a particular place or setup you like to work with? And do you regiment your writing time, or just grab as much as possible, when possible?

I do have a place in which I work, although it’s not much of a place. It’s a room at the back of my house that used to be a garden shed but then was joined to the rest of the house by means of a very narrow passage along the edge of the property line. It’s too hot in summer and too cold for the other fifty weeks of the year (British summers are short). So there’s nothing I can do there but work, and in that sense it has made me very productive.

As far as my working habits go, I start early and finish late – but I’m hugely prone to distraction. If you subtract the “Ooh, squirrel!” moments, you’re probably not left with a very impressive total. Back when I was a teacher I had a colleague, Sharon, who told me once that the word she thought of when she watched me working was entropy. I asked her what she meant, and she said “a huge amount of energy boiling away into a vacuum.” It’s still a very fair description.