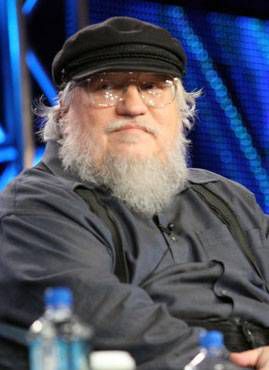 With the new season of Game of Thrones about to hit television screens everywhere, we thought it would be nice to get a little glimpse into the life of the man that wrote all those wonderful (and less-than-wonderful) characters. Below you can get a look into the evolution of Mr. Martin as a writer, in his own words.

On when he started writing, as a kid:

“The first stories I remember finishing were written on pages torn from my school tablets. They were scary stories about a monster hunter, and I sold them to the other kids in my building for a penny a page.”

On the first time his words appeared in print:

“The first words of mine ever to appear in print were ‘Dear Stan and Jack’ They appeared in Fantastic Four #20, dated August 1963, in the letter column. My letter of comment was insightful, intelligent, analytical – the main thrust of it was that Shakespeare had better move over now that Stan Lee had arrived.”

Martin loves superheroes and monster and comics, and he tried his hand at writing them once

“My first stories [written for comic fanzines] starred a superhero come to Earth from outer space, like Superman. Unlike Superman, however, my guy did not have a super physique. In fact, he had no physique at all, since he lacked a body. He was a brain in a goldfish bowl.”

On the inevitable rejection letter:

“The first rejection letter I ever received … was from Erik J. Friis, editor of the American-Scandinavian Review, who regretted “very much” having to return “The Fortress” to me. “It is a very good article” he wrote in a letter dated June 14th 1968, “but unfortunately too long for our purposes”.

Seldom has a writer been so thrilled by a rejection. A real editor had seen one of my stories, and liked it well enough to send a letter instead of a rejection slip.”

On putting a part of yourself into your stories:

“[‘The Second Kind of Loneliness’] was the first story I ever wrote that truly left me feeling vulnerable, the first story that made me ask myself, ‘Do I really want to let people read this?’ “

The quotes above are all taken from Dreamsongs, which is a wonderful collection of his work, interspersed with chapters about his journey to becoming a writer. It also has interesting anecdotes on how he got to where he is now; his runaway success with what started out as a small story about a boy who went to see a man beheaded, and ended up as A Song of Ice and Fire, better known perhaps as A Game of Thrones.

Extra quote, as a reward for those who read all of the above.

George Martin worked for a while writing for the tv show Beauty and the Beast. And he then got started on another show called Doorways, for which a pilot was made but nothing came of it.

“Doorways will always be the great ‘what if’ of my career. … I might still be writing and producing the show today, or I might have been fired two months into the series. The only certainty is that I would be much, much richer than I am  at present.

On the other hand, I would never have finished A Game of Thrones, or written the other volumes of A Song of Ice and Fire. So maybe it all turned out for the best after all.”