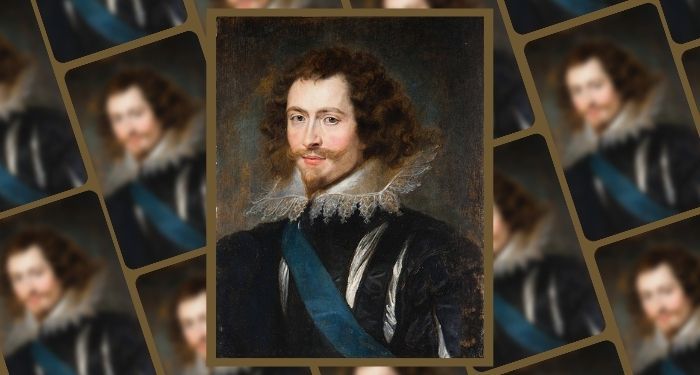 Who was George Villiers? Here’s the short answer: George Villiers was an extremely messy likely bisexual in 17th century England who at minimum had love affairs with one English king (for real) and one French queen (probably only in fiction), and at maximum fucked absolutely everyone in Europe. (The actual truth is most likely somewhere in between.) He was also a duke, and has appeared in a rather significant amount of literature.

“I feel that James I, who fell madly in love with a very fit and exceptionally dim knight at a tilting match and immediately made him a gentleman of the bedchamber (a real title), would take mercy upon my particular plight.”

Guess who that gentleman of the bedchamber was. Go on, guess. Did you guess George Villiers? GOLD STAR FOR YOU! So here’s the story: James I, formerly known as James VI of Scotland (when Elizabeth I died, he became king of not just Scotland but also England and Ireland, and was the first James of this newly united…kingdom), met 21-year-old George Villiers in 1614 and fell absolutely, positively, head-over-heels in love with him. By all accounts. Even the ones that refer to them as “friends” are pretty clear that they were close friends. If you know what I mean. (I mean they were doing it.)

George was not James’s first favorite, but he would be his last, as their friendship lasted the rest of James’s life. But back to their meeting. James’s advisors did not like Robert Carr, the king’s favorite at the time that he met Villiers, and they saw an opportunity in handsome young George. They encouraged James to transfer his affections to Villiers, raising money to improve George’s wardrobe in an attempt to make him more suitable and promoting his appointment as royal cup bearer (another totally real title). They were successful. Obviously.

“Actually … you remember how I told you about the gay king, James I?”
“The one with the dumb jock boyfriend?”
“Yes, that one. Well, his most beloved favorite was a man named George Villiers. ‘The handsomest-bodied man in all of England,’ they called him. James was completely besotted. Everyone knew. This French poet, de Viau, wrote a poem about it.” He clears his throat and starts to recite: “‘One man fucks Monsieur le Grand, another fucks the Comte de Tonnerre, and it is well known that the King of England, fucks the Duke of Buckingham.’” Alex must be staring, because he adds, “Well, it rhymes in French. Anyway. Did you know the reason the King James translation of the Bible exists is because the Church of England was so displeased with James for flaunting his relationship with Villiers that he had the translation commissioned to appease them?”
“You’re kidding.”
“He stood in front of the Privy Council and said, ‘Christ had John, and I have George.’”

I looked it up, and every word of this is true except, alas, the Bible trivia — the King James Version was commissioned ten years before James I met George Villiers, and completed three years before they met.  (Also George was technically not a knight, but I think we should let that slide since he became one later, kind of.) The most important part, in my opinion, other than the (real) poem, are the direct quotes from James himself (re: Jesus) and from, it turns out, Godfrey Goodman, Bishop of Gloucester (re: handsomest-bodied).

A short list of titles George held, appointed by his bestie James: Royal Cup-bearer; Gentleman of the Bedchamber; Master of the Horse; Baron Whaddon, Viscount Villiers; Knight of the Garter; Earl; Marquess; Lord High Admiral of England; and, finally, Duke (the only one at the time who was not royalty by blood). Yes, really. All of those are real.

But what about the French queen I mentioned?

“[Aramis] only waits for one thing to determine him to resume his cassock, which hangs behind his uniform,” said another Musketeer.
“What is he waiting for?” asked another.
“Only till the queen has given an heir to the crown of France.”
“No jesting upon that subject, gentlemen,” said Porthos; “thank God the queen is still of an age to give one!”
“They say that Monsieur de Buckingham is in France,” replied Aramis, with a significant smile which gave to this sentence, apparently so simple, a tolerably scandalous meaning.

Okay, SO. Louis XIII of France married Anne of Austria (who was actually Spanish) in 1615, when they were both 14 years old. It is believed that the marriage was not consummated until several years later, after Louis overthrew his own mother, who had been acting as queen. Anne suffered several miscarriages and stillbirths before finally giving birth to Louis XIV in 1638, when she was 37 years old. In the interim, there was so much intrigue.

Cardinal Richelieu became King Louis’s advisor in 1624, and he encouraged Louis to go to war with Spain, which was not great for Anne. Richelieu encouraged Louis to suspect his wife of everything from infidelity to spying, and Louis had several spies follow Anne, who corresponded illegally with her Spanish brother and was eventually caught when Richelieu launched an investigation. There also may or may not have been a conspiracy involving a plan for Anne to marry the king’s brother Gaston after he murdered Louis (which he did not do and which she denied knowledge of).

Anne probably did not do most of the things she was accused of, but we’ll likely never know for sure.

In 1843, Alexandre Dumas decided to add one teeny tiny additional accusation: he wrote of an illicit affair between Anne and Buckingham, AKA George Villiers. While it is documented that Villiers was one of Anne’s admirers before her marriage to Louis, there is no evidence whatsoever that I can find that they knew each other later, let alone that she gave him her precious diamond necklace, as in the book. In fact, that diamond necklace is probably an invention of Dumas’s based on the Affair of the Diamond Necklace several Louises later, when Jeanne de la Motte catfished Cardinal de Rohan and some jewelers into thinking Marie Antoinette, wife of Louis XVI, was commissioning a very expensive, hideously ugly necklace.

After the publication of The Three Musketeers, Villiers appeared in romantic roles in an assortment of books including: Wife to Great Buckingham by Hilda Lewis; Charles, The King by Evelyn Anthony; Earthly Joys by Philippa Gregory. Other than Dumas, it seems that most of the authors who use Villiers as a character are white.

And, of course, he is referenced in the 19th century classic work of bi erasure, the nursery rhyme “Georgie Porgie.”

Kissed the girls and made them cry,

When the boys came out to play