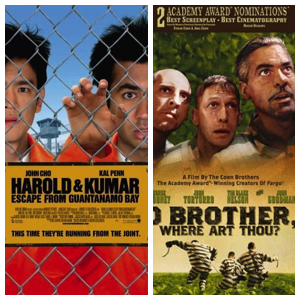 O Brother, Where Art Thou? and Harold and Kumar Escape from Guantanamo Bay, two movies that seemingly have very little in common. Scratch on the surface and you will find that they spring from the same source of inspiration: Homer’s The Odyssey.

Arguably one of the most influential literary works of all time, The Odyssey is an epic poem attributed to the poet Homer, who lived in Ancient Greece during the ninth or eighth century B.C.E. Little is known about Homer other than that his name has been associated with The Odyssey and The Iliad, since at least the seventh century B.C.E.

O Brother, Where Art Thou? (2000) is a movie by Joel and Ethan Coen that follows three unlikely heroes, Ulysses Everett McGill (George Clooney), Pete Hogwallop (John Turturro), and Delmar O’Donnell (Tim Blake Nelson), on their journey through the state of Mississippi in 1937.

In O Brother and Harold and Kumar I have identified four main plot points that the two movies share with Homer’s poem.

The Odyssey. On his way home to Ithaca from fighting in the Trojan War, Ulysses is shipwrecked. The goddess Calypso saves him and brings him to her island where she makes him her prisoner. After many years, Calypso finally sets Ulysses free. However, to make it off the island he is forced to build himself a raft since Calypso doesn’t own any ships. When Ulysses has finished his raft he sets sail for home.

O Brother. Everett, Pete, and Delmar are chained together in a chain gang at the Mississippi State Penitentiary, also known as Parchman Farm. The movie begins with the three men escaping through a cornfield.

Harold and Kumar. On their way to Amsterdam, Harold and Kumar are mistaken for terrorists and end up in prison at Guantanamo Bay in Cuba. They manage to escape, but they have no boat to take them off the island. By chance, they run into a group of Cubans headed for Florida. Harold and Kumar join them on their raft and return home to the United States.

The Odyssey. When Ulysses doesn’t return home from Troy, he is assumed dead and his wife, Penelope, a widow. A group of young men, collectively known as The Suitors, move into the house to compete for Penelope’s hand in marriage. After being released from Calypso, Ulysses hurries home to prevent his wife from marrying one of The Suitors.

O Brother. While at Parchman, Everett receives a letter from his wife Penny (Holly Hunter) that she has a new beau whom she intends to marry. When Everett catches up with Penny to try and stop the wedding from taking place, his daughters refer to their mother’s new boyfriend as “a suitor.”

Harold and Kumar. Back in the United States, Harold and Kumar head to Texas to find their friend Graham Colton, who has connections to the highest levels of the government. Colton is also the fiancé of Kumar’s ex-girlfriend, Vanessa (Danneel Harris). While Harold travels to Texas with the intention of clearing their names, Kumar is intent on stopping the wedding of Vanessa and Colton.

The Odyssey. On their way from Troy, Ulysses and his men arrive at the island of the Cyclopes, who are one-eyed giants. While exploring, they end up in a cave that belongs to the Cyclops Polyphemus. Polyphemus imprisons them and proceeds to kill some of them for food. Ulysses and the remaining men destroy Polyphemus’ only eye and escape.

O Brother. The Cyclops in O Brother is a Bible salesman named Big Dan Teague. Instead of killing our heroes, Big Dan assaults them with a bat and tries to rob them. The one to walk away from this scene unharmed is the Cyclops.

Harold and Kumar. The Cyclops in Harold and Kumar is a little boy called Cyrus, the son of married siblings, Raymus and Raylene. Harold and Kumar stay the night at their house, but escape after Harold wakes up to find Cyrus in his bed. As they run through the forest, Kumar asks Harold why they had to leave. Harold replies that the Cyclops tried to bite him.

The Odyssey. Still on their way home from Troy, Ulysses and his men sail past the island of the Sirens, whose enchanting song has been the ruin of many sailors. Curious to hear them sing, Ulysses tells his men to tie him to the ship’s mast so that he can safely listen to them. Meanwhile, the crew stuff their ears with beeswax to block out all sounds. Because they have taken these precautions, Ulysses and his men pass the island of the Sirens unharmed.

O Brother. Driving down the road, Pete catches the sound of an enchanting song. Everett pulls over and they encounter three women who Delmar refers to as “Sirens.” With song and moonshine, the Sirens seduce the three men, who completely fall under their spell.

Harold and Kumar. Together with Neil Patrick Harris (as himself), they end up at Madame Sally’s Foxhole. However, caught up in their own emotional misery, neither Harold nor Kumar respond to the women’s attempts to seduce them.

Placed side by side, the similarities between the two movies and the poem become evident. It’s no secret that O Brother is inspired by The Odyssey. The opening credits both quote the poem and name it as the movie’s source of inspiration. The motor of the movie’s plot is the relationship between Ulysses Everett McGill and Penny McGill. And the Coen Brothers themselves refer to the movie as The Odyssey meets The Three Stooges.

As to Harold and Kumar, neither Hurwitz nor Schlossberg have mentioned The Odyssey as a source of inspiration. Instead, they name family and friends, the Farelly Brothers, and MILF-guy #2 in American Pie (1999). However, when going through the four plot points, Harold and Kumar comes across as a closer retelling of The Odyssey than O Brother. Whether or not that is a coincidence is a question that only Hurwitz and Schlossberg can answer.