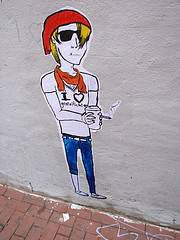 I was recently discussing mystery books with a friend, and each of us was throwing out names of authors who tend to write formulaic books (e.g., Agatha Christie, Carolyn Hart, Robert B. Parker) versus those whose novels take a more complicated approach (e.g., P.D. James, Ian Rankin, Val McDermid). We started talking about some other genres, and some other authors in those genres whom we admire: China Mieville in scifi, A.S. King in YA, and in romance…

Neither of us could think of a “romance author” that we’d put in the same camp as Rankin or Mieville or James. “I just don’t read romance,” said my friend. “I’m not interested in those silly plots.” I was about to snicker and agree, visions of airbrushed Fabios wafting through my head (not my type, alas), but I was brought up short by my intellect. “That’s not true at all,” I replied. “We all read romances. Really well-written romance novels are what we consider commercial and sometimes even literary fiction!”

Somewhere in the ether, Sarah Wendell from Smart Bitches, Trashy Books is snickering more loudly at that naive pronouncement than I could have at the notion of “not reading romance.” She and other romance experts (who, by the way, include many a PhD in literature) have long recognized that the “novels” earnestly discussed today by hipsters in horn rims grew out of a tradition that was long scoffed at as “women’s writing.” Frances Burney, who influenced that modern pet Jane Austen, had her books derided as a “feminine sensibility.” As this Salon piece by Rebecca Harding pointed out in 2010, many of the best-selling books written by men might be labeled “women’s fiction” if their authors had female names: Think of Chris Cleave’s Little Bee or even The Girl with the Dragon Tattoo. (Would we be struck by Lisbeth Salander in the same way if her creator had a uterus? Discuss.)

It seems to me that, much as an urban neighborhood both improves and loses character after the developers set about gentrifying things, the path of “romance” to “novel” has had advantages and disadvantages–and some of this, I swear, is men’s fault. No one told detective-story scribblers that their work was too domestic (an arena long criticized by “real writers”), or fantasists that sterner purpose should be found–at least not in public. Those genre writers may have been marginalized (“pulp fiction” is not a compliment), but neither were they siloed simply due to their chromosomes.

It also seems to me that any work of fiction that includes a love story is…a romance, au fond (and sometimes there’s more fond, sometimes less–we don’t have time or space to discuss erotica here!). The real distinctions of tragedy and comedy are more useful in determining the sort of book you might like to read than the false dichotomy of “romance novels” and “literary fiction.” Yes, some of the former are formulaic, even flat.

But are you telling me you can’t say the same of the latter?