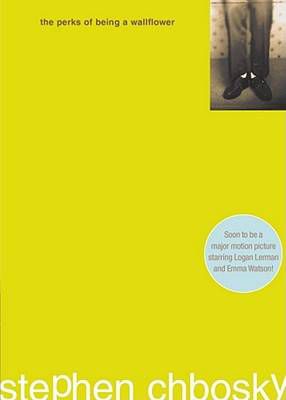 Where it all began...

I always thought my adolescent infatuation with The Perks of Being a Wallflower would fade as I, you know, stopped being an adolescent, but the shine hasn’t ever worn off. I break out in hives at the thought of having to read a teenage girl coming-of-age story–living through it was enough the first time, thankyouverymuch–but I can’t get enough of the ones about dudes. Now that I’ve survived all the female adolescent milestones (with a lot of help from Judy Blume), it’s fun and interesting to see them from the other side.

Here are a few recent favorites that have given me a reason to poke at my husband, ask “Was it really like that?” and make some silent apologies to the teenage boys I so totally didn’t understand back in the day. Added bonus: all three ooze crossover appeal for YA readers!

The House of Tomorrow by Peter Bognanni

Sebastian Prendergrast is sixteen years old and lives with his grandmother in a geodesic dome in central Iowa. Sheltered kid syndrome? He’s got it in droves. Sebastian rarely makes it out of the house, er, dome, and then only to run errands into town for his Nana. He has no teenage friends, limited access to technology, knows next to nothing about sex, and is only vaguely aware of the fact that he should be undergoing some MAJOR changes both physically and emotionally. You know those kids who are both unsettlingly adult and worryingly stunted? That’s Sebastian.

When Nana has a stroke, she has the courtesy to do it while there are visitors touring the dome (I mean, it’s totally normal for your home to be a tourist attract, right?), and Sebastian finds himself hurtled outside the world of the dome and into an unlikely friendship with sulking, skinny jean and black t-shirt-wearing, punk rock-obsessed Jared Whitcomb. Bognanni makes the outlandish setup completely believable, and Sebastian’s discovery of music, rebellion, bad language, and girls–and, of course, his identity–through his friendship with Jared crackles with authenticity. This terrific take on the teenage identity crisis is filled with humor, irony, awkwardness, and–most important–great sympathy for the characters and for the wonderful, horrible job of growing up.

Miss Entropia and the Adam Bomb by George Rabasa

Fourteen-year-old Adam Webb’s family really puts the “fun” in dysfunctional. It’sThanksgiving Day, and they have had it with him. Again. When the van from the Institute Loiseaux–Minnesota’s loony bin for trust fund kids–pulls up to cart him off for another round of treatment, Adam decides to take matters into his own hands. At the next stop, he hijacks the van and runs off with his fellow prisoner patient Francine Haggard, who goes by Miss Entropia.

Because grand theft auto isn’t exciting enough by itself, the pair steal a few things, lose a few others (marbles, their virginity, etc.), and fall straight into l-o-v-e. They are, of course, found out,  and Adam is returned to the ‘Tute, where he commences to search for the runaway Pia so they can begin the rest of their lives together. At once a laugh-out-loud caper and poignant examination of the insanity of adolescence, this book is equally perfect for outcast kids and adults who have forgotten what it feels like to be a teenager. And okay, it doesn’t *quite* fit the “with punk music” designation, but you can’t argue that Miss Entropia and the Adam Bomb isn’t a great name for a band.

All Neil Barton really wants is to survive his freshman year, hang out with his best friend, and be left alone with the latest book in his favorite series The Adventures of Apathea Ravenchilde. When activists in his hometown Americus, Oklahoma try to ban the series from the local library  (on the grounds that it, a work of fantasy, promotes witchcraft, satanism, and sinful behavior, natch), it looks like Neil will be thwarted on all three counts. His best friend–whose mother is leading the anti-Apathea charge–gets sent to military school, he gets bullied, and he can’t believe that other kids in Americus might be denied the opportunity to read and love the books that have made the ordeal of adolescence more bearable for him.

As he journeys beyond his (very narrow) comfort zone, making new friends and stepping up to fight the ban, Neil is introduced to punk music (yes!), gets a job at the local library (double yes!), and gins up the courage to speak out against censorship (all the yesses!). Reed and Hill nail the experience of growing up in a conservative midwestern town and inject their already awesome graphic novel with illustrated excerpts from the Apathea Ravenchilde series. I can’t recommend this book enough. And that? It makes me feel infinite.