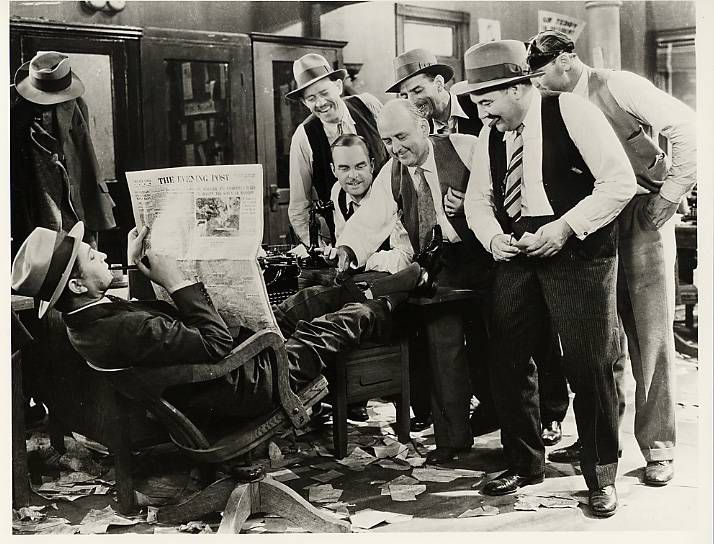 I’ll admit this weakness is completely narcissistic – and a fantasy. I’m a sucker for books that both reflect my former trade (I was a news hound for nine years) in all its pomp, pretension and amphetamine-pace and allows my mind to race into places this profession could have taken me, but–thanks to my desire to maintain relationships, innate cowardice, love of a functioning liver, and position as arts correspondent–never did.

Journalists are obvious protagonists for writers. Second only to cops, it is their job to get into the thick of the action, to continually uncover and understand. And drink. Their job gives an excuse for and levity to tracts of exposition. And say what you like about tabloid hacks and gossip mongers, they are an inherently literary breed. Compare the number of great journalism films (All The President’s Men and, er, that’s it) with books, and it’s clear what the profession’s natural medium is.

Plus, almost without fail, journalists are represented as being lousy human beings. It’s a solitary job. A newsroom is populated by lone wolves. They can sum up the grand themes of our times, but struggle with the minutia of daily life. This is paradoxical gold for writers. And for readers like me.

And without further ado, here are a few select books that tickle the genre part of my brain:

A Visit From The Goon Squad – Jennifer Egan

Featuring Jules Jones, screwed-up celebrity journalist. Yes it’s mainly about the music industry, but for anyone who has ever been forced to interview a teenage starlet, the chapter with recently-dumped writer Jules and actress Kitty Jackson is uncomfortable in ways beyond the eventual assault. Trying to mine something unique and engaging from interviewing a celebrity is usually like trying to find poetry in an Egg McMuffin. When midway through an interview dotted with puffery, the crumpled Jules wearily drops his head in his hands and moans ‘It’s all such a farce’, a legion of journalists weep in recognition.

All The Colours Of The Town – Liam McIlvanney

Featuring Gerry Conway, screwed-up political journalist. The narcissism is cranked to 11 with this choice. It is based on my old workplace in Glasgow. So its references echo all the louder, whilst simultaneously making me think, ‘it was never like that.’ Conway is divorced, has a burgeoning drink problem, and has a photo of one of Scotland’s top politicians with some of Northern Ireland’s nastiest terrorists. It’s realistic enough in that Conway gets beaten up a lot (journalists are a weedy bunch), misses his deadlines (they are lazy too), and doesn’t get the girl (it’s a anti-social trade). But it is a neat introduction to the grubby, incestuous world of Scottish politics and the media.

The Girl With The Dragon Tattoo – Stieg Larsson

Featuring Mikael Blomkvist, screwed-up super journalist. We all know this one. It’s journalism as imagined by a 14-year-old boy: every woman in Sweden wants to sleep with you, massive corporations crumble at the beck of your opening paragraph, you look like James Bond, and Nazi conspiracies are around every corner. It’s uncanny how similar this was to covering the arts in Scotland.

Featuring Quoyle, screwed-up harbour journalist. The yin to Blomkvist’s yang. This is journalism as imagined by an actual Newfoundland car accident correspondent: it’s tedious, you look like Kevin Spacey, and people only care about what you write if it involves death on icy roads. But Proulx also imbues this battered profession with a warmth worthy of one of Quoyle’s hand-knitted sweaters.

Edd McCracken lives in Scotland, works for an ancient university, and writes about culture for fun. Follow him on Twitter:  @EddMcCracken.