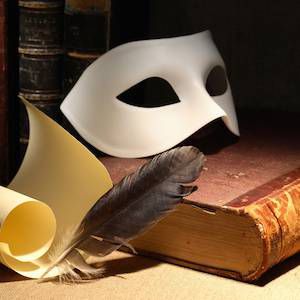 Once upon a time, I spent most of my waking hours researching and writing about opera in turn-of-the-20th-century American literature for…you know…reasons. Anyway, I found a surprising number of novels from this period that included opera scenes or focused on the lives of opera singers. Actually, it shouldn’t have been too surprising because during the last third of the 19th century, people went kinda cu-RAZY for the operas of Charles Gounod and Richard Wagner. They packed the opera houses night after night cause for some reason they didn’t feel like listening to these performances on their iPods?? Whatever…

But really, 1870-1920 is the most interesting time period, in my humble opinion. And the writers of the time capitalized on that. Trust me, these novels that are all about opera are some of the funkiest and most fascinating you’ll ever pick up. So look, I’m gonna give you a list of some of ’em (if you reeeeally want more, though, just hit me up).

This one goes out to all my opera homies and anyone interested in cool, old, crazy novels. Enjoy:

Phases of an Inferior Planet by (1898) by Ellen Glasgow

You may know Glasgow better for her post-bellum Southern fiction, but Phases is a totally different animal. It focuses on the intense and complicated relationship between an aspiring opera singer and a Darwinian scientist. Glasgow explores (and critiques) the seemingly clear divide between the search for universal, scientific truths and the striving toward beauty and religious ecstasy. Both the scientist and the opera singer, Glasgow suggests, are chasing after some sort of spiritual fulfillment, although they would never admit this to themselves or each other. And yet they each strive to connect with something larger than themselves, to find a purpose in life. Glasgow makes fascinating connections here among art, science, and religion, using opera performances to weave them together.

You’re like, wait, are we talking about the dude who wrote The Jungle? Yes, indeedy. This odd, early work by Sinclair is an example of his interest in “romantic idealism” and the works of Wagner (still in vogue at the time in the U.S.). A poet happening to play a theme from Wagner’s Ring cycle on his violin one day is suddenly transported into that fictional world. What follows is a funky collision between operatic artistry and real-world American capitalism, all part of Sinclair’s movement toward his embrace of a socialistic philosophy. I know- wut.

Frank Norris was all about the opera, bein’ all cultured and everything and having spent a lot of time in Paris supposedly training as a painter but mostly going to the opera with his rowdy fellow artists. But I digress. The Pit, the second book in a projected trilogy, contrasts stock market speculation and the world of art and culture, where the former threatens to swallow up and digest the latter (and destroy a marriage in the process). One of the most important scenes in the book takes place in the beginning: a performance of Charles Gounod’s Faust, whose themes set up our expectations for the novel itself. Norris’s careful description of the performance and audience reaction is fascinating and reveals his deep interest in the power of the human voice and its influence over those who hear it. (This scene was recycled from an earlier Norris novel, Vandover and the Brute, because apparently if you exist in a Norris novel you must attend the opera).

I read Soprano a very long time ago, and haven’t yet gotten around to the other two books in the trilogy, but Crawford certainly knew his stuff, having grown up in Italy and attempted to become a tenor himself (didn’t pan out). The trilogy as a whole follows the career of a talented soprano as she navigates the tricky waters of opera politics and ambitions. Crawford was a bestselling author in his day and he cranked out novels like I put away chocolate (i.e. non-stop). Plus who doesn’t love a good trilogy?!

Tower of Ivory (1910) by Gertrude Atherton

Three words here: OVER. THE TOP. Nonetheless, Atherton was one of the most popular novelists of her day, especially when she was writing about the surge in aristocratic marriages between rich American girls and titled English dudes (apparently it was the thing at the turn of the century). Anyway, Tower of Ivory shows us what happens when an American-born opera singer (specializing in Wagner) and a shiftless English aristocrat fall in love. Of course, the relationship is doomed from the start, since the dude needs to marry money and the opera singer must give all to her art if she wishes to retain her artistic prowess. Lots of yelling at the stars and flinging oneself around and declarations of undying love yada yada yada but a really good yarn.

We all know and love Willa Cather, so you can rest assured that Song of the Lark is a brilliant and beautiful book. It follows a young Midwestern girl of immigrant parents as she prepares for a musical career- at first, in piano. Only after she tries to go pro does her teacher figure out that her true calling is opera. As in her other novels, Cather lingers patiently and lovingly on the details of her main character’s life and influences. The Midwestern landscape and diversity of immigrant settlers help Thea define the kind of musician she wishes to be. Cather wrote often about music and opera, and Song of the Lark is one of her masterpieces.

I’ve confined myself to early-20th century novels here, but feel free to suggest earlier or later books that focus on opera! I did read Ann Patchett’s Bel Canto several years ago, and thoroughly enjoyed it. Any others you’d suggest?