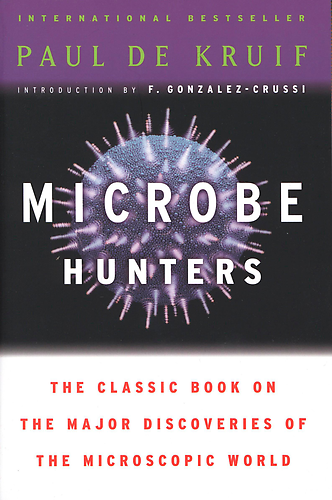 This guest installment comes Alexandra Jacunski, a graduate student in Pharmacology at The University of Toronto. She also blogs about her studies, science, and science-related books at Exercises in Auxology.

A book I read in the third grade, The Measly Middle Ages, began my slightly morbid obsession with illness. It described the bubonic plague from a perspective that fascinated me: nobody at the time knew what was killing them, how it was doing so, or how to protect themselves from this invisible monster.

A “problem” I had when  starting my  own academic path in the biological sciences was that everyone is so darn specialized. I know that I will be expected to focus on one disease, one microbe, or one mechanism when I settle into research – but there’s just so much to know about everything else. As Professor Farnsworth of Futurama put it, “Indeed, the pursuit of knowledge is hopeless and eternal – yay!” How can I learn more about the study of human illness without spending my entire life in grad school?

Enter my genre kryptonite: books about science that aren’t written just for scientists. They’re chock full of information presented in a way that’s easy to absorb – often a must for me after 12 hours at a lab bench. They also all address a fascinating and important issue of our time:  our society is, for the most part, scientifically undereducated in a world that is becoming more scientific in its nature. And finally – and most importantly – they all tell unforgettable stories.

One of the first books I read in this genre was The Cutter Incident. Written by Dr. Paul Offit, it recounts the hunt for, and first production of, the polio vaccine. The book isn’t fascinating just because it reads like a modern thriller; Dr. Offit goes beyond describing The Cutter Incident itself, where mistakes made by many led to deadly consequences for thousands of children. He also shows how the disaster impacted contemporary healthcare policy and law, including why pharmaceutical companies don’t want to produce lifesaving vaccines.

Deborah Blum’s The Poisoner’s Handbook chronicles the start of forensic toxicology in the 1920s, dividing the book into chapters, each of whose theme is a poison. In spite of this seeming segregation of cyanide from arsenic or methanol from radium, Blum links all of them together with several different stories drive the book: the plight of Dr. Norris, the first Chief Medical Examiner of New York City; the rise and fall of Prohibition in America; and numerous criminal cases from the time. Finally, the interface between science and society is wonderfully illustrated by the struggles Dr. Norris and his team initially faced in getting anyone to understand the significance of their findings, both in legal courts and the US as a whole.

Finally, I present to you The Microbe Hunters, a 1926* book by Paul de Kruif. This one emphatically shows the frustrating, though rewarding, nature of scientific inquiry as de Kruif describes the first half-century of microbiology, from the discovery of the microscope to the first treatment for syphilis. His excitement about science is palpable throughout the course of the book; reading it really feels like you’re listening to de Kruif talk about old friends over a cup of coffee. Though ostensibly focused on the development of microbiology, you learn about the scientists themselves: Pasteur was kind of a jerk; Koch was meticulous; Leeuwenhoek was obsessive.

These books are just the tip of the iceberg for this genre: there are ones about HeLa cells (The Immortal Life of Henrietta Lacks), cancer (The Emperor of all Maladies), malaria (Fever), surgery (Complications), and many, many others—they’re piled in the “To Be Read” part of my bookshelf, crowding the novels that are also begging to be devoured. In spite of how many I own, every time I stop by a bookstore, I can’t help finding one more that I just have to have.

*Note: because it was published in 1926, there’s a hefty share of racist phrases in the book. Consider yourself warned.