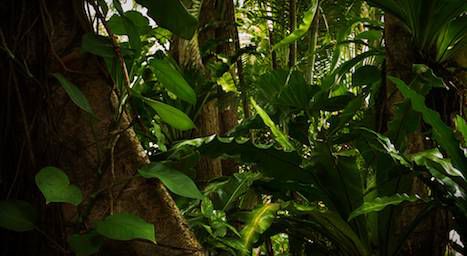 Who the hell decided it was a good idea to write about plants as terrifying monsters? My first experience with this was smack dab in the middle of my Goosebumps phase when I read Stay Out of the Basement, where two siblings suspect that their scientist father may not actually be their father, but rather a crafty plant that has taken on his likeness.

Of course, I know that this wasn’t the first time an author had written about evil plants, but that story planted a seed of fascination inside of me (get it?) that’s refused to die. As far as fictional monsters go, plants may not be able to physically chase you down, but let’s be real here – it would be impossible to hide from them. They’re everywhere, and they’re so commonplace that they can sneak through our lives almost completely undetected. Just this afternoon, a coworker commented on a potted plant that we’ve had in our library office for YEARS that I completely forgot about. (The thing’s still alive too, despite the fact that no one’s watered it in months. I don’t trust it.)

Rioter A.J. O’Connell shares my bizarre fascination with murderous plant stories, but if you’ve read A.J.’s list and still aren’t paranoid enough about the local plant life rising up to snuff out all of humanity, I have a few more books to freak you out.

A group of carefree college students vacationing in Central America embark on a day trip through the rain forest to find one group member’s missing brother, but what they actually find is an ancient ruins site inhabited by a sentient species of tropical vine. How sentient you ask? These vines can move on their own, burrow under people’s skin, set deadly traps, and perfectly mimic human voices. It sounds bizarre, but Scott Smith makes this survival horror story really plausible and REALLY gory.

How screwed are we? These vines only live in a remote area of the Central American jungle, but these things can mimic human voices! Once the plants start talking, we might as well just give up.

The Caretaker of Lorne Field by Dave Zeltserman

All that stands between us and the end of the world is Jack Durkin. Jack is the ninth generation of his family to tend to Lorne Field, which involves pulling the weeds out of the ground, day after day, until the first frost of the year. But what Jack’s pulling aren’t weeds. They’re really Aukowies, cleverly disguised monsters with razor sharp teeth that will keep growing and growing until they’re able to overrun the world. Problem is, no one has ever seen an Aukowie, because none of the caretakers have ever allowed the weeds to grow that big.

How screwed are we? Depends on if you believe Jack. Are the Aukowies real? Or is Jack simply delusional? Read this book, and then let me know what you think, because I still can’t decide. We can barricade ourselves in a basement together and discuss.

Wicked Plants: The Weed That Killed Lincoln’s Mother and Other Botanical Atrocities by Amy Stewart

This isn’t so much a work of narrative nonfiction as it is an extremely fascinating historical A-to-Z encyclopedia of Mother Nature’s most offensive and dangerous plant life, complete with ghastly illustrations and lists of symptoms. This is the type of book that will have you annoying your friends and coworkers with questions that all start with, “Hey! Did you know that…?”

How screwed are we? Considering all of these plants exist in real life, and are spread all across the globe, I think its best if we just stay inside for the rest of eternity armed with face masks and weed killer.

The Hungry Septopus by Satyajit Ray

This children’s story from India tells of a botanist with a collection of carnivorous plants including a rare Septopus, which looks like a 10 foot tree with seven grasping tentacles. The Septopus used to be able to subsist on a couple of chickens or a small goat per day, but now it’s tasted human flesh and it’s gotten even hungrier. Part of the Puffin Treasury of Modern Indian Stories.

How screwed are we? Okay, technically the Septopus doesn’t kill anyone in the story, but it’s certainly not for a lack of trying. However, I think as long as we don’t go rooting around (ha! get it?) in the jungles of Nicaragua, or this botanist’s greenhouses, we’ll be okay.

“The Lonesome Death of Jordy Verrill” by Stephen King, art by Bernie Wrightson

This is one of the five stories included in the comic book adaptation of the Stephen King/George Romero film Creepshow, which introduces us to the concept of alien space plants. Jordy Verrill is a lonesome lunkhead farmer who finds an asteroid in his field and gets meteor gunk all over his hands. The gunk spreads and turns into some kind of space-invading crabgrass that takes over his house and his entire body. That’s the kind of luck that’s spelled B-A-D.

How screwed are we? The alien crabgrass spreads best when it has water, so, yeah…we’re fucked.

Have we missed any monstrous plant stories? Drop us a line (or a vine…) and let us know!