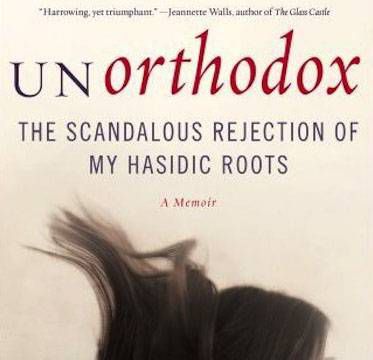 I could spin this as a post about the mysterious nature of faith and my fascination with the things that human beings believe in and practice, but if I’m really honest–with myself and with you, dear reader–what it’s really about is voyeurism. Having grown up in a midwestern protestant congregation–possibly the most mainstream of mainstream groups–I relish “losing my religion” memoirs for the glimpses of long-protected secret rituals and the explanations (and often critiques) of teachings and conventions that couldn’t be further from my own experience.

My feminism is showing here, too, as most of the memoirs I’ve read about leaving faith communities were written by women whose actions were motivated by gender inequities, both perceived and prescribed. In fact, now that I think about it, I’m not sure I know of a “losing my religion” memoir written by a man, though I know they must be out there, so if you have one to recommend, please holler back in the comments.

For now, here are a few of my favorites. 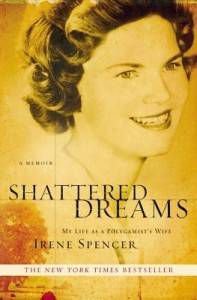 Shattered Dreams: My Life as a Polygamist’s Wife by Irene Spencer

Before there were suburban homes with shared back yards a la Big Love, there were rickety shacks in the Mexican desert and lives marked by constant struggle, abject poverty, and running from the law. Polygamy is illegal, you know, so when the government raided the FLDS village where Spencer lived with her husband and several sister wives in Arizona, the family fled south. Years after her dramatic escape (members of the church are taught that leaving is a sin and that violence against those who attempt to leave is justified), Spencer recalls the emotional abuse, institutionalized sexism, and constant competition she endured in the name of religion.

It’s heartbreaking stuff, and the intimate details of Spencer’s relationship with her husband–and the rules that governed their interactions–are shocking and quite sad. Pair this with Carolyn Jessop’s Escape for a more complete picture of the evolution of the FLDS community–though it’s the group we hear about most, it is actually a small sect of Mormonism–and the powerful men who run it. 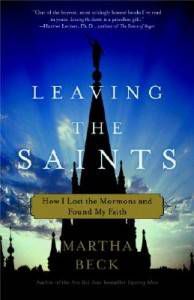 Leaving the Saints: How I Lost the Mormons and Found My Faith by Martha Beck

Remember that guy you knew in college who told you all about how amazing his fraternity’s initiation rites were but refused to dish the details because he was certain his brothers would magically find out and come after him? Replace fraternity with church and initiation rites with rituals that are purported to have eternal consequences, swap the frat boy for a feisty-as-hell adult woman, and you’ve got Martha Beck’s memoir of leaving the mainstream Mormon church.

With great chutzpah, Beck, whose father was a very influential figure in the Church, details the sexual abuse, crimes, and cover-ups that led to her questioning of authority and ultimate decision to defect. She breaks something like nine hundred different rules by dissecting tenets of Mormon theology and writing about temple ceremonies that are so secret that church members enter into them knowing they may suffer the penalty of death for revealing them. It’s terribly fascinating in that way that makes you feel like you’re seeing something you’re not supposed to see, but you can’t look away. Leaving the Saints is about two-thirds memoir, one-third self-help, and the memoir portions are markedly better in terms of the quality of writing, but let’s be honest–we’re not reading memoirs like this for the writing. 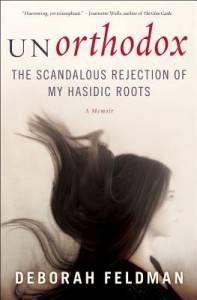 Brought up in the Satmar Hasidic Jewish community in Brooklyn, Deborah Feldman was taught that a woman’s place was in the home (girls in the community stop school after 11th grade because it is believed that any further education is unnecessary and only likely to cause trouble) and that she–and the rest of the community–were reviled by outsiders. There was a rule for every part of her life–right down to how she could wear her hair and what she could read–and her family valued silence and suffering over almost everything else.

Inspired by the strong female characters she discovered in books she snuck home from the library and hid behind her dresser, Feldman slowly accepted her doubts, embraced her feminist impulse, and, after enduring countless humiliations and a painful arranged marriage at the age of 17, eventually ginned up the courage to take her son and run. Now 25–and two years into her life in the secular world–Feldman pulls back the curtain on a most private religious community in a thoughtfully written and pleasantly well-measured memoir that rings all the right bells. Come for the curiosity, stay for the literary references.

The religious exposé is a close cousin of the “losing my religion” memoir, and it’s a genre I find equally irresistible. If you prefer investigation over personal reflection, check out John Krakauer’s Under the Banner of Heaven, Gina Welch’s In the Land of Believers, and Dennis Covington’s Salvation on Sand Mountain.

Now, what have I missed? If you share this particular obsession of mine, I’d love to know about your favorites.