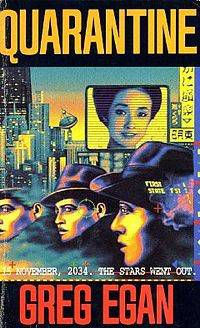 All good fiction should be challenging, and a great way to challenge your readers is to ask them to believe the almost-impossible.

In Greg Bear’s science fiction novel Eon, the Earth has a near encounter with a very unusual asteroid – not the type that slams into our atmosphere and explodes with one of the loudest noises in history (an unsettlingly non-fictional phenomenon), but the kind that has been engineered by human hands. How? Because it’s from humanity’s future. Not so great a speculative leap from the average Star Trek episode, but it’s inside the asteroid where things get a little crazy. It’s hollowed out into 7 chambers, and the last forms the end of a tunnel extending further than the back wall of the asteroid, making it bigger on the inside than the outside. This tunnel extends along a straight line towards infinity. It goes on forever.

Engaging stories are driven by good characterization, but speculative fiction – especially the genre that is commonly known as ‘hard science fiction’ – is allowed to bend the rules of literary physics. Hard sci-fi takes the wackiest theories from cutting-edge science and plays a cosmic game of What If, to see what effect it will have on the story’s protagonists. The more they struggle with it, the better the story usually is.

I’ve been besotted by Big Idea science fiction from an early age, admiring its ability to outwit my apparently feeble imagination, to introduce a sense of wonder into my reading in a way that hand-waving, magic-powered “fantasy” writing couldn’t quite manage. It’s one thing to be shown a world in a different universe, and quite another to be shown a version of our reality with a few mindboggling tweaks.

Eon asks, what would happen if the Cold War never ended and the human race went to war over an infinitely big piece of real estate? Elsewhere, the questions are even wackier. What would happen if a spaceship couldn’t stop accelerating, dilating onboard time to such a degree that the crew soon found themselves approaching the end of the universe? (Tau Zero, Poul Anderson.) What happens if humans could build a ‘space elevator,’ a cable fixed to a planet’s surface that extends tens of thousands of miles into space, allowing spaceships to save fuel by physically hauling themselves up and out of the planetary gravity well? (The Fountains of Paradise, Arthur C. Clarke.) And what would happen if it were sabotaged by terrorists and fell to the ground, wrapping itself two and a half times around a planet as it came down? (Red Mars, Kim Stanley Robinson.)

My favorite gonzo-crazy piece of hard science fiction is born of the wonderfully counterintuitive field of quantum theory, without which we’d have no explanation for everyday technology like transistors, lasers, or the humble light switch. At the heart of quantum theory is wave-particle duality – a process in which the act of observing something changes its physical reality. In Greg Egan’s Quarantine, human beings look out into the universe with their telescopes, observing distant parts of the universe, and in doing so, they “force” those places into a single state of existence, A or B, instead of a more common, probabilistic, simultaneously-A-and-B state that most of the galaxy exists in. Human beings observe the universe, locking it into a single physical state, killing off untold numbers of species that exist in a more natural indeterminate states, committing mass-xenocide…and to prevent further bloodshed, the Earth is sealed off, imprisoned by a screen that even light can’t penetrate. We’re the bad guys, and this is how the rest of the universe punishes us.

The Big Ideas are, of course, far from being the whole story. When hard sci-fi goes astray (as it all too often does), it forgets the cardinal rules of storytelling. We need to care about what happens to the people involved, even if they turn out to be jerks. Those same people must be on a journey, real or metaphorical, and they must struggle to complete it, pitted against themselves and/or against others. The story should begin somewhere interesting (near the end is always a good bet), go somewhere meaningful at a compelling pace, and not outstay its welcome. And most important of all for hard sci-fi writers, it shouldn’t wallow in over-descriptive self-indulgence. When your world is a whole heap of crazy, it’s all too easy to feel you have to explain it all.

Perversely, audiences like feeling baffled. (Take the first episode of TV show Lost, which completely relied upon it.) Yet we also want the eventual answers to fit some kind of semblance of reality – and that’s the appeal of a scientifically grounded flight of fancy. It’s a puzzle and a challenge: how do we get from the world we know to this seemingly alien scenario we’re now faced with? The unspoken contract between reader and writer is that the answers are coming and they will “make sense” – and that means the writer has the freedom to push credulity to breaking point.

If it’s clearly not impossible (which it isn’t, because it’s not a work of magical fantasy) – how is it possible? That is what every hard science fiction story must answer, and the more impossible-sounding the premise is, the wilder the ride promises to be.