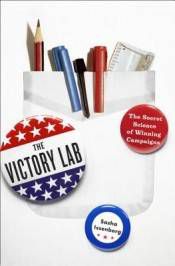 Although many genre weaknesses develop over time, I’ve recently had a very specific kryptonite because of the season: election season. I cannot stop reading books that expose the inside of current events and political campaigns. In the last month, I’ve read three that I highly recommend for my fellow political nerds.

The Gospel According to The Fix: An Insider’s Guide to a Less Than Holy World of Politics by Chris Cillizza

Chris Cillizza is a blogger for The Washington Post’s political blog The Fix, and this book is his primer to the world of national politics. Even for a journalist, Cillizza is remarkably balanced, focusing on how political issues play themselves out more than taking a position on hot-button issues or advocating for or against particular candidates. If the answers to questions like “What are the top ten issues that candidates should be discussing during this election, but won’t be because of the economy?” or “How is Ron Paul’s run for president like Friday Night Lights?” then this is a book you should definitely grab (and grab quickly — as with many blogs-turned-books, this one is so focused on the present many parts will likely feel dated after November 6, 2012).

The Victory Lab: The Secret Science of Winning Campaigns by Sasha Issenberg

There’s a battle going on in politics, and it’s not necessarily for the hearts and minds of voters. It’s a fight between proponents of mass media and experts in microtargeting, each trying to prove they know the best way to engage and persuade voters this November. In The Victory Lab, journalist Sasha Issenberg offers a history of how social scientists and political pollsters have developed new ways to target persuadable voters and try to win them to their side. The Victory Lab is a little on the dry side — it’s hard to make political polling and microtargeting sexy — but Issenberg gives it a pretty decent shot, profiling the people who have helped develop the data-driven methods that have been used recent political campaigns.

Game Change: Obama and the Clintons, McCain and Palin, and the Race of a Lifetime by John Heilemann and Mark Halperin

Game Change, journalists John Heilemann and Mark Halperin’s look at the 2008 presidential campaign, has already been mentioned here on Book Riot once, but it’s just so damn good it deserves several more mentions. Written in the approximately two years after Barack Obama was elected president, the book fits somewhere neatly between daily journalism and definitive history (as the author’s point out in their introduction), and is a truly fascinating and gossipy account of what it takes to run for president. I loved the way this book brought the presidential campaign to life and showed, over and over again, that politics is as much about people and personality as it is about policy.

Even after reading all of these books in the last month, I still want more. What other “inside politics” books would you recommend?